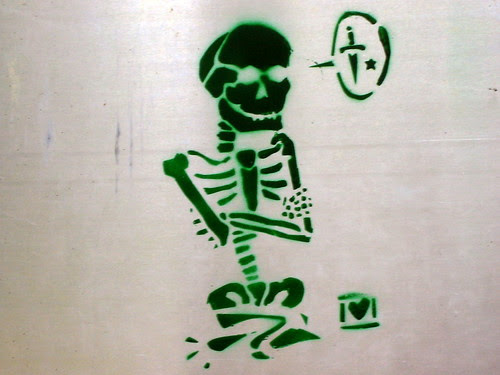 “Adjusting my finger-grip on the wrench-scarred nut, and painstakingly failing to achieve a proper torque, doffing my glasses for a more intimate inspection, and standing almost immediately to reach for the pliers that lay angel-sprawled on the cedar-board table, I scooped them up and quickly kneeled again, demolishing with my one good knee, the afore-rejected glasses.” Reason enough—in a mere sixty words—not to take off in some moronic headlining kind of dash into prose. The way it gets all goony and unnatural, because of its sour nineteenth-century history of being goony and unnatural. (A large part of me loves that thing about it, precisely.) Mannered prose, though, seeks a commitment us slacker poets cannot shoulder: think about having to go off burning that shitty fuse for, oh, several years, and just to complete a “book.” I get to thinking someone’s got a halter binding my nose or a bit chiseling my gob after about one dumpy canter around that track. If I can’t pull a different voice up out my bandanna, and within a line or two, I am one permanent bandylegged dog for sure.

The thing about ambition: one calibrates that instrument oneself. If John Ashbery writes one hundred pages (Flow Chart) in commemoration and grief in, say, a year or so—that’s not so ambitious as Ezra Pound sniffing the crabbid ordinary saliences out of John Adams’s letters in the course of what? A botch that’d begun to yank him around that particular barnyard? (Be wary of the projects begun in youth and sass and gladness. They start to dog one’s heels in the middling age. And one begins to think that dog somehow “important.”) A. “I smiled convulsively and in an instant was left / somehow darkened, though the pressure / was relieved and since then has never been a problem.” Or B.: “I was apprehensive in particular that / ‘natural history’ and ‘good humor’ wd/ be struck out, / Wrote John 34 years later.” (Defend the measurable ambition of A. Or of B.)

Truth is, ambition tends to dry the mucous and seize the joints. One’s style nosedives. One’s coefficient against drift and lassitude skyrockets. One eats hardboiled eggs and runs a straight track mornings. Begins to see numerical meanings in the animal gruntings of the spurious, the immodest, the coddled. One caters to career-helpers. One strokes one’s own fuzzy boundary, Messiah-like. One’s polemical spottiness gets mistook for a kind of poetry. And in the unendurable final gelling of that terrible ambition: one becomes an ideologue of a period. A textbook bimbo. Or a textbook clown.

Tony Hoagland, in “Fragment, Juxtaposition, and Completeness: Some Notes and Preferences,” strains (a little) after a “usable terminology” and says: “fragment is the unit, juxtaposition is the method, collage is the result.” Which is precisely how we used to talk about the “image”—all coming out of that ambitious ideogrammist Ezra Pound. I rest my potlatch-grubby paw on a stack of Donkey Gospels and swear: we used to juxtapose things mightily (Picasso: bicycle handlebars + bicycle saddle = bull—there’s a textbook illustration for the simple.) One image nudges against another image to make something new, unforeseen, poetickal! (I note now how Hoagland fusses with the definition of “fragment” in the piece, suspecting, I think, that the new nomenclature’s in danger of toppling the argument. He says: “When you juxtapose two fragments next to each other, without transition, you get collage. In fact, when you place any two dissimilar units side by side—even complete sentences, even paragraphs—they acquire the quality of fragment . . .” Why the necessity of that “dissimilar”? Because he’s trying out the old hat idée reçu on for size, and it’s looking a little “funny.”)

I used, briefly, to run with Tony Hoagland. Not run, drink. He lived in Ithaca for a year or two, in a house with a “one-half” in the address—114½ Mitchell, something like that, I pictured a shack behind another house, though I never visited—and worked (for a period) in one of the nearby state parks, Buttermilk Falls, or Treman. Typical hippie in the hills stuff. A summer “crew” job, meaning going off in a truck to dig or patch or plant something, with plenty of country to hide in, plenty of opportunity for reading, and napping. I think he told me he grew up in Cut Off, Louisiana, or a parent lived there. Or Slidell, I don’t know. We’d drink and get into arguments about different poets, though without any “ideology” (or “poetics”) causing the differences, simpler than anything like that. Obstreperous and serious about poetry, he. We went to Cortland one night for a reading—whose, I burned that gangly neural bunch, what I do recall is the bottles of red we kept going, and how Hoagland fill’d up the tank of the car for a buck or two, something about a broken pump, got away clean. He attempt’d to convince me that Darrell Gray was a grand overlook’d American poet. Or was it Chuck Miller? (Some alcohol-stymied number, vaguely “Iowan.”) A few years later, Hoagland went to the University of Arizona, got involved in the Sonora Review, and began writing rather intelligent review pieces. I started to see ambition, bleeding ambition. I got a few occasional pencil-scrawled ordinary index cards post’d to me, and we stopped writing, the way people do.

Theo Scratcher writes: “All the marks here of a rhetorical ninny. Though I know you like “exploratory prose,” it compleatly disfigures a poor soul to make a usable stretch of fence out of such tossed-off hay-baling wire. You skitter off sideways like a crayfish. Why, if you going to make a point, and a mark, and a name for you bad ambitious self, you got to grab an idea by the tail, chuck it inside some ordinary gunny sack, and beat at it with several consecutive paragraphs of you baddest bluntest prose. To a bloody pulp of an idea. If you aim to become a poetry marketeer, you needs an instrumental prose. Prose of a tool.”