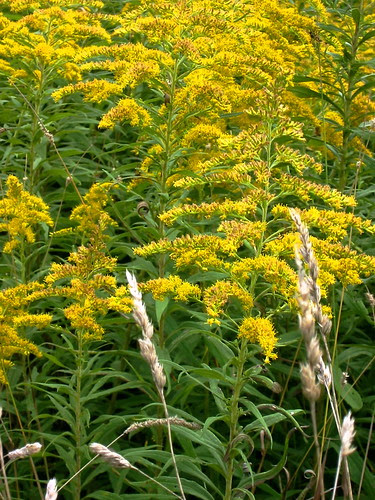 Completely dumbfound’d to learn of the death of Deborah Tall, of cancer, aged fifty-five. I fumble with the early books—Eight Colors Wide (London Magazine Editions, 1974) and the one we printed at Ithaca House, Ninth Life (1982). For five years in the ’seventies she’d lived on the island of Inishbofin off the west coast of Ireland, then she’d returned to the States and earned an M.F.A. at Goddard. I think the first piece of Tall’s I read, “Three Anecdotes,” the first poem in Ninth Life, probably convinced me we should publish the book:

We made love in a field outside Gort
while the population was at mass.
You wanted to be caught by Christ himself
I guess, incinerated on the spot.
No one noticed. A cat
stared at a quivering leaf and wisps
of chimney smoke rose from the empty houses.
I discovered what nettles were when they
touched my thigh and stung. You laughed
at my surprise then drew me closer
while clouds moved in single-file from the sea
and assembled ahead. I stared abashed.
You said I’d learn to love this country.
Bordering tulips stammered and snapped.

We developed a yen for scaly fish
and bottom feeders. I learned to skin
still wriggling eels and soak the hard crust
off fragach. Plaice fought in my oven.
I slammed the door, dragged my line
on the sandy bottom again to snare
flounders unawares or perhaps a crab.
But what came up gave battle, a cuttle
spraying its camouflaging spit.
Inky poison just missing my eye and once
in the boat its tentacles grabbed at my boot.
I watched its organs through transparent skin
turn purple, blue, then green, a bright bouquet
of dying taking, as always, much too long.

You found a younger girl for lover so turned
me into woman overnight. Deep lines
appeared at my eyes and mouth, but that’s just
“anecdotal,” as the doctors say. Aging
was anyway overdue. By afternoon,
snow wiped out the road. Still I drove you
to the airport for your plane, navigating
the unbordered white by hearsay and respect
for what lay buried. Unaccountably
your laughter turned to dark hysteria.
I swerved. “Go on, we’re late,” you recomposed
yourself, lied and said you’d be all right.
Do we choose to leave as implausibly
as we choose to stay? Your face turned toward the gate.

If, today, I see the Plathisms I ignored twenty or so years back, typesetting the words in a job stick, or the tiny sentimentalist excesses, it hardly matters. I see, too, precision and narrative swiftness, how things change between people limned with humor and surety. There’s present, too, the way of telling a story (or making an argument) whilst leaving things out—one of the techniques of the “lyric essay” that Tall and John D’Agata defined and promoted in the pages of the Seneca Review.

We put together a reading for Deborah Tall in the Ithaca House gallery at 108 North Plain Street in Ithaca. In my copy of Ninth Life is written March 25, 1982. We raced to finish the book (toward the end, I remember a day of waiting for a possible telephone call from Robert Penn Warren—Tall, who was friends with Rosanne, Warren’s daughter, had apparently asked him rather late for a blurb, and suggested he might call), borrowed a hodge-podge of chairs, supply’d some wine. Tall had an interview for a teaching job at Hobart & William Smith, up the lake in Geneva, and a couple of people on the hiring committee—Jim Crenner, who, with Ira Sadoff, founded Hobart’s Seneca Review in 1970, I recall—came to the reading. She read with a kind of quiet force, clear, even, self-possessed, steady.

I saw Tall rarely (never, I think, after I departed Ithaca in 1986). I recall dinner in Zorba’s, a Greek restaurant in Ithaca, before a Seamus Heaney reading, and, my hermit-like declining to attend the post-reading brouhaha (I sensed, too, that Tall, who, I think, ’d known Heaney in Ireland, had her own petty demons to confront). I did read her books—The Island of the White Cow: Memories of an Irish Island and From Where We Stand: Recovering a Sense of Place with pleasure, and fossick’d the excellent Poets Notebook: Excerpts from the Notebooks of Contemporary American Poets. And admired the Seneca Review, one of the most open and ecumenical journals in the increasingly parochial and stingy U.S. poetry world, and one that’s long made it a practice of publishing large numbers of translations.

That she and her work not go unnoticed.