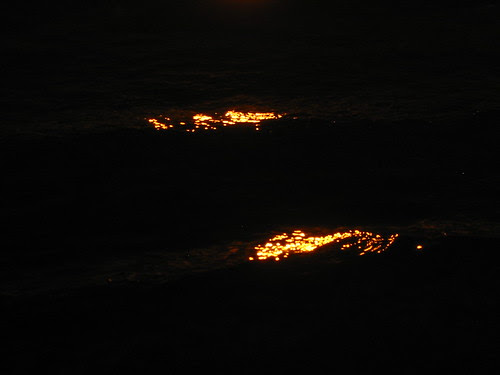 Charles Bernstein, in The Brooklyn Rail, in a squib mostly concerned with Bob Dylan’s Chronicles, claims Hart Crane’s the “second wave modernist poet” who “bears the closest resemblance to” Dylan. Besides being ass-backwards (I think we’re talking about Dylan, not Crane), one wonders who else fills those vaunted “second wave” ranks. Of course, Bernstein also uses the wordy and awkward is redolent with (he must of loined it off Silliman who, coincidently, writes about the Bobbo on the exact identical day, and is a connoisseur of such hyper-“correct” and ear-grating grammatical duds—Silliman’s piece, whilst ostensibly about the new CD Modern Times, avoids saying anything about that, music, words, or melodies, shuffling off into a no doubt Google-researched cobble-together of the history of Dylan’s bands.) Bernstein, before a final-line exhortation to “Bob” to “grow up” (that is, “we love you, grow up”—nodding studiously, though enigmatically to Frank O’Hara): “Dylan’s early work is redolent with Adolescent Sublime.” Indeed. So the ossified (read: done for) (always) lament them wild lost youths.

Bernstein’s complaint with Dylan is the old one, the hideous ur-complaint, the one “Bobby” always shucked off: sing us another protest song, be our leader, tell us how to live. (Which is to say: “stand still.”) According to Bernstein, Dylan’s “not so much apolitical as anti-political.” Dylan’ll have none of it, refuses that rôle, or any (and knows everything is a rôle). Bernstein, another shape-shifter—L=A=N=G=U=A=G=E clown and Henny Youngman figure, joker, “bad” poet and defiant doggerelist, librettist, postcolonialist, and “born-again sentimentalist” of the post-9/11 immediate aftermath (see: “Report from Liberty Street” with its dopey refrain: “They thought they were going to heaven.”) Oddest note: that Bernstein, veteran of the post-’sixties (1966) French theory fallout—Death of the Author, signifier pouncing on signified (and missing), the construct’d self, yadda yadda yadda, would so plaintively note that “much of the effort” in Dylan’s Chronicles “is directed at throwing the overly curious off the trail of the ‘true’ person behind the songs.” As if Bernstein himself’d pounced and missed. (Here: Billy Ray Cyrus’s Achy Breaky Heart music in the background.) Maybe it’s Charles Bernstein, the gruff earnester, who shouts it out mid-disc of the Rolling Thunder Revue (1975)-era Dylan: “Play a protest song.” And Dylan, laconically, dry-snarly, dismissive: “Yeah, here’s one for you,” launches into the lament “Oh, Sister,” as if to say, “Oh, brother,” or Snoopy-style “Good grief.” What’s the Oscar Wilde line?—“To get back to one’s youth one has merely to repeat one’s follies.” Some need repeating.

Javier Marías (Your Face Tomorrow: Fever and Spear): “There is a taste today for exposing oneself to the base and the vile, to the monstrous and the aberrant, for peering in at the infra-human and rubbing up against it as if it had some kind of prestige or charm and were more important than the hundred thousand other conflicts that besiege us without their ever plumbing quite those depths. There’s an element of pride in all of this too: you plunge into the anomalous, the repugnant and the wretched as if the human norm were respect and generosity and rectitude, and we had to make a microscopic analysis of anything that deviated from that norm; as if bad faith and treachery, ill will and malice did not form part of that norm and were the exception, and therefore merited all our effort and attention. And that isn’t true. It’s all part of the norm, and there’s no great mystery about it, no more than there is about good faith. This age, however, is devoted to the silly, the obvious and the superfluous, and that’s the way it is. Things should be the other way around: there are actions so abominable and so despicable that their mere commission should cancel out any possible curiosity we might have in those who committed them, rather than creating curiosity and provoking it, as is the imbecilic way of things now.”

A note writ by Dr. Johnson, discovered in a copy of Michael Drayton’s poems: “I could have written longer notes, for the art of writing notes is not of difficult attainment.”