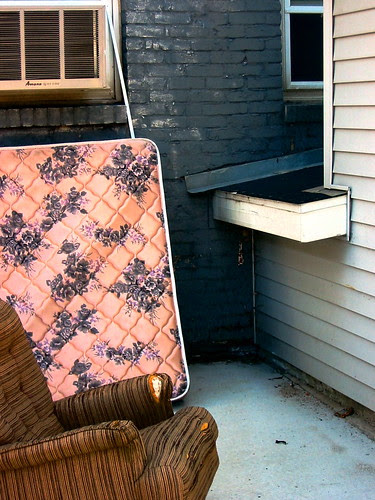 In order to make an object a fact of art, it is necessary to extricate it from the facts of life. To achieve that, it is necessary, above all else, to shake things up . . . It is essential to tear the thing from the set of customary associations in which it is lodged. You must turn the thing like a log on the fire. In Chekhov’s Notebook (I don’t have it at hand) there is such an example. Someone walked down a side street each day for either fifteen or thirty years. Every day he read a sign he thought said, “Big Selection of Sigs” [a kind of salmon] and every day he thought: who needs a big selection of sigs? Finally, the sign was taken down and put on the wall sideways. Then he read: “Big Selection of Cigars.”

A poet takes all the signs down from their places. An artist always foments the revolt of things. In the hands of poets, things revolt, throwing off their old names and taking with the new name a new face. The poet uses images, tropes, similes; he calls . . . a fire a red blossom or he attaches to an old word a new epithet or, as Baudelaire says, “The carrion raised its legs like a woman for shameful caresses.” In this way the poet makes a semantic shift. He wrests the concept from the conceptual set in which it stood and transfers it, with the help of a word (a trope), to another conceptual set. Thus we feel newness, the location of the object in a new set. The new word fits the object like a new dress. The sign has been taken down. This is one of the ways of turning an object into something which may become material for a work of art.

Is it in Tolstoy’s “The Death of Ivan Ilych” that objects, furniture mostly, become increasingly animate, the ottoman (pouffe?) or some sort of low chaise seeming to throw the unsuspecting Ivan out of it? [Yes: “on her way to the sofa the lace of the widow's black shawl caught on the edge of the table. Peter Ivanovich rose to detach it, and the springs of the pouffe, relieved of his weight, rose also and gave him a push . . .”] Some Russian switcheroo I recall, whereas Ivan becomes object himself, slunk into the reaches of a bag. Shklovsky himself—in a slim (though deadly) argument against using art for propaganda purposes (declaring “I am going to defend propaganda in the name of propaganda” and that “Propaganda, poured out into the air . . . is ceasing to be felt. What is taking place is an inoculation against it, a certain immunity”—thus blindsiding those, like Trotsky, who’d counter-argue against art’s purity)—says: “If you take hold of a samovar by its stubby legs, you can use it to pound nails, but that is not its primary function.” No ignoble slouch of a word-slinger himself, Trotsky’d referred to Shklovsky as “a very capable high school boy who had a very evident and quite ‘self-sufficient’ intention to ‘stick a pin into our teacher of literature, a noble pedant.’” (In an article titled “The Formalist School of Poetry and Marxism”—directly attacking Shklovsky’s “Ullya, Ullya Martians,” wherein he (Shklovsky) lists five propositions to demonstrate the independence of art from life.) The Futurist ditty: “New form gives birth to new content.”

Theo Scratcher writes: “Engagé or enragé? It seems to me that if one desires an art that is something more than a sublime doodad, a temporary distraction, a carnival ride replete with greasy mechanic-operator who pockets the dix mille balles straight into the bib of some brand-name overalls, then that art must taunt and provoke and go straight for the jugular of the existing distractions (read: other claimants to the art of the day). By such means is it possible to rid the museum-musts of the contemporary, and return art to its part in the everyday struggle, to make an adversarial art of irruption and dialogue, the most “present” thing there is. To say, you boys and girls pipe down (subtext: we are doing art here) is a platitudinous mockery of the art’s raison d’être and smacks of the most oafish traditionalism, contrary to avant-garde thinking. To announce oneself a “post”—beyond the avant-garde moment (it exists only in a moment, is constantly recouped (cut short) and recuperated (recovered as material thing, denied existence as action)—is to admit defeat in advance.”