Drifts of a Thing 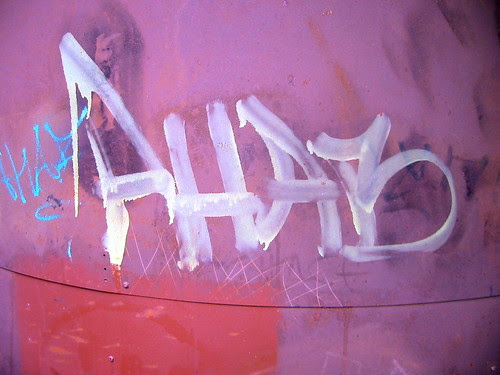 Fussing through a newish book by Raoul Vaneigem, Journal Imaginaire (La Cherche Midi, 2006), I am struck (again, instinctual contempt, involuntary nausea) by what I see as a kind of French sanctifying of “La Poésie.” That manner of summing up: tout cela, c’est de la poésie, making tout cela unspeakable, beyond any consideration excepting awe and obeisance, couched up in some stratospheric airy-féerique land with the cloud-cuckoos. If I hadn’t flung the book back into the black morass (or, hopper—it “churns”) of the library, I’d offer up a quotable. I did slip away with Vincent Kaufmann’s newly translated (by Robert Bononno) Guy Debord: Revolution in the Service of Poetry (University of Minnesota Press, 2006). Wherein, curious about Vaneigem, I note that he got accused by Debord of being something of the “head of the ‘navel gazers’”—that is, a “reformist” leader who acted against Debord’s expressed refusal to see the Situationist International become “an ideology or object of contemplation.” Rather like La Sainte Poésie. Object in lieu of action. And somewhere out of the background of these cerebral rumblings (or mimings, one is never certain one is “thinking”) comes a drunkard and a beggar (Marías is full of beggars, and of gypsy girls and three-legged dogs, unholy dejecta) whose path I crossed near where the rue Pascal becomes a tunnel (under what street?), a sloppy, stumbling man, almost Anglo-Saxon in what appeared a rough animal pelt. He stopped in front of me and made a gigantic fist, and I briefly feared some mundane violence’d ensue. He plunged that fist skyward and roared an utterance that sounded like “Et le ciel si cruellement bleu!” For years I attempted to identify the phrase, thinking it a Baudelairean fragment, a splendid challenge to the sanctimonious (abstract) French poesy (that carousel). And to “think” how Guy Debord drank. A long (stretching out its neck) notion that drinking, too, is a kind of dérive. Vehement, voluntary, tout seul drinking with a vengeance against order and clarity. The drinking that draws out the inherent displacements of the inner landscape, movement and escape, a psycho-bibitory journey. (See Edward Phillips’s 1696 New World of English Words, wherein he defines the Bibitory Muscle: “the Muscle that draws down the Eye towards the Cup when we drink.” Avoiding all gaze beyond that of the bottle. Art and identity (each as non-monumental as the other) existing only in the practiced, unroving eye of the drinker. (I blague, though pas trop, to get insufferably French about it, to détourne my own insufferable Francophilia, that bug.) Jack Spicer is akin to Debord, counterpart and coeval—“A noise / annoys” is pure drinker’s détournement. Think of Spicer’s clandestine journal J. That refusal of the fixed identity.