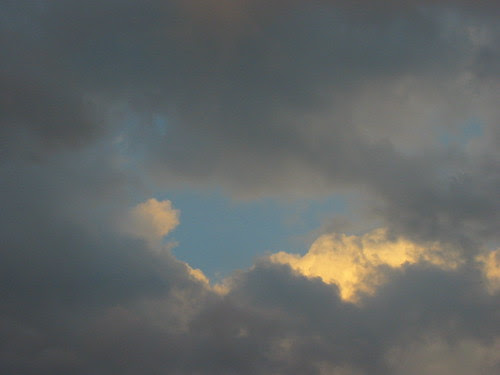 If, looking for material about Reverdy, I open Kenneth Rexroth’s book, An Autobiographical Novel, and note the “vertiginous excitement” he greeted Kandinsky’s Art of Spiritual Harmony with (followed by the “awful letdown” at reading “Kandinsky’s suety Teutonic metaphysic”), I know I’ll have to dash into that water, no matter that it is apparently—that “novel” tag’s apparently there to shoo away lawsuits—chock’d full of several varieties and half-varieties of that showy genus Truth. (Trying to recall Rexroth, who attended a conference organized by Al Poulin, Jr. in Rochester, New York, early ’eighties. He listed, gouty-legged. He and James Laughlin, two tall Joneses, and Eliot Weinberger, dapper and energetic, scarily smart, and Charles Plymell, whom I bumped, inebriated, through a late-night McDonald’s with, needing grub (Plymell talking to the congregation of semi-homeless drunks there assembled), and Ronald Sukenick with (in memory) a doughy post-acne face like Tom Hayden’s. I think other attendees or readers included Clayton Eshleman and Mary Oliver. I swear it against my phantasmagoria’d brow—things were less stratified then. William Stafford, genial, avuncular, kind, shooting photographs. I attended with Ithaca House wares, with Baxter Hathaway. Late that night, the molecular air pinging with drink, I tuned in the hotel TV to first reports of the bungled Iranian hostage snatch-back, “Operation Eagle Claw,” helicopters downed in the sand.)

Which is not what I’m talking about. Rexroth writes (though apparently the book is largely “dictated episodes and digressions into a tape recorder . . . aired on Pacifica radio stations KPFA and WBAI” and later transcribed) about how “out in the cow-country universities there were no courses in the seventy-seven and a half types of ambiguity. If you wanted to understand Apollinaire, you just had to read him until you did, and if you wanted to know how he did it, you just had to keep on reading until you’d figured it out. . . . We had no guides , but neither were we misguided.” And: “I met Sherwood Anderson, whom I discovered to be a distant relative. He not only took an interest in me, but unlike most older authors who take an interest in young ones he took a helpful and comprehending interest. He loaned me books to read, and he gave me a book by a friend of his—Gertrude Stein’s Tender Buttons. The explosively liberating effect of Tender Buttons on an adolescent modernist at the beginning of the Twenties is quite impossible to convey. Although I had deciphered poets like Pierre Reverdy, this was the first thing which seemed to me to be doing in literature what I was trying to do in painting. Today I realize that I was mistaken. Tender Buttons is in reality the poetic analog of Analytical Cubism, especially of the paintings of Juan Gris by a writer with a remarkably commonplace mind. Although I was mistaken about Gertrude Stein’s intent, she set me off on a program of “abstract poetry.” Some of this has survived, some of it has even been incorporated in poems written years later. It wasn’t so abstract as I thought it was, but doing it taught me a lot about writing.”

An Autobiographical Novel, first published (by Doubleday) in 1964, and subsequently expanded (in several complicated stages), carries Rexroth only into the early ’thirties. As Robert Duncan apparently asked after publication (in 1981) of a later chunk, Excerpts from a Life: “What did he have to say about us kids?” And think: if only one had Rexroth’s piquancy and pig-headedness and wit to saddle some of the mouthiest West coasters with! (Or: is Rexroth’s star tumbled somewhat out of the western sky? Is it partly due to a sense that he didn’t engage the second half third of the twentieth century with the ferocity he did for the first?)

(We all talk through our hats.)

Theo Scratcher expedites an odd tidbit: “And yet at the last Election the same S— having now gained the Additional Titles of M— and E— to promote his pretensions, becomes very officious in tendring us his Service in the Blogland; and with as little Invitation to our Pockets as ever we had to his Table, over the Bridge come his Horse and He (the principal Bloggers being not yet resolv’d which of the two do the actual Writing) and being encourag’d by some few male-content Renegado’s from amongst us, who like Whifflers came justling and making Elbow-room for him, he sets up for Himself, and will be our Representative, and put his hands into our Poems whether we will or no.”