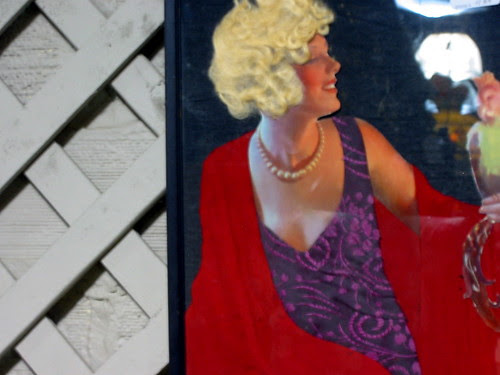 Jumpstart the work: I am writing a book called A Legal Pencil. It is allowing me to wallow in Gertrude Stein, a wallowable sort surely. For my titles, I am selecting words out of each paragraph of a Stein piece titled “Americans” in a yellowing book called Geography and Plays printed by the Four Seas Company, in Boston, in 1922. In that era when the turning of pulp to slurry at the paper mills got hurried along by hydrolysis (and the addition of aluminum sulfate) leader to papers besodden’d with sulfuric acid. The upshot: a chemically unstable paper, molecularly weak cellulose. Brittle book. A book that is liable to explode into fragments at the merest glance. I knew girls like that in my “younger” years. I doubt anyone ever looked at Gertrude Stein and fancy’d her liable to burst into fragments. The “Americans” paragraphs, short. If I continue with my book (see, I am besodden with doubts), it’ll be a long book. Book or opus? Obus is what the French called German artillery shells (“les obus boches commencent à pleuvoir”). Or, Apollinaire did. He was sort of Polish, sort of “laddish.” Read Lettres à Lou. Lou, a solid sort. I think Guillaume mentioned her thighs, cuisses monstrueuses. Though that’s not the word. Croupe? Like whooping cough? Poor Guillaume. Poor me. I detest the kind of faux-idiot-savant voice that’s inhabited me here. Mostly I find writing that hangs off a spectacle of voice rather annoying. (“A simple matter of ventriloquism” is what a novelist-friend said about a Paddy Doyle novel, and I never forgot it.)

Javier Marías (Your Face Tomorrow: Fever and Spear), on the life of a laugh, and its funeral: “Laughter creates a kind of disinterested bond between men, and between women, and the bond it establishes between women and men can prove an even stronger, tighter link, a profounder, more complex, more dangerous and more lasting link, or one, at least, with more hope of enduring. Such lasting, disinterested bonds can become strained after awhile, they can sometimes become ugly and difficult to bear, in the long term, some one has to be the debtor, that’s the only way things can work, one person must always be slightly more indebted to the other, and commitment and abnegation and worthiness can provide a sure way of making off with the position of creditor . . . The quality of that laughter, its spontaneity (its simultaneity with mine perhaps) has led me, on occasions, to meet a woman and approach her or even to dismiss her at once, and with some women it’s as if I’ve seen them in their entirety before even meeting them, without even talking, without them having looked at me and with me barely having looked at them. On the other hand, even a slight delay or the faintest suspicion of mimetism, of an indulgent response to my stimulus or my lead, the merest suggestion of a polite or sycophantic laugh—a laugh that is not entirely disinterested, but is egged on by the will, the laugh that does not laugh as much as it would like to or as much as it allows itself or yearns or even condescends to laugh—is enough for me promptly to remove myself from its presence or to relegate it immediately to second place, to that of mere accompaniment, or even, in times of weakness and a consequent slide in standards, to that of cortège.”

Notes (titles) to myself out of Attention Span, in two categories.

To locate a (library) copy of (and read):

To plunk down the money for (and read):