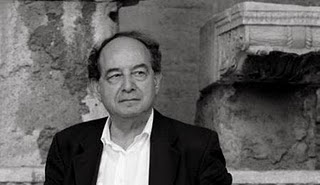 “Great poetry is essentially bête, it believes, and this is what makes its glory and strength”: Baudelaire, 1846. “Masterpieces are bêtes. They have a tranquil air like the very productions of nature, such as big animals and mountains”: Flaubert, 1852. At a distance of six years, one in a review, the other in a letter, and obviously unaware of each other, the two bards of the bêtise wrote similar phrases . . . It is not a matter of pure “foolishness,” as other languages are obliged to translate bêtise. But of something in which there lingers an obscure animal background, as if, on reaching its apex, art rediscovered something beautiful in nature, but veiled by an opaque film, impenetrable, and loath to take intelligence into account . . .

Recalling a number of American insistences regarding the necessity of stupidity, of lack of any comprising intelligence. See, say, William Carlos Williams’s Paterson-writ mot: “Knowledge, the contaminant.” Or A. R. Ammons saying: “I think a poet ought to keep himself just a little stupid.” Or see Ronald Johnson talking (out of the 1995 interview with Peter O’Leary) about Charles Ives (and Simon Rodia):

Ives is not that different from the Watts Towers. He was like me—he knew a lot about music, but he wanted to appear a naïf, to get back to where you don’t know anything about art. And then you construct something. I was trying to forget about music and then start all over again. Or you try to remember everything . . .

That split between the concomitant stances of “you don’t know anything” and “you try to remember everything” seeming to echo John Ashbery’s beginning lines to “The New Spirit”:

I thought that if I could put it all down, that would be one way. And next the thought came to me that to leave all out would be another, and truer, way.

clean-washed sea
The flowers were.

These are examples of leaving out. But, forget as we will, something soon comes to stand in their place. Not the truth, perhaps, but—yourself. It is you who made this, therefore you are true. But the truth has passed on

Is the Baudelaire / Flaubert temporal conjunct of bêtises the mark of a shift: the New World become fons et origo for European modernity? Calasso quotes Baudelaire calling Poe “the writer of nerves” (and one idly wonders if Frank O’Hara knew of that when he wrote “You just go on your nerve” in “Personism,” another instance of tranquility and “beastliness.”) Too, Calasso quotes Madame de Staël’s discriminating mot: “The bêtise and the sottise differ essentially in this, that bêtes submit willingly to nature and sots always delight in the idea that they dominate society.” (A difference that one is tempted to apply to writerly constructs and manners too: the processual bêtes of organic form versus the sots of the preconceit, of received form.)

Being the second item in Ronald Johnson’s collaboratory “gilding of the Buddha” with Peter O’Leary (see O’Leary’s moving memoir “Gilding the Buddha: My Apprenticeship with Ronald Johnson” in the 2008 volume, Ronald Johnson: Life and Works.) O’Leary writes that Johnson’s “‘cumulatively / illuminating’ gilding glimmers with poesis I could see, feel. Besides its luxurious syllables and homophonies, ‘Shadow’ consisted of two even words, such that ‘illuminating’ falls perfectly within the shadow cast by ‘cumulatively’ in the poem.” Isn’t the piece, too, a kind of ecliptic-flipping omaggio to Giuseppe Ungaretti’s tiny (and all-containing, all emptying) “Mattina”? Here it is:

In Littlefoot, Charles Wright translates it thus: “I empty myself with light / Until I become morning.” The sense of accumulating and voiding in high conjunct nigh inexpressibly put. (I think of Wittgenstein’s “When one does not force himself to express the inexpressible, nothing is lost and the inexpressible is contained inexpressibly in that which is expressed,” quoted by Czesław Miłosz in Unattainable Earth. And, again, of Ashbery’s “put it all down” shadowed by “leave all out” . . .) In a letter to O’Leary, Johnson thanks O’Leary “for our mutual lustration of the Big Bhu” and puts the moniker “Compression & Radiation” to the now-completed course of apprenticeship. Accumulate immensity. Hoard and spark. It’s a new day.

Four newish poems to be found in the recently-launched Blackbox Manifold, here.