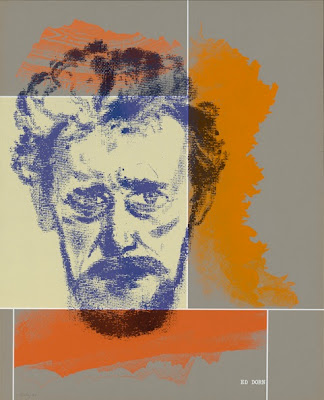 Nearly a half century back now, Guy Davenport making a summary of “The Visual Arts 1955-1965”:

The visual arts in the decade past have been gaudy, sassy, and pleasantly raucous. It may be that the avant garde is, as the Bryn Mawr girl said, passé; what she meant is that a loop has come full circle and the fumigations and épatements, of half a century back seem worth doing over. The scholars are already comparing the spliced bits of the loop. Kurt Schwitters, hero of the Merzbild, is now the father of the quoted comic-book page, since it turns out he was on to Pop when Roy Lichtenstein, the current master, was in rompers.
Thus a great deal of the decade’s energy is a discovery by the young that there was a revolution in the arts around 1906 that did not become Cubism or academic Surrealism. . . . The young turn back to the quaquaversal Francis Picabia (unknown to the Luce papers and fine arts departments and therefore still in fatigues and with smoking revolver), to the inscrutable Marcel Duchamp, and to that spirit among the Italian Futuristi and the German and Russian experimenters just before the First World War who saw in advertising, folk art, and the commercial ubiquity of groceries and hardware the symbols they could isolate and make eloquent.

And, of, particularly, the Pop effutiators: “They have done well to restage 1906, these pedantic reinnovators; even their studied parorexia pays into their account, for redolent vulgarity is their subject.” (All in a run-up to an extraordinary paean to Stan Brakhage: “American art has had four great masterpieces: Moby Dick, Leaves of Grass, The Cantos of Ezra Pound, and Brakhage’s Dog Star Man.”) What’s striking: how apt Davenport’s skepticism at the retread is now, too, in the Golden Age of Pedantic Reinnovators. See the endless rote variations on a theme of the dysgnosiac conceptualists, senselessly shuffling the glut.

Dorn speaks slowly and deliberately throughout these recordings, not only because he is largely speaking off the cuff (only the beginning of the first lecture is openly indicated as having been written in advance of the event), and often reading from external sources, but because he is attempting, over the course of these lectures, to synthesize a set of tools through which an engaged audience can navigate their immediate poetic futures. Dorn’s Olson Memorial Lectures aren’t simply attempting to curate the recent past in order to promote a certain perspective on late twentieth century poetics, but are doing so in order to openly intervene in then-present-day conversations.

Thus, circa 1981, in the fatigue of the prevalent confessionalist manner run amok, Dorn points to lines out of one of Olson’s final lectures (out of Charles Olson in Connecticut: Last Lectures). Dorn:

. . . the greatest thing he says in here, the thing that I think applies stringently to the present, is a little piece of advice which is almost terminal, and—it’s like a warning. And I can’t find it, but I remember it, and it goes, “Don’t write your own poetry. Write poetry.”* Don’t write your own poetry. Write poetry. Don’t be a jerk. Don’t opt for self-expression. Who cares? You’re nobody. Write poetry. That’s something. And if you’re not remembered, then that just means your name’s not Homer.

Pertinent words in an “era” of mounting neo-confessionalism, with abjectedness at a premium, and narcissism banging at the door . . . Of note, too, in Dorn’s initial lecture: a large excerpt out of a 22 February 1981 letter J. H. Prynne writes to Dorn, replying, in part, to Dorn’s interview of Tom Clark (in Little Caesar No. 11, 1980).** Prynne, presumably in homage to the Caesar reference, begins:

Amicus curiae salve!
Good to have your communiqué and some news and reviews. I must say I did find the Tom Clark rundown an interesting piece, I like his clarity and direct address to the matter, and I even begin to have a sense of how what I’ve mostly seen as vacuous could be used to define a significant vacuum. As with the Romans themselves, a secular state which made success a state religion must always be vulnerable to cults from the periphery, especially where some gnosis turns defeat into higher conquest, and claims distance from the forum as the index of counter-force.

A sentence referring, indubitably, to any and all claimants to any sort of ideological purity whatsoever, particularly that of the “edge.” Or the “bottom.” And, after confessing to “having speculated about cult & anti-cult as faces of a complementary opportunism” (every Official Verse Culture needs its Bernstein, every Bernstein needs its purported officialdom), Prynne writes:

But the commitment to opposition finally makes sense at such a level only with the gloss relating to power. Of course in the Jeffersonian ideal the informed and cultivated individual, well read in history and with an active mind, claimed influence and the influence was to be allowed a due power: to sway the consideration of thoughtful men. But because first Whitman and then even more Pound made such a deep misapplication of this idea the whole U. S. aftermath has taken a parody version in lieu, with the poet going for influence in such an excluded circuit as to make the claim to power a most peculiar joke, restricted mostly to a clientele of teenagers. Or that’s how it strikes an outsider. Grabbing at wisdom in the paranoid rip-off style the result freelance poetry activist sooner or later sets up his personal temple of culture and bids for his first zombie, or chela;*** . . . the relation can only be cultic, even when the PR is otherwise, because the rhetorical pressure of the product demands for the consumer a too-engrossed attention . . .

Of Olson, Prynne notes: “Olson is the prime instance of a man who saw Pound’s mistake and then pushed right on and made it. When I belatedly did meet him you know how shocked I was at the vulgar bullying deafness to reality he brandished, and his hook into what he wanted.” Prynne—now himself seemingly the object of sycophantic obsequiousness, and cultic fancy—claims a way out of such pretense and grab in “My own habits of skeptical sideways disinclination [that] thus veer over to the pyrrhonic, not so much in principle as in the day-by-day.” Recalling somehow, in its refusal of the usual perquisitum, the defiant counter-slogan of Bernadette Mayer: “Work your ass off to change the language & don’t ever get famous.”

** And, indirectly, to Clark’s 1980 The Great Naropa Poetry Wars. Prynne: “It is odd in retrospect that I never did lay hands on the Poetry Wars tome, it must have slid too fast into some other tomb . . .”

*** Here, reading the letter, Dorn inserts the explicatory “‘Chela’ being an Indic word for house slave.”