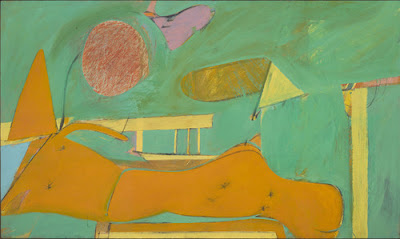 Why do you play such dreary music
on Saturday afternoon, when tired
mortally tired I long for a little
reminder of immortal energy?
All
week long while I trudge fatiguingly
from desk to desk in the museum
you spill your miracles of Grieg
and Honegger on shut-ins.
Am I not
shut in too, and after a week
of work don’t I deserve Prokofieff?

Well, I have my beautiful de Kooning
to aspire to. I think it has an orange
bed in it, more than the ear can hold.

With Donald Allen’s note (out of The Collected Poems of Frank O’Hara):

Dated December 3, 1955 . . . Kenneth Koch wrote: “RADIO is perfect. I was in the Cedar Tavern last night and Bill de Kooning was there, so I asked him if he’d seen your poem about his picture. He said, Yeah, is that right? He said, Yeah, but how can you be sure it’s about my picture, is it just about a picture? I quoted him ‘I have my beautiful de Kooning / to aspire to. I think it has an orange / bed in it . . .’ He said, ‘It’s a couch. But then it really is my picture, that’s wonderful.’ Then he told me how he had always been interested in mattresses because they were pulled together at certain points and puffed out at others, ‘like the earth.’” (KK to FOH, March 22, 1956.) First published in Poetry, March 1956.

This nonsense is only to tell you I love your poems in Poetry; as always, in that cutting garden of salmon pink gladioli, they’re as fresh as a Norway spruce. Your passion always makes me feel like a cloud the wind detaches (at last) from a mountain so I can finally go sailing over all those valleys with their crazy farms and towns. I always start bouncing up and down in my chair when I read a poem of yours like “Radio,” where you seem to say, “I know you won’t think this is much of a subject for a poem but I just can’t help it: I feel like this,” so that in the end you seem to be the only one who knows what the subject for a poem is.

Brad Gooch, in the O’Hara biography City Poet, quoting a 16 February 1956 letter to Michael Goldberg, seems (wrongly) to suggest that “Radio” was composed in Cambridge during O’Hara’s unhappy few months there with a playwright-in-residence fellowship at the Poets Theatre:

“Some times it seems to me that I’m operating myself by remote control from a broom closet in the Empire State Building but I guess I really am here . . . Before this there were a couple weeks of foul depression, gnashing teeth, pacing and boredom, when I felt that I would never, NEVER (like in those moves about concert pianists who’ve been in an accident) be able to play the typewriter again. But the presence of this Steinway you all gave me has finally asserted itself, and I now stagger from bed, stride to the desk, and begin my scales each morning, or almost each.” O’Hara’s sense of place was ameliorated by pasting to the wall a photograph of James Dean as well as by hanging a small de Kooning painting of a couch lent him by Fairfield Porter that had hung at East Forty-ninth Street. The painting appeared in “Radio,” published in Poetry in March . . .

O’Hara’s “Radio” is a plaintive thing, decidedly minor and likeable, oddly dated in the age of retrievable music forthwith. A slender contingency of radios runs through the O’Hara oeuvre: “I am sad / I better hurry up and finish this / before your 3rd goes off the radio / or I won’t know what I’m feeling” is how “On Rachmaninoff’s Birthday #158” rather amusingly begins (worrying loss even in its initial impetus). Or there’s the nod to immediacy (and its confrere regret) in the lines in “Poem Read at Joan Mitchell’s”:

and now there is a Glazunov symphony on the radio and I think of our
friends who are not here, of John and the nuptial quality
of his verses (he is always marrying the whole world). . .

Or there’s the mock-venerable radio, the instantly gratifying salvable “click” of it (out of “Ode (To Joseph LeSueur) on the Arrow That Flieth by Day”):

To humble yourself before a radio on Sunday
it’s amusing, like dying after a party
“click” / and you’re dead from fall-out, hang-over
or something hyphenated

Or there’s the genial / ironic outburst in “A Rant”: “To hell with the radio / let it rot!” There’s likely, too, some perfectly fetching argument to be made regarding O’Hara’s hierarchical nudging of painting’s visual “oomph” up to the heavens (think, say, of the lines “‘How closer than Frank to the cosmic bone / comes the bold painting of Fernand Léger’!” out of “A Sonnet for Jane Freilicher” or the faux-stagey parenthetical “(sometimes I think I’m ‘in love’ with painting)” out of “Adieu to Norman, Bon Jour to Joan and Jean-Paul”)—heavens higher than what the mere aural fastnesses of “the ear can hold.” That’s its own dreary music though.
Posted by John Latta at 6:46 AM