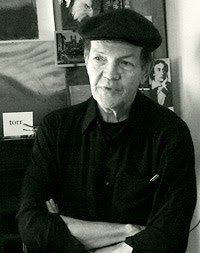 Cold, with cold’s tendency toward detachment. Lazing at the periphery of things. Think of Marianne Moore writing of being reviewed in The Dial by Eliot: “If bolstering by the profession can do one any good it certainly will advantage me.” I love the feigned fussiness of the ennui therein. Bolstering, who needs it? The order of the day: lassitude with a hint of torpor. A desire to hoe a singular row, tentatory and gradual, adhering to no gimmickry, no undue hoist in the blade. Moore, to Pound (9 January 1919): “My work jerks and rears and I cannot get up enthusiasm for embalming what I myself, accept conditionally.” That brave refusal of complacency, the gratifying certainty of its “finish.” Or any finish.

Out of some persistent documentary vein. Tom Clark’s lengthy reply in a 16 October 1979 interview “conducted by Ed Dorn” (out of Little Caesar No. 11, 1980) to Dorn’s remark “It strikes me that your generation is really embattled in a funny way. For instance, I don’t remember these kinds of fights between John Wieners and myself and Robert Creeley.” Clark:

There’s a whole lot of differences. First of all the growth of this group that you were in took place in an area far from an urban center. The writers that came to Black Mountain were from a real diverse set of backgrounds and they must have been feeding into that place a tremendous amount of divers energy.
Whereas this New York movement was really a combination of Tulsa plus an adherence to Frank O’Hara. It was much more single. In other words there was a lot less variety to begin with. Also the individuals in it were of nowhere near the same degree of strength or interest. When you compare Michael Rumaker and Wieners and [Fielding] Dawson and Creeley and yourself, all these individuals seemed to have expressed in their work at Black Mountain a certain degree of sense of the social and economic alienation that’s necessary in the American experience.
Nobody in the New York scene ever wanted to face up to that because we always could go uptown and hang around the edge of something rich. Black Mountain was the sticks, it never had any access to that stuff. I mean the dues that were being paid were significantly higher. It wasn’t part of this big hip poetry movement. It was this very straight little writing school. Talk about stringency, consider Creeley’s statements in Black Mountain Review when he starts talking about care: Franz Kline’s* quality of caring about things. It was almost like a critical test of concern that Creeley was giving, based on the fact that all these poet of the Establishment of his time—the ones that I was seeing at Ann Arbor—didn’t care, because it was too easy for them. They didn’t have to show that they fucking cared at all. They were on a network. And what St. Mark’s became was another network, another form of mini-establishment of its own. Which pleased people socially but didn’t have anything to do with the development of an angular sense of an individual as a writer. I thought the given behind Black Mountain, which Olson managed to get through to the people that were there, was that their own experience was their field but that there wasn’t any commonality of a readymade stylistic vocabulary that everybody was going to get to milk constantly. That you had to go back into your own, and the best that got produced was produced out of personal work experience and economic experience. In the best work that came out of Black Mountain there came across a consciousness of being put in a social corner to a certain extent, far from the New York cosmopolitan crowd, and you could read a lot of mid-American situation out of that.
Ed Sanders aside, I don’t think there was ever a legitimate social address in the St. Mark’s movement. I don’t mean the “polite society” sense of the term. There’s some work by Ted [Berrigan] and Dick [Gallup] in the early days when the poverty and joy of the East Side life came through in their work that was intelligible in social terms. For the most part, though, there was a total denial of the possibility of that being part of the content, and instead an emphasis on a kind of language-activity which I guess Trungpa** would describe as “playful.”
So when I look at Black Mountain, I look at every writer there having gone through a process that is one of the main things you’ve got to learn about writing, that is, how to incorporate the social experience into words. Whereas in the St. Mark’s scene, in keeping with the whole tradition that Allen [Ginsberg]’s talking about of Rimbaud and Artaud and everything else, it was the high of the strictly personal experience. This also includes the experience of personality, which of course is what this type of poet is supposed to become.
Those things played very little part in the rhetoric of Black Mountain. You’d have to go far to find an equal valuation placed on the intensity of personal vision or a personal high. Personally, almost everybody at Black Mountain was off in some fucking corner, walking their own personal plank, which was hardly to be celebrated.
The same is true when the place split up and dispersed into project such as Wild Dog***—the same is true of Wild Dog. The same basic social experience of routine American space and distance from the urban economic center.
Of course there’s an important exception, “personal” as he was, Frank O’Hara did have a lot of social reality in his poetry which came out of that special uptown thing he knew, and he carried it off that there’s nothing embarrassing in that, shit!
But I wouldn’t dignify this group of people that I came up with by even comparing them with Black Mountain because St. Mark’s was a school only in the loose sense that a salon becomes a school, not a school in the sense in which information is conveyed.
I think Olson’s main thing is that he hammered home the axiom that information about the world is your subject and you go and find a corner of it that you map out for yourself, and you find out about it, even if you have to go to some book maybe.
The use of books with Ted and the people I was with in New York was raw plunder. You didn’t read a book like Merk’s Westward Movement**** to find out about some agro-economic reality. You went to any book for lines that you could take and incorporate into your own work. That’s what you used books for!
The whole aesthetics of Black Mountain are much closer in my mind to a certain Thirties’ aesthetics.

Needed: a volume of Clark’s interviews.

For a sense of it, say—I tried to be careful, but the form would not have it. My care was the form I had given to it. How to care, that one does care? Care, it seems comes from several words, among them the Anglo-Saxon caru, cearu (anxiety) and the Old Saxon kara (sorrow). Is it moving with care through care, that it comes to?

And: “Somehow not to be accidental, not even enough or too much ‘accidental.’”

*** Wild Dog, is the mimeographed magazine founded in early 1963 and initially edited by Dorn (with John Hoopes) in Pocatello, Idaho. Twenty-one numbers through 1966.