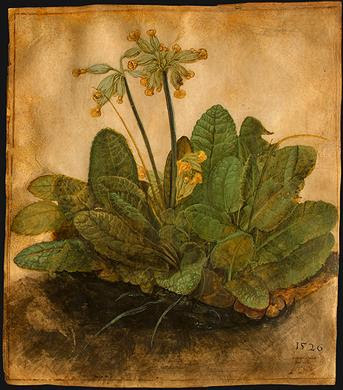 The slough of cold, its surly continuousness, and the day’s unemphatical and regular hum. To loll with a book and look is all my desire, damn all contrivance and effort. (Ronald Johnson, out of “Hurrah for Euphony”: “I spent years reading in the two huge volumes of the Dover Edition of Thoreau’s Journal to sharpen my eye and how it intersects with text. I learned how Henry David could set down the miniscules, then slip right into the unconscious, speculating about snakes in his stomach or eating a red raw muskrat.”) And Thoreau himself, in the Journal (29 April 1852), veering off an exhortatory antiphon for the newly conspicuous cowslip (“flower-fire bursting up as if through crevices in the meadow”) into the bigger surround itself, and off into the aery conjectural muster of what to do:

. . . the Season is most forward at the 2nd Div. Brook where the Cowslip is in blossom & nothing yet planted at home these bright yellow suns of the meadow in rich clusters their flowers contrasting with the green leaves—from amidst the all-producing dark-bottomed water. A flower-fire bursting up as if through crevices in the meadow. They are very rich seen in the meadow where they grow—& the most conspicuous flower at present, but held in the hand they are rather coarse—   But their yellow & green are really rich & in the meadow they are the most delicate objects. Their bright yellow is something incredible when first beheld. There is still considerable snow in the woods—where it has not melted since winter. Here is a small reddish topped rush (is it the Juncus effusus common or softrush?) now a foot high in the meadow with the cowslips. It is the greatest growth of the grass form I have seen. The butterflies are now more numerous, red and blue-black or dark velvety. The art of life—of a poets life is—not having anything to do, to do something.

(An urban rendering of that’d go somewhat like James Schuyler’s finally declarative “What”—“Why are they hammering / iron outside? And what / is that generator whose / fierce hum comes in / the window? What is a / poem, anyway.”) How do John Ashbery and Kenneth Koch put it, in the midst of a flurry of merely furnishing? “‘When I think that that chair / Once held Alice B. Toklas, I don’t give a fig for what I catch from the live-oak tree or the cowslip!’ Then the bathtub became silent as a desk.” (Out of “Crone Rhapsody,” a sestina: “all of the end-words are pieces of office furniture.” Too, each line contains “the name of a flower, a tree, a fruit, a game, and a famous old lady.”)

I see my aimlessly skittering tracks trace a trajectory: the “eye and how it intersects with text” deflected into “merely furnishing,” clarity and rambunct. Thus the “flower-fire bursting up” out of the “all-producing dark-bottomed water.” Thoreau, again, somewhat patchily quoting Asa Gray (the 1848 Manuel of the Botany of the Northern United States) and veering, again, off:

And: “The mere logician the mere reasoner who weaves his arguments as a tree its branches in the sky—not being equally developed in the roots, is overthrown by the first wind.” Rootedness in the skittery aerial effusus itself. “Without Contraries is no progression.”

The first point of the stem preëxists in the embryo (i.e. in the rudimentary plantlet contained within the seed): it is here called the Radicle. Its elongation when the seed germinates in the soil commonly brings the budding apex to or above the surface, where the leaves which it bears or produces expand in the light and air. The growth which takes place from the opposite extremity downward, penetrating the soil and avoiding the light, forms the Root.

The plant, therefore, has a kind of polarity, and develops from the first in two opposite directions, viz. upwards to produce and continue the stem (or ascending axis), and downwards to form the root (or descending axis). The former is ordinarily or in great part aerial, the latter subterranean.