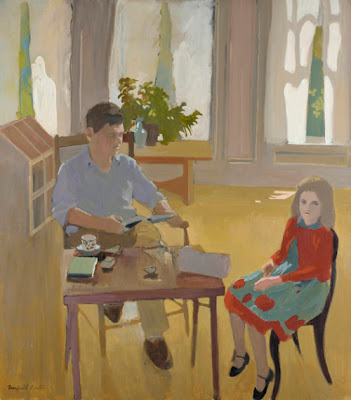 Distal itch of the weekend’s usual leisures unfeignedly forsook. “Juddering here and there in the flivver.” Long haul pre-dawn delivery vehicle. Piety of a rain-shiny road at night. Reading, between trajectory, Roberto Calasso’s Tiepolo Pink (2009), a book beginning with a sentence pregnant with all too common pertinences: “What happened with Tiepolo was the same thing that was to happen with certain imposing and mysterious ancient objects like the Shang bronzes: those aspects that resisted interpretation were considered decorative, while those too charged with meaning were labeled ornamental.” How the anxieties of the simple keep complexity in abeyance by shilling supposed verities of “style.” Thus Tiepolo is, for a period, scorned:

There were years in which English-speaking travelers visited Venice and did not see Tiepolo. The 1860 Murray’s Guide observes that the Palazzo Labia was in poor condition, but does not mention the frescoes. Ruskin ignored Tiepolo. lf he mentions him, it is only to criticize him. On seeing The Flagellation and The Crowning with Thorns in Sant’ Alvise, he decreed: Tiepolo is “virtually the beginner of Modernism: these two pictures of his are exactly like what a first-rate Parisian Academy student would do, setting himself to conceive the sentiment of Christ’s flagellation, after having read unlimited quantities of George Sand and Dumas.” A profound irony of the times: the word modernism, which throughout the twentieth century would become the emblem of all avant-garde movements, is here applied to the most hackneyed academic painting, which in its turn could allegedly be traced back to Tiepolo. Yet now that the clamor of the avant-garde has passed, saying that Tiepolo had something to do with modernism makes sense once more, at least in the sense that Baudelaire attached to the term.

An uncollected James Schuyler letter to Fairfield Porter. Schuyler is proposing logistics for travel to Maine, to join the Porters at Great Spruce Head Island. Three weeks later (1 August 1955) Porter, in a letter to Frank O’Hara writes: “Jimmy is writing a new novel, and sometimes I hear him typing and often I hear a woodpecker and think it is he . . .”) Schuyler:

Friday, July 8, 1955
Dear Fairfield,
There are two buses that go from New York to Camden. The one I shall take leaves New York at 3.15 a.m. and gets to Camden at 6.22 p.m. Is that all right, or does it stretch the definition of ‘afternoon’ too far? (in the South, they start saying evening right after lunch). The other bus leaves here at the same hour in the afternoon, and gets there—Camden—at 6.22 in the morning. For myself, I would prefer not to take it, because it would mean traveling in the dark through country I have never seen. On the other hand, if it would suit your convenience better for me to arrive in the morning, that’s a very minor point. Unless I hear otherwise from you, I look to see you a week from today, on Friday, July 15th, at 6.22 PM in Camden, Main, at the yacht club.
I’m glad you liked my translation.* Trying to translate Leopardi at times is discouraging: you can see for miles from his mountain top, but it’s also windy, cold and dizzying. Besides, as Bickersteth says, ‘no poet in the literature of the world has ever devoted more time and thought than Leopardi to . . . the principles that should govern poetic composition, or been more learned than he was in all that appertains to the art of poetry as practiced in every age and tongue,’ and I sometimes feel like an 18th century traveler coming back from Segesta with an album of water-colors.
Dante, who did not suffer from modesty, real or false, would, I imagine, have felt that his big Florentine nose had been distinctly put out of joint if he had heard an admirer say the Divine Comedy was too good to be literature. He thought it was the greatest. But I think what Sonnabend said is the hooey side of religion, as though all literature were not directly concerned with the Truth. I think that if Blake is more satisfactory than Shelley it is not because he is about the Truth in some sense that Shelley is not, but because he gave us his view of it more vividly, with greater clarity, and more concentratedly; and did so because he had a view of the Truth that was as systematic, as elaborated, as clear to himself as Dante’s Aquinian view was to him. Shelley is decidedly a smokey lamp to see by, but the light does flash out. Anyway, all that I meant to say is that I feel very je m’en fiche about the idea that there is a difference in kind between Dante and, say, Hawthorne. Dante may be a whole country, and Hawthorne a small and rocky pasture, but wild roses and hawkweed can grow in either.
I giggled a fraternal giggle at your epithets for your two new pictures, ‘a Marquet’ and a ‘compulsive elaborate detail.’ To me, it sounds like me talking about my poems. As a friend, I hope you’ll allow me the liberty to read ‘spontaneous’ in place of ‘compulsive.’
Speaking of which reminds me: Donny Windham, who was here the night before last for dinner, delighted me by spontaneously liking the painting you gave me much the most of any here. Nor was this in the context of a Fondranesque distaste for Leonid and Eugene Berman (he had already handed out several stars to the latter’s painting of the Rialto). I was especially delighted because Donny’s eye has always, so to speak, had me at his feet. It was he who first introduced to me the work of several artists that I am most fond of, such as that of Joseph Cornell and Anne Ryan, and when I look at paintings he likes and I don’t with him (when he first came to New York in his teens he was drawn into the orbit of the dread Lincoln), I am able to get something where, unaided, I would not. So, you see, I was pleased.
What a bore magazines are, sending back one’s work. After all the trouble of making them, it seems a shame to have to hawk one’s own pots. No wonder the profession of literary agent is so lucrative. Entre nous, Howard Moss is a dope and writes with his feet; though I don’t know how I dare even think it: he has my August poem right now.
John has written a new longish (one single-space page plus a little) poem which at one hasty reading seems to me very beautiful. If I can persuade him to the typewriter keys, I hope to get a copy of it, and of course will bring it with me. He is in a quandary about the title of his book, and Yale, which declines ‘Poems,’ is putting on the heat. The one he keeps coming back to is ‘Some Trees,’ which I agree is the best of those he’s thought of, though not really adequate. We’re planning to spend this evening quibbling about it.
Would you like me to sit for you while I’m there? I would like to if you would like me to.
I am alarmed by what you tell me of the first effect of Maine. Do you suppose I will be able to stay awake long enough to eat a meal?
What a long letter. Well, when I get there we won’t have to waste any time talking and can devote ourselves single-mindedly to making life a little lovelier for others.
My love to Anne and Kitty and Jerry and you.
love,
[signed] Jimmy

* Schuyler translated Leopardi’s “Il tramonto della Luna” (“The Setting of the Moon”) and “A se stesso” (“To Himself”), both pieces included in Other Flowers: Uncollected Poems (2010). “Bickersteth” is “Geoffrey Langdale Bickersteth, translator of The Poems of Giacomo Leopardi (1923). Here the reference is to “The Setting of the Moon.” In the William Corbett-edited Just the Thing: Selected Letters of James Schuyler 1951-1991, one finds in a 2 July 1955 letter to Porter:

Here is the new translation. Now that it’s had a week to cool off, I’m not so altogether pleased as I was; or rather, I see some things I would like to make better, if I can, later. Particularly the last stanza, which is written in a way that suits Italian very well, with its marvelous vocabulary of “splendid” or Miltonic words, that sound in it so natural—though I imagine Leopardi is one of the few poets who satisfactorily tamed that part of the language; to modern ears anyway (what do you think a modern ear looks like? a Juan Gris? a Soutine?) And I would like to find another word than “hides” for the beginning of the 14th line: “obscures” would translate the Italian, but I think it stretches the English usage too much; “masks” would sound right, but I don’t want a metaphoric word; so I settled for “hides,” but I think the long i sound spoils the effect of “blind” in the next line. Do you know a small, heavy, darkly-colored word that would suit? Do I sound terribly silly?

The lovely quest for “a small, heavy, darkly-colored word” recalling Sidney’s “peyzing each sillable,” and marking its “quantitie.” Schuyler’s “The Setting of the Moon”:

As, in lone night,
above silvered fields and water,
when a breeze plays,
and distant shadows make
a thousand vague aspects
and deceptive objects
among calm waves
and branches and hedges and small hills and houses,
arrived at the confine of the sky,
behind the Apennines or the Alps or into the infinite
breast of the Tyrrhenian Sea,
the moon sets; and the world grows colorless;
shadows vanish, and the dark
hides mountain and valley;
blind rests the night,
and singing, with a sad melody,
a wagon driver salutes the last ray
of the fled light
which before had led him on his way:

so is taken, so
from mortal years, goes
youth. In flight
are the shadows and shapes
of delighting illusions; and less often come
the far-off hopes
that prop a mortal nature.
Life is left
wretched, darkened. Casting his gaze before him,
in vain the confused traveler searches
the long road which he must take
for goal or reason; and finds
that the place of humankind
from him, as he from it, is truly estranged.

Too happy and gay
Our miserable lot
seemed there above, if youth,
in which each good is of a thousand pains, the fruit
should last the whole of life.
Too kind decree,
which sentences each animal to death,
unless, first, half the way were bound
over to labor,
yet harder than terrible death itself.
Worthy of immortal minds . . . 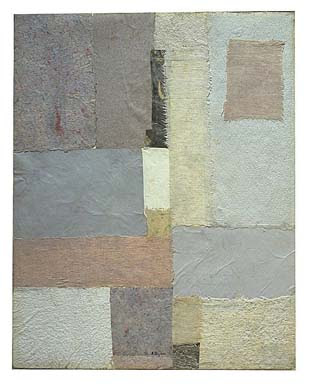 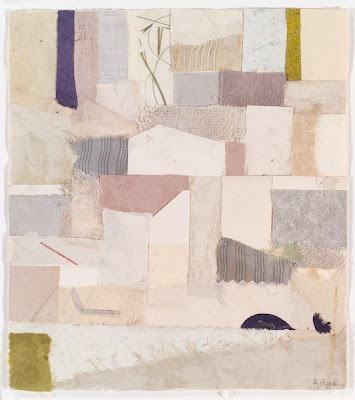