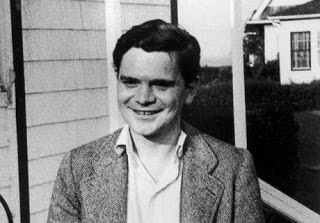 One of three short prose pieces by James Schuyler printed—with “A Memory Haunts Me” and “The Forty-First and Youngest Brother”—in the “Summer 1951” issue of Accent (wherein a note identifying contributors reads: “JAMES SCHUYLER is in Vermont working on a novel. The present publication is his first.”):

The covers were slipping away like a dream. Alfred opened his eyes. The night-light was on in the nursery and at the windows the curtains breathed gently in their sleep. He looked over the edge of the bed: one of his sister Guinevere’s white mice was tugging, in a friendly way, at the blanket. Alfred shook his head and pointed to the bed where Guinevere lay, her long hair floating on the pillow. But the mouse looked bright-eyed at Alfred and skittering backwards was gone from the room.
Leaving his empty bed, running barefoot, Alfred followed along the hall to the head of the kitchen stairs. The mouse ran down the bannister and he slid down behind it. Tic, tic, tic, tic, the tiny claws on the cold linoleum, across the kitchen and into the nameless room beyond where the cage of white mice was kept. It was dark in the cage, but Alfred could see a rummage of white and hear the whisk and slither of tails. In they went, and Alfred closed the little door: the cage filled with sunlight, green leaves sprang out of the joints of the bamboo bars, fresh morning grass rose underfoot.
Alfred sat in the center of the lawn and the mice ran in a ring around him, each one holding between its teeth the tail of the mouse ahead. One of the mice, while the others squeaked in chorus, did a kind of dance, switching its tail and trotting rhythmically back and forth. They held a contest to see who could spit the furthest, and Alfred easily won.
Then Alfred sang for them, Poor Butterfly and Some Winter’s Night, he trotted on all fours like a rooting pig, and he purred and meowed like a cat, which made them shudder and hide under the leaves. Over refreshments (tea and carrot-sticks for the mice, buttermilk and Lorna Doones for Alfred) he gave them names: Whiskers, Redeye, Longtail, Whitey and Snapperteeth.
The sunlight waned. It was getting late. Before he left Alfred kissed each mouse and nestled it against his neck. In return they gave him mouse kisses, little nips and nibbles. Then he told what Guinevere had said, that if he picked them up they would scratch him. The mice flickered their tails and their eyes snapped. Alfred said good-bye and slipped out of the cage.
He hooked the little door behind him and without looking back crossed the dawn silent kitchen and climbed the stairs. The curtains at the nursery windows were limp and blue with cold. Guinevere’s hair had drifted across her face. He crept into bed. Before the covers knew it, Alfred was fast asleep.

Oddly enough, not part of (and seemingly quite prior to) Schuyler’s 1958 novel Alfred and Guinevere. (Of the three prose pieces, Schuyler says in a 1986 interview with Carl Little: “Trevor Winkfield didn’t think they were up to snuff so he didn’t put them in The Home Book.”) In the issue of Accent, too, is Frank O’Hara’s (“FRANK O’HARA lives in Ann Arbor.”) poem “The Three-Penny Opera,” a piece Schuyler credits with triggering the abrupt and “broken” rhythms of Schuyler’s own “Salute.” And with causing him to meet O’Hara. In the Little interview:

As for O’Hara, I had those three short stories published in Accent, and when it came out, and after I had finished reading my own things over and over, I read the other things, and I was very excited by a poem called “The Three Penny Opera” by someone called Frank O’Hara. The art dealer John Bernard Myers, who ran the Tibor de Nagy Gallery, called up and said, “My dear, you’re a poet!” and so I said, “Why, thank you, John.” Then I asked him if he’d read “The Three Penny Opera,” and he said, “Frank O’Hara is right here in the room with me.”*

* A few of the Little interview’s Schuyler-made anecdotes. Of O’Hara, working at the front desk of the Museum of Modern Art (“so he could see the Matisse show . . . every day”):

One evening at the San Remo, he told me that one of his fellow museum employees, a girl, came up to him and said, “What do you think of my malocclusion?” and Frank said, “What was I supposed to say, ‘My dear, you have a smile like the sun?’”

In the spring of 1949, I was living in Auden’s house in Forio d’Ischia, which was not then developed at all into a resort; there were two small pensiones, and that was about it. But, I think, lured by the presence of Auden, Truman Capote and his friend Jack Dunphy, Tennessee Williams and Franky Merlo, and a few other disreputable American ticket-of-leave men showed up. One day, before lunch, Wystan and I went down to have an aperitif on the piazza, and Truman was there. I asked him what he’d been reading, and he said Stendhal’s The Red and the Black. And I asked, “Well, how do you like it?” and he said, “Well, I’m really quite disappointed. The transitions are so clumsy.” And all the way back to the house, Wystan, just white with rage, kept saying, “The cheek! The cheek!” [Laughter.]
At another time, Truman and Jack had gone into Naples on the ferry, and Truman, very typically of him, had bought what he could find to buy in the city of Naples: a record of Mickey Rooney singing “Treat Me Rough” and a bottle of something called Old Lady Gin, which was made in Trieste. You couldn’t get liquor like gin then in Naples—in Italy—very easily. So Truman gave a little cocktail party and served martinis. At one point, Wystan was sitting in a rocking chair. Truman, who traveled with a portable phonograph and a collection of records, put on Ethel Merman singing “Life Is Just a Bowl of Cherries,” and as soon as Ethel began to belt out the song, Wystan jumped up and cried, “Take it off, take it off! It’s the jungle!”

Too, there’s Schuyler “lying on the beach in Forio, and Wystan . . . sort of staring off towards the mainland, and he suddenly said, ‘“The dolphin-torn, the gong-tormented sea.” What rubbish!’”
Schuyler’s story (repeated in several interviews) of being “called” (by Whitman, by the landscape itself) to writing is lovely:

I used to have a tent in back of the house in the summer, and one day I was in there reading a book called Unforgotten Years by Logan Pearsall Smith, a book of recollections. In it, he describes how Walt Whitman used to come to their house in Philadelphia and stay and sing “Jump Jim Crow” in the john. And knowing Whitman and reading him gave Smith the feeling that maybe someday he, too, would be a writer. And I looked up and the whole landscape shimmered, and I said, “Yes, that’s it.”