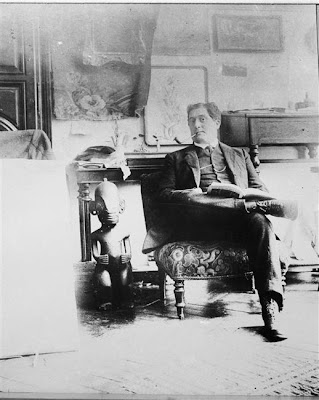 “To make my smale trippe.” It being incipient, I bluff incontinently, and go blank. Sense of some unfettered calm in the offing. A clearing, a vent, a momentary cleansing, what a city uncannily allows the walker, in its rifer zones. (O’Hara: “isn’t it odd? for in rooms full of / strangers my most tender feelings / writhe and / bear the fruit of screaming . . .”) Julien Gracq, out of The Shape of a City:

Apollinaire was the first poet to notice that a sudden clearing in the weather creates a microclimate that can cleanse and illuminate a nondescript street, create an unexpected flash of happiness just by showing how a façade of houses can capture the new day’s sun at ten o’clock in the morning . . .

And Gracq proceeds to quote “Zone”: “J’ai vu ce matin une jolie rue dont j’ai oublié le nom / Neuve et propre du soleil elle était le clairon” (“This morning I saw a pretty street whose name I have forgotten / Shining and clean it was the sun’s bugle” in Roger Shattuck’s rendering). To be suddenly heralded by the brassy (sun-colored) call of the crowded moment itself. Chaucer:

Clarioun éclaircissement. Sight accommodating (providing a lodging for) sound, sound reeving (pushing its rope through the eye of) the general dawdle and complacency. Or there’s Ronald Johnson—tongue, too, a kind of rope, language a hoarding hid:

Root in the tongue itself—the language—and pith the heart for meaning, the flower its outcome. Absorption to core of things puts forth whorl to seed. There, the thrush might sing Vivaldi (for one who had ear) and Scarlatti time lark to heart-beat.

In Bunting’s A thrush in the syringa sings . . . language is integral to vowel with consonant: a consonance, a ‘sounding together’.

Hopkins:   “on ear and ear two noises too old to end”

In travel, too: “all the wrong notes . . . right.” The “motions familiar things make” pulled out of alignment, the orbitals gone sloppy, the optic nerve pinched off and needling through in microtonal poise and diminuendo, the I flummoxed by a wonder, the slunk-down cornfield fox and the city’s cataractous dash and wobble . . . In Johnson’s memorial note “L.Z.” he writes of how words (in “our first delight”) “hopscotch sequential noise.” And quotes Zukofsky (out of “Chloride of Lime and Charcoal”):

Thanks for reading. À l’année prochaine.
Posted by John Latta at 7:35 AM