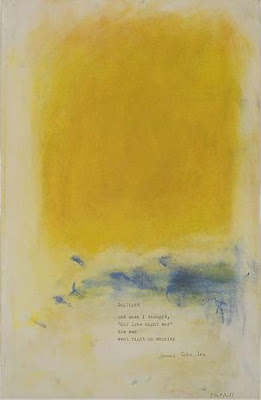 Cold, with a barely calculable skiff of snow. Out of a footnote found in The Diary of James Schuyler (1997), Schuyler, in a letter to Joe Brainard, proposing a kind of half-serious ars poetica: “There really isn’t anything to photography except point and snap (I’m not sure that’s true) . . . On the other hand, perhaps there isn’t much more to poetry than point and snap.” The fealty to sheer looking and seeing, framed—with little overreaching or complaint—by a wholly unpresumptuous human scale, happily domestic, attending to particulars. (Schuyler’s entry for August 23, 1970: “Rain runs down the window and the view shivers.”) A kind of comfortably “puttering” art, utterly serious and seemingly unconcerned with any realm beyond its own doings.

Schuyler’s catalogue of weathers. The tug of immediacy, how the day, its entry, purely itself, with few other trappings, mundane or human (though Schuyler is willing to entertain an occasional deft metaphorical flight, slightly sardonic, out and back, in order to anchor some particular in the cahoots of a relation), begins:

August 18, 1970
It’s a brisk & breezy morning, clear but pale and in the sky there are some bits and pieces of cloud which seem to have bounced up there from the bay, supernumerary waves.

August 26, 1970
On the surface of the bay the sun counts its change, quick and expert, and with dignified stealth the water pockets its tribute.

January 12, 1971
One thin cloud in the south like a scratch, and the reddish-violet of the highest elm twigs.

February 20, 1971
It’s above freezing but well below comfort and the thin off-and-on rain falls like the scratches on a movie in a third rate movie house.

Wednesday, July 12, 1989
The sky lightly smudged all over with one bright smudge, as though made by a thumb—a very large thumb, that is . . .

Tuesday, March 6, 1990
Snow slants down like summer rain pausing, now and then, and a few feathery insubstantial flakes land there briefly. The effect not of rainfall, merely of wetness, except that a few copings now draw fresh white lines on the day: a day like a dirty window.

Schuyler’s affinity to William Carlos Williams. (In a 1986 interview with Carl Little, Schuyler says of Williams: “I never read a great deal of him, but I did read him in college. New Directions at the time had something called “Poet of the Month,” and every month you got a pamphlet, and one I got that I liked very much was A Broken Span by Williams. I liked the complete freedom in his poetry, which I also had liked earlier in D. H. Lawrence . . .”*) Out of The Broken Span (1941), Williams’s “Against the Sky”:

Let me not forget at least,
after the three day rain,
beaks raised aface, the two starlings
at and near the top twig

lips chattering to the morning
sun! Praise! while the
wraithlike warblers, all but unseen
in looping flight dart from

pine to spruce, spruce to pine
southward. Southward! Where
new mating warms the wit and cold
does not strike, for respite.

Stripped of its Williamsesque frame, its rhetorical nods at a larger “import” (“Let me not forget at least” is akin to “So much depends upon”), the piece—particularly in the precision of its situating (“at and near”) elements of a momentarily caught ensemble—is nigh-Schuyleresque. “Point and snap” meaning to proceed without even Williams’s minimal rhetorical props.


* In the William Corbett-edited Just the Thing: Selected Letters of James Schuyler 1951-1991, one recalls Schuyler’s putting Williams among “the greats” in a 20 September 1959 letter to Donald Allen regarding the “background” to Allen’s New American Poetry anthology:

. . . if you want to represent the influence of readers as systematically omnivorous as Frank, John A, Prof. Koch and, me too, well: wow. Frank sometimes tends to cast the splendid shadow of his own sensibility over the past, as well as his friends, and while a brush of his wings is delightful, it is also somewhat heady. I thought you might be interested in what I remember people as actually reading.
John Wheelwright: particularly the poems in Rock and Shell.
Auden: like the common cold. Frank and Kenneth still profess; I grudgingly assent (though if Auden doesn't drop that word numinous pretty soon, I shall squawk).
For the greats: Williams, Moore, Stevens, Pound, Eliot. I doubt if any very direct connection can be found between Moore and anymore. I wanted to write like her, but her form is too evolved, personal and limiting. After a bout of syllable counting, to pick up D.H. Lawrence is delightful.
Eliot made the rules everybody wants to break.
Stevens and Williams both inspire greater freedom than the others, Stevens of the imagination, Williams of subject and style.
Pound I wonder about. Like Gertrude Stein, he is an inspiring idea. But a somewhat remote one. . . .