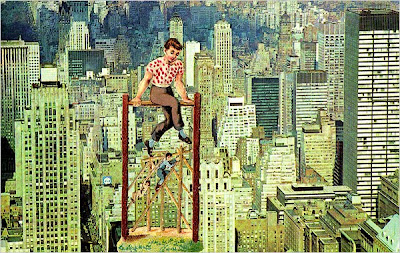 Week of some hells, week of some helloes. Cold reveilles under the stretched tent of sky. Melancholy of the paqueboats. (As Ashbery says somewhere in Flow Chart: “Nothing is required of you, yet all must render an accounting.”) I like the sort of truck that gets routinely discarded, and that ramped-up noxiousness inherent “in” (or adhering “to”) abandonment—baby strollers, brake pads, tourniquets, bleaching agents. (Is there a more euphonious name in English than Clorox?) Some of what little reading I did included lines like “The empty highway behind looked like a stretching rubber band” and a man with the sobriquet of T-Dub, a Masefield, saying with some confidence, or bravado: “Only Hoosiers kill.” (Edward Anderson’s 1937 Thieves Like Us.)

A Poem Ending with Several Unrelated Lines by Byron

Who wants to be ironic and romantic at the same time?
Sentimentality and cynicism are cousins, you see,
or at least so said George Gordon, Lord Byron, afterward.
What about sincerity and lies telling the same story.
What is to be done? (this of course, like everything, has been
already written). This reminds me of, nothing. A devilish trick,
an impossible sort of semblance. Next thing you know,
the end is near. Fragility is the same thing as strength
apparently. I have no parents, and am often wanting
to be one. In some circles this would be considered
delinquent behavior. I would to heaven that I were
so much clay. Or, Love’s a capricious power, I’ve
known it hold out through a fever caused by its own heat.

In a note Phillips quotes the opening three lines out of a fragment Byron originally scribbled down on the manuscript of Don Juan, Canto I:

I would to heaven that I were so much clay,
As I am blood, bone, marrow, passion, feeling—
Because at least the past were passed away—
And for the future—(but I write this reeling,
Having got drunk exceedingly today,
So that I seem to stand upon the ceiling)
I say—the future is a serious matter—
And so—for God’s sake—hock and soda water!

(Byron playing out the usual drunk’s agon of brute sincerity up against unthwarted rip-giddiness—“sentimentality and cynicism” exactly.) Phillips notes, too, out of Canto II:

Love’s a capricious power. I’ve known it hold
Out through a fever caused by its own heat,
But be much puzzled by a cough and cold
And find a quinsy very hard to treat . . .

The effect of Phillips’s combo of the “unrelated”: a drawing off of Byron’s indefatigable fizzing (“hock and soda water”) irony, attempting to offer up something like pure undiluted romantic sentiment. It is a move Phillips rehearses in other pieces, success coming precisely in the failure of the ruse. At the end of “Untitled (After Ignatius Loyola a Little)” he writes:

Going astray, there are seditions
& sidelong glances, curlicues. Situated?
I am moving elsewhere to me. Into
The smile or precious cul de sac, side
bar. There is no equivalence in
romance. You must be specific.
Ambivalence and contamination are
probably necessary. Things are left
behind. Discipline is another method
unlike recreation, like trouble.
Where is the sun? The relationship
of utility to authenticity is as?
Something is not well represented.

A little of Ashbery’s matter-of-factness, a little of O’Hara’s fleet dexterity and restlessness. Phillips’s own chatty insouciance, feverishly alert to its own capriciousness. One poem, “Abandoned Verisimilitude” consists wholly of a few lines by Robert Smithson, out of the 1969 piece Incidents of Mirror-Travel in the Yucatan: “Judgments and opinions in the area of art are doubtful murmurs in mental mud. Only appearances are fertile; they are gateways to the primordial. Every artist owes his existence to such mirages.” Some (rather less compelling) pieces drop into the kind of staccato funk I connect with homonymic rendering: “Too know a dum locator, mot / meditating verbies funk, trak, triple ace, a fragile / truce up lifted, pinks in a section of unibivalent / youngdoms due diadems devil, dry tanks o ale, / aloe us, halo, hallo” and so forth. Energetic and impertinent riffing. Here’s Phillips’s “Botanicals of Craziness”:

Marigold! Flower of the devil, it
can be used to keep mosquitoes and other
insects away and since I got this one
the other day, no flies! Or maybe it’s
the cooler weather. I saw some heather
at the flower man’s and didn’t recognize
it until I got home. In Hard Times,
by Charles Dickens, Miss Pross twitches
with an affliction & consequently is always
retiring into houses. A little later I am
looking at Lily, Rose, Carnation. I think
how ivy transgresses our allegories
for boundaries. Ice plant after
dinner refreshes the too spirited. Can each
flower have a trait in this our time? A useful
property pour l’amour? The mint leaf began
speaking a long time ago. Send help
to the least of us. Randomly.

John Ashbery’s Theseus (out of The Heroes):

. . . the minotaur itself was the least important part of the whole scheme. I’d always supposed the world was full of fakes, but I was foolish enough to believe that it was made interesting by the varying degrees of skill with which they covered up their lack of integrity. It never occurred to me that the greatest fake of all would make not the slightest effort to convince me of its reality . . . not a pretense! But there it was–a stupid, unambitious piece of stage machinery.

Now comes the strangest part of all. You have been in the maze several days and nights, and you are beginning to realize that you have changed several times. Not just you, either, but your whole idea of the maze and the maze itself. This is most difficult to explain, and it is the wickedest thing Daedalus ever did. The maze looks just about the same as ever—it is more as if it were being looked at by a different person . . .