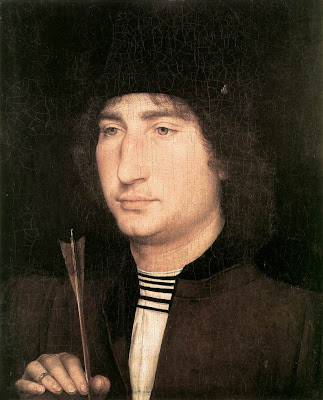 crossing and recrossing from shore to shore—

I was aghast, lost forty pounds at the gaming tables of the
Channel Islands, ’sblood I said. So I set fire to my bow, poised my arrow,
and shot amongst them. I broke seventeen ribs on one side,
and twenty-one and a half on the other; but my arrow passed clean through
without ever touching it, and the worst was I lost my arrow;

however I found it again in the hollow of a tree. I felt it; it felt
clammy. I smelt it; it smelt honey.

Now that Samurai bow & arrow, Sumi brush, teacup
& Emperor’s fan are balanced in the hand
—What about a glass of water?
Holding my cock to pee, the Atlantic gushes out.
Sitting to eat, the Sun & the Moon fill my plate.
July 8, 1981

—Etheridge Knight, out of Belly Song and Other Poems (1973)

Thou shalt not bee afraid for the terrour by night: nor for the arrow that flieth by day:
Nor for the pestilence that walketh in darknes: nor for the destruction, that wasteth at noone-day.

I went to my first movie
and the hero got his legs
cut off by a steam engine
in a freightyard, in my second

—Frank O’Hara, out of “Ode to Michael Goldberg (’s Birth and Other Births)”
(The Collected Poems of Frank O’Hara, 1971)

Shot small arrows through a blow-gun very straight at an apple a rod off, lodging them all in it. The gun was of elder with the pith out, about six feet long; the arrows, quite slender, of hard wood, with a large and dense cylindrical mass of thistle-down at what is commonly the feathered end.

We drove to St. Remy. As we approached it the hills ‘fledged’ with larches which hung in them shaft after shaft like green-feathered arrows.
Noticed also the cornfields below us laid by the rain in curls like a lion’s mane . . .

There is little doubt that Giotto himself dreamed that an angel lifted up a portion of his house, if not the whole rest of the town, judging from the tilted tower in the distance. And that he slept from that time in a perfectly curved condition, pointing then like the arrow that once launched circles to kill you, plunging through your back in the years to come. Figure one, a use for the mirror. I sometimes feel that poems stay like tobacco juice in the universe, of no use to men but of the highest importance to all the rest. Tuba with sidecar. The man’s firing mechanism jams and he seems to come apart before the eyes of the henchmen.

Names who are strangers out of bounds of the bound margin: I thought one way to write about a loved author would be to follow what trails he follows through words of others: what if these penciled single double and triple scorings arrows short phrases angry outbursts crosses cryptic ciphers sudden enthusiasms mysterious erasures have come to find you too, here again, now.

—Susan Howe, out of “Melville’s Marginalia” (The Nonconformist's Memorial, 1993)

as wise as an (earwig, owl, eel).
as sober as a (knight, minstrel, judge).
as crafty as a (fox, cuckoo, kitten).
as bright as a (button, bicycle, bucket).
as smooth as (sandpaper, velvet, wood).
as slippery as an (accident, eel, engine).
as straight as an (angle, angel, arrow).

Is this the creature of whom it was once so triumphantly said—“Canst thou fill his skin with barbed irons? or his head with fish-spears? The sword of him that layeth at him cannot hold, the spear, the dart, nor the habergeon: he esteemeth iron as straw; the arrow cannot make him flee; darts are counted as stubble; he laugheth at the shaking of a spear!” This the creature? this he? Oh! that unfulfilments should follow the prophets.

But shoot! shoot straight,
they say. The arrow flies! the barb
is driven home and . . . strength
thrust upon weakness, the convulsive ecstasy

achieved, in the moment of impact
we are left deafened and blinded, blind to
the sun and moon, the brilliant
moonlight leaves, to fish and fowl:

the
bird in white above the swimming bird
and from the depths of the wood
the song that is the bird, unseen.

—William Carlos Williams, out of “To All Gentleness” (The Wedge, 1944)

A woodpecker
Drums and echoes
Across the still meadow

Manzanita             the tips in fruit,
Clusters of hard green berries
The longer you look
The bigger they seem,

The word, he said,
drawn like an arrow,
so fits
into the body of the bird it hits.

For you I would build a whole new universe but you obviously
find it cheaper to rent one. Eurydice did too. She went back
to hell unsure of what kind of other house Orpheus would
build. “I call it death-in-life and life-in-death.” Shot
In the back by an arrow, President Kennedy seemed to stiffen
for a moment before he assumed his place in history. Eros
Do that.
I gave you my imaginary hand and you give me your imaginary
hand and we walk together (in imagination) over the earthly
ground.

—Jack Spicer, out of “Love Poems”
(My Vocabulary Did This to Me: The Collected Poetry of Jack Spicer, 2008)

Spears and assemblies: black drums thrusting on—
O yelling battlements,—I, too, was liege
To rainbows currying each pulsant bone:
Surpassed the circumstance, danced out the siege!

And buzzard-circleted, screamed from the stake;
I could not pick the arrows from my side.

On what a river; wide twinkling like a chopped sea under some
of the finest shipping in the

world: the square-rigged four-master, the liner, the battleship, like the two-
thirds submerged section of an iceberg; the tug strong moving thing,
dipping and pushing, the bell striking as it comes; the steam yacht, lying
like a new made arrow on the

Everybody brought you souvenirs in those days, steel arrows that pierced horses’ heads, pieces of shell, ink-wells made out of pieces of shell, helmets, some one even offered us a piece of a Zeppelin or an aeroplane, I forget which, but we declined. It was a strange winter and nothing and everything happened.

—Gertrude Stein, out of The Autobiography of Alice B. Toklas (1933)

The broad-leaved Arrow-head
grows vivid and strong
in my book, says: underneath
the surface of the stream the leaves
are narrow, long.
I don’t investigate,
mark the page . . . I suppose
if I sat down beside a frost
and had no printed sign
I’d be lost. Well, up
from lying double in a book,
go long like a tree
and broad as the library.

This month winter ruleth.
The sun is in archer’s shoulder
in crow’s head at sunrise
Ice thickens. Earth cracks. And the tigers now move to mating.
Cut trees at solstice, and arrow shafts of bamboo.
Third month, wild geese go north,
magpie starts building,
Pheasant lifteth his voice to the Spirit of Mountains
The fishing season is open,
rivers and lakes frozen deep
Put now ice in your ice-house,
the great concert of winds
Call things by the names.

—Charles Olson, out of “The Encounter”
(The Collected Poems of Charles Olson: Excluding the Maximus Poems, 1987)
Posted by John Latta at 9:39 AM