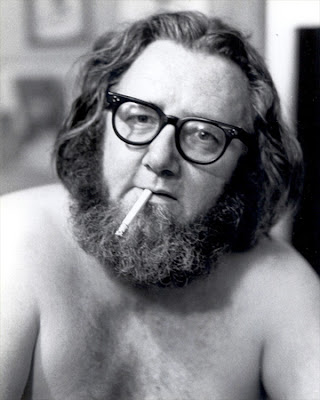 Balmy, and damp. Morning’s own salve to my sleeplessness. “What”—Ted Berrigan writes to Ron Padgett (17 September 1964)—“is a ‘boke’?” Reading the Berrigan / Padgett / Brainard collaboratory Bean Spasms (Granary Books, 2012)—“originally published by Kulchur Press in 1967.” Out of “Boils”:

How the prevalence of stumpy monosyllabics and neologic flak (“tropper” “flett,” “fonk,” “plance”) recalls the experiments of the Language boys, in particular, the endlessly discussed line “Instead of ant wort I saw brat guts.” Bob Perelman’s history (out of the 1996 The Marginalization of Poetry: Language Writing and Literary History):

“Instead of ant wort I saw brat guts.” This line is the epigraph to In the American Tree. In a canonical literary history, one addressed to a judging reader, such a phrase would make quite a limited aesthetic object. But as I am interested in non-canonical or anti-canonical sets of literary narratives where literary history is created by writers, I’ll give the circumstances of the birth of this line.
Kit Robinson, Steve Benson and I began a writing project almost as soon as we met in San Francisco in 1976. One of us would read from whatever books were handy and two of us would type. These roles would rotate; occasionally, there would be two readers reading simultaneously to one typist. The reader would switch books whenever he felt like it, and jump around within whatever book was open at the time. Truman Capote’s slam at Kerouac’s work—that this was typing, not writing—would have been even truer here, though none of us could type as fast as Kerouac, who apparently was a terrific typist, an ability which undoubtedly helped give his writing its enviable fluidity.
This was not automatic writing, automatic listening would be more like it. There was no question of keeping up with the stream of spoken words; one could attempt to attend to them or not. If I felt no spark of imagination I would type at or toward the next batch of them I heard . . .
I don’t want to make claims for this process as representative of language writing; no published work that I know of has been written using this method. But I want the extremity of this process, where reading and writing, hearing and producing words were so jammed together, to emblematize an important collaborative element of the beginnings of the language movement.

The (subsequent) intensity of the earnestness (note that “writing project”) for what must’ve been mere boyish writerly hijinks is insuperable. Note, too, the anxiety inherent in the repeated nods toward precedent (“Capote’s slam at Kerouac’s work,” “automatic writing,” “no published work that I know of”): betraying an ardor for the sort of literary historical accounting that marks the grasping academic. Compare Ted Berrigan’s “Notes” to the writings he did with Padgett:

A lot of the longer poems we wrote while waiting for our wives to make us dinner. Usually it was in Ron’s apartment on West 88th, a very busy and exciting place, and while we were writing friends were dropping in and leaving, the baby (mine) was scooting around doing hideous things such as breaking up Joe’s collages and our wives, Sandy and Pat, were having unbelievable dialogues about dinner, much of which went straight into the poems. BOILS was written in this setting, as were THE PASTOR, KODAK, and others. There was, naturally, no thought of having thoughts, we usually wrote as fast as we could; in fact sometimes there were two typewriters and we worked on two poems simultaneously. Sometimes friends who came by would write a few lines: Peter Orlovsky & Gerry Malanga wrote parts of BOILS.
Most of the time we made up rules but sometimes we didn’t. In BOILS, as I remember, the idea was to go as long as you wanted, and to make uniform length stanzas, but above all never to stop typing. Part of the time Ron read to me from different books while I wrote, so that I wouldn’t run out of things to say, and I returned the favor. I think the phonograph was playing too, or the radio.

Berrigan ends (after noting a “fill-in-the-blanks operation, in which one of us would type up a paragraph or more from some source, leaving out words and substituting blanks for the other to fill in”—and how there exist “two or three sets of works like this, all with the same basic ‘plot,’ but with different ‘details,’ filled in by us, and by Aram Saroyan, Bill Burroughs, Dick Gallup, Tom Veitch, Barbara Guest, Kenward Elmslie, Edwin Denby, Tony Towle, Kenneth Koch, Johnny Stanton, etc.”—detritus, dispersed, of the “era,” its “working papers,” its toys . . .):

Most of the other works can be figured out as to how they were done. There are no tricks. It was New York City and friends, and most of our friends were writers or painters, and when we got together (the writers not being able to afford to “Cedar Bar”) we wrote. That is, we collaborated. The poets wrote at each other on the page, and wrote on works of the painters, and the painters, (Joe Brainard and George Schneeman to name two,) painted out the words leaving space for more.
It wasn’t the new thing, we didn’t even invent the idea, and we didn’t think we were being revolutionary. It was just what was happening and fact, still is.

That “echoing without intent” O’Hara’s “[Statement for The New American Poetry]” (“What is happening to me, allowing for lies and exaggerations which I try to avoid, goes into my poems. I don’t think my experiences are clarified or made beautiful for myself or anyone else, they are just there in whatever form I can find them . . .”) One senses Berrigan’s rare unpretentiousness and heart.
Posted by John Latta at 6:45 AM