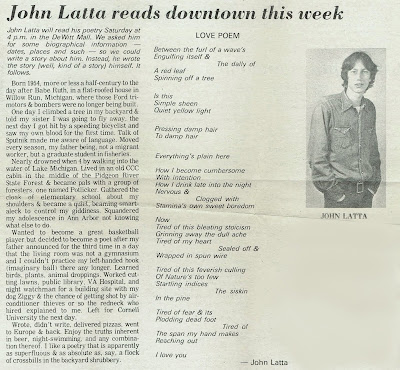 Clipping out of The Ithaca Journal, 14 February 1976

Because, incorrigibly, I am, au fond, an unabashed Fitzgeraldean romantic egotist (comme tout le monde), a sentimental sop for, particularly, my own skinny former self (here, aetat. 22).

Because my brother found the clipping (out of The Ithaca Journal, dated 14 February 1976, under the quaint and erstwhile rubric “The Poetry Corner”) amongst some of my father’s papers and sent it to me (along with an approbatory “Hah!”).

Because I see herein my incipient poetics, inchoate and antithetical (“superfluous and absolute as a flock of crossbills in the backyard shrubbery”—a thing of pure anticipatory fancy, a whole cloth pitch gainsaid by no tangible).

Because I suspect I would, in a pinch, hew precisely again to such a nonce-explanatory adherence (inserting “twenty or so evening grosbeaks” for “crossbills” or “an osprey raking a largemouth up off pewter-colored chop of Lake Winnewanna” or some like dummy for the whole phenomenal smear, a metaphorical gasp) and, perhaps, have.

Because I’d like to correct “Lake Michigan” to read “Burt Lake” or “Mullet Lake,” one or the other of two sizeable lakes of Cheboygan County, for though the story’d remain defiantly “in flux,” to be one lake nearer the truth is a strange and tolerable wonder.

Because I sheepishly recall my justificatory rap concerning “Love Poem”—how I’d “dared myself” to end with such colossal sententiousness, inert commonplace, a throwaway, a jitney.

Because the reading itself occurred downtown by dint and patronage of the Ithaca Community Poets, a downtown cohort (mostly) of those unaffiliated with various hill-ensconced university types (though I do recall a counter-movement, later, against the stuffiness of that “formation” in a brief flurry of alcohol-fueled readings at the “uptown” Cabbagetown Café, where I occasionally worked the Sunday brunch rush and routinely lobbied to change the standard “Hearty Vegetable” soup-moniker to “Inevitable Vegetable” and was heartily ignored . . .)

Because a certain style of the biographical guff that pervaded “the era” (somewhere between Philip Levine’s perennial “After a succession of stupid jobs he left the city for good” and Peter Orlovsky’s “Did weight lifting with bus stops . . . Enjoy mopping floors, cleaning up cat vommit”) is alarmingly evident herein . . .
Posted by John Latta at 5:32 AM