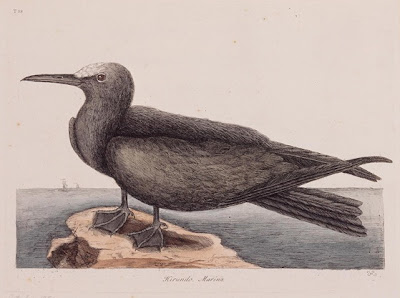 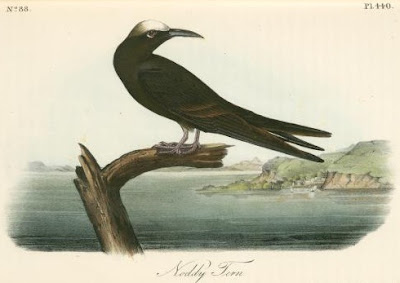 Walking, I recite the hard
explosive names of birds:
egret, killdeer, bittern, tern.
Dull in the wind and early morning light,
the striped shadows of the cattails
twitch like nerves.

I was not only in need of food, but was hungry for headlands, coves, the sight of a sea hare, the lantern fish, plateaus. I had never seen a widgeon, tern or a booby, but the names helped to fill my empty spirit and belly. People can be content with little; the islanders whom Columbus found at the Antilles were satisfied with a calabash of water and brown earth crumbled into small pieces kneaded with leaves.
Western man wants everything that is useless. Why not, I speculated, go from door to door selling hiccoughs, yawns, belches, dysentery, colic, impostumes, virility, infidelity, and granulated eyelids? I considered other wares that could be sold: a cask of Reason seasoned with muscadine, hundreds of sour syllogisms, a pleurisy of unkindness, rashers of apathy . . .

We wanted something: a nude instance
of gaga, a tern in a sunken hammock,
anecdotes that end with angry pigeons,
pinochle won. Should think profound—

profound was the wrong word.

Like a
solitary aimless common tern
I am going hence-
forth to be hero
of all my doings,
kik-kik-kik-ing, with
its bill point’d straight
down into the cloud-
catching pond full of
knife-shaped pike and
the detritus of heaven.

how
can you be otherwise than
a metaphor
than as fabulous as to move
except as your own fingers duplicate
a long-nailed god, your eye
to be so trained by night
it goes as slow as weights
(as slow as Shiva's turning toe), as fast—how run
except as he did (as tern flies), how gauge yourself
except as also Cenozoic beast

—Charles Olson, out of “Concerning Exaggeration, or How, Properly, to Heap Up”
(The Collected Poems of Charles Olson: Excluding the Maximus Poems, 1987)

I would begin at the beginning, reading straight to the end or skipping only a few passages, and sometimes I would begin at the end, reading straight to the beginning, working from redemption backward, perhaps skipping the same passages, and she would never seem to notice, perhaps because her ears were filled with nothing but the long, receding tides, the wash of the waves upon the shore, the winds and their antiphon reminding me of all who had died. Barn swallows darted out over the long, looping waters. Sometimes there was a strange white bird, an Arctic tern stopping upon the rocks or a long-winged white heron drifting through the clouds. The snow-white seagulls honked, descending through the late or early darkness as if they knew no time of man . . .

The wreck of the Tiger, the early pirate, the blood-clam’s
ark, the tern’s acute eye, all buried mathematical
instruments, castaways, pelicans, drowned five-
strand pearl necklaces, hopes of livelihood,
hopes of grace,
walls of houses, sepia sea-fences, the writhen octopus and
those tall masts and sails,
marked hulls of ships and last month’s plane, dipping his salute
to the stone wing of dream,
turbulence, Diamond Shoals, the dark young living people:
“Sing one more song and you are under arrest.”
“Sing another song.”

. . . and a head half-turned to watch
a reeling tern, a sleeve,
a garment’s fold, no word, no whisper,

nor glance even . . . or was it a gull
she watched, a heron or raven
or plover? the eclipsed pillar

with the shadow showing darker,
for the white gleam above,
of sun-lit marble,

a certain sheen of cloth,
a certain ankle,
a strap over a shoulder?

remember these small reliques,
as on a beach, you search
for a pearl, a bead,

a comb, a cup, a bowl
half-filled with sand,
after a wreck.

Some consider tern to be related to stearn, stern, which occurs in Old English as a bird-name, and, in the form starn, is a name in East Anglia of the Common and the Black Tern; it is mentioned by W. Turner Avium præcipuarum historia, 1544, as ‘nostrati lingua sterna appellata’, whence Linnæus took Sterna as a generic name.

—Out of the Oxford English Dictionary

Storms, on the stone-cliffs beaten, fell on the stern
In icy feathers . . .

He who generalizes at random might perhaps be induced to compare the Fishing Hawk to nothing else than a very large and clumsy Tern, for like most birds of that group, it is known to range in a desultory manner over the waters of our bays and estuaries, and along the shores of the Atlantic and Pacific Oceans. It poises itself awhile on spying its prey just beneath the surface of the water, glides or plunges headlong upon it, and thus secures it at once, or experiences the same disappointment that Terns themselves do on many occasions. It is true, however, that the Fishing Hawk does not, Tern-like, secure its finny prey with its bill; but what of that, if it plunges into the deep and seizes its quarry there?

Three shotgun shots as it gets dark;
two birds.
“how come three shots?”
“one went down on the water
and started to swim.
I didn’t want another thing like that duck.”

the bill curved in, and the long neck limp—
a grandmother plumage of cinnamon and brown.
the beak not so long—bars on the head;
by the eye.
Hudsonian Curlew

and those tern most likely
“Royal Tern”
with forked tail,
that heavy orange bill.

—Ernest Hemingway, out of a letter to Archibald MacLeish (14 March 1931)

We are cruising, at walking speed, through a sanctuary: bird life is affronted. Herons, with their prehistoric bloodline, are disdainful; badly articulated umbrella-forms wishing us hence. Arctic terns divebomb the pilot, regroup, come again as a second wave.

—Iain Sinclair, out of Edge of the Orison: In the Traces of John Clare’s
“Journey out of Essex” (2005)

and with this
I reclaim myself,

Recover what is
in the conch,
the gull and tern,
the long coastal sky,

Draw back from horizons,
from back breeze
over marsh grass.

Come up from sand and briers,
Down from wing of curlew,

Out of mullet.
clam shell, and
frond of palmetto.

My parts fly back to my limbs.

Clack your beaks you cormorants and kittiwakes,
North on those rock-croppings finger-jutted into the rough Pacific surge;
You migratory terns and pipers who leave but the temporal clawtrack
written on sandbars there of your presence;
Grebes and pelicans; you comber-picking scoters and you shorelong gulls;
All you keepers of the coastline north of here to the Mendocino beaches;
All you beyond upon the cliff-face thwarting the surf at Hecate Head;
Hovering the under-surge where the cold Columbia grapples at the bar;
North yet to the Sound, whose islands float like a sown flurry of chips
upon the sea;
Break wide your harsh and salt-encrusted beaks unmade for song
And say a praise up to the Lord.

In alchemy, the wren who vexed Thoth.
In admixture, the summer terns with segmented wings & the patterned earth.
In sunlight, the ensouling over the forest.
In doctrine, metempsychosis.
In practice, the transmigratory elaborations, the little autochthonomous soul leavings.
In evenings, the firefly’s transmigratory dynamo,
the firefly’s renewed lutrescent fuse,
that little phosphorescent flare of transanimation.
In prayer, the little struggles, the pressing awareness of flaws.
In the world, ongoing wars,
the sadness of foolishness.
In actuality, grace. Life from life—the vital force burst through the body’s feathers.
In flight, birds. Arrowing off the earth.

—Peter O’Leary, out of The Phosphorescence of Thought (2012)

. . . spent a few moments trying in vain to estimate the width of the Mississippi and watching a family of terns maneuver offshore. I found a pair of catfishermen setting up on the breakwater, fine-tuning their sinkers and their big radio.

—Merrill Gilfillan, out of “The Mississippi to Hannibal” (Rivers and Birds, 2003)

There were now fourteen notches on the loom of the Skyeman’s oar:—So many days since we had pushed from the fore-chains of the Arcturion. But as yet, no floating bough, no tern, noddy, nor reef-bird, to denote our proximity to land. In that long calm, whither might not the currents have swept us?

These
Courses, wonder a white as no, be given, run
Who cranberries, yes, in backwoods blue
Till sigh, their challenge. Go, slim blockade,
Oats-dairy! We’re not all back
Engining black, engines London, kiss, night,
Endow. Forthright is the sheeplike elbow
And the bins of a tern’s resolution!

joy in their male coloring is yours
and the neck reach

the colonial language
of tern sibilancy

. . . today Sputnik over London says too-too-too
Over Paris ditto
Over Washington hah! hah! hah!
And Polaris says Whoobsk:
Dear whilom friend champing with the bad teeth of Rudaki
His laugh for the terns and the gulls fogdog
On The Hoe, Plymouth, England mimicked
The seadog with the two-year old—
‘Tommy, what does Mr. Brown say?’
‘Mr. Brown he says, Boogar.’
‘And Tommy what does Mr. Ferris say?’
‘Mr. Ferris he says, Fook.’

The spinning air lifts up your curls,
Jeune homme. The burning sea tinders
Your eyes and flakes off terns midair.
Could a moldy ave and jeremiad,
A midrash honey from this pulvered strength
Stutter of ancient violence, you and I
Need not struggle with tales of Poppadeius.
To say thalatta, the sea, said the Greeks,
Is to say mother. Poppadeius was a bastard.

Zebra finches like their males with red legs and females with black legs, and are repelled by males with green legs or females with blue legs. A female Australian brush turkey is attracted to the male who builds her the largest nest, and is quite demanding: the nests can run to two tons. An Archbold bowerbird is especially smitten by a male capable of procuring rare King of Saxony bird of paradise blue feathers to feather the bower. A female tern prefers the male who presents her with the most fish; an emphid fly takes the one who produces the prettiest hollow silk balloons.