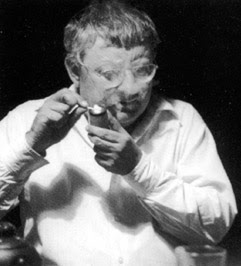 Blustery with a hint of rain. A skunk, largely white, rooting out grubs. Dog entirely indifferent. Disjecta out of the idiot kingdom of half-sleep trailing dropsically along into day. To tether one’s buoyancy to water. Marianne Moore, talking about Pound’s phanopoeia, recalls, with the seeming immediacy of the perennially word-solvent, “the statement by Dante that Beatrice walked above herself—come una crana.” And, succeeding:

Confucius says the fish moves on winglike foot; and Prior, in his life of Edmund Burke, says Burke “had a peculiarity in his gait that made him look as if he had two left legs.” Affirming Coleridge’s statement that “Our admiration of a great poet is for a continuous undercurrent of feeling everywhere present, but seldom anywhere a separate excitement,” Mr. Pound says Dante “has gone living through Hell and the words of his lament sob as branches beaten by the wind.”

An extraordinary charge unleashed, a potent cocktail of quotables. Moore’s next sentence, innocence feigned for effect, is: “What is poetry?” I think of the story of Coleridge who, under the feigned name of “Silas Tomkyn Comberbache,” enlisted in a cavalry regiment in order to cure himself of a “violent antipathy to soldiers and horses.” I think, too, of the story of Coleridge going down the Strand pretending to be Leander swimming across the Hellespont. One thrust-out hand inadvertently connecting “with a gentleman’s pocket” he is roundly accused of being a pickpocket. I think of William Carlos Williams’s note to “Howl”: “Hold back the edges of your gowns, Ladies, we are going through hell” and “Poets are damned but they are not blind, they see with the eyes of the angels.”

Pickpocketry (out of “The Notch at the Flume of the Gorge,” in Bernadette Mayer’s The Desires of Mothers to Please Others in Letters):

A good course in American writing study would be Hawthorne, Whitman, Kerouac and Stein, see how much each did for the sentence and the line, what queer attitudes to sex they all had, Hawthorne the stiff-backed fantasizing Puritan who had such sensuous lips, who walked and had a neurasthenic wife, two religious daughters and one dutiful son, who said after his third child was born, no we will certainly have no more of that but he didn’t say how; Whitman the man autoerotic who was nearly perfect, the wanderer, the fucking mountain, Kerouac the crazed, a retroactive family man who wanted work; and Stein the expatriate lesbian who loved her country and a big fat woman Donald Sutherland the critic said you trembled with sexiness when you shook her hand, another talker, food lover, I wonder what Hawthorne’s and Whitman’s voices sounded like, you can imagine, family life. I like these guys better than those half-English dolts Joyce and Pound who made such a tight-assed mystery of their love and the horrible head-heart problem, I shouldn’t say that, my love is unsettling. I hope I’m like Whitman, exempt. Oh and I forgot William Carlos Williams warning us about all the bastards, he and Hawthorne and Stein had devoted wives, in fact everybody has a female but Whitman so I can think of him as a woman like me, and Emily Dickinson who had it with every. Thing, what is a woman’s experiment with memory, tell me.

A kind of anti-Moorish gush. “Continuous undercurrent.” (I think of O’Hara’s line: “I want to be at least as alive as the vulgar.”) Against the scintillant, hard blaze of particulars poised and impinging one against another, each a “separate excitement.” (Moore ends the Pound essay— “‘Teach, Stir the Mind, Afford Enjoyment’”—by quoting Pound’s “Salvationists”: “Come, my songs, let us speak of perfection— / We shall get ourselves rather disliked.” And concluding: “We shall get ourselves disliked and very much liked, because the zest for perfection communicates its excitement to others.”) Noel Black, in a piece called “Remembrance of the Amnesiac” in the newish and terrific Uselysses (Ugly Duckling, 2011) puts it succinctly, borrowing off / mashing up Proust and Sam Taylor’s The Amnesiac*:

The missing part of his heart still only a fragment he wrote down in his
black notebook at the border of remembrance.

weather in the memory—the autumn grayness, stale vestiges of a limbo
between chapters in other words, dazzling black box . . .

Out of Guy Debord’s Panegyric (Verso, 2004), skeptically perused in the dullard hours of night:

I will have to make rather extensive use of quotations. Never, I believe, to lend authority to a particular argument, but only to show fully of what stuff this adventure and I are made. Quotations are useful in periods of ignorance or obscurantist beliefs. Allusions, without quotation marks, to other texts that one knows to be very famous, as in classical Chinese poetry, Shakespeare, or Lautréamont, should be reserved for times richer in minds capable of recognizing the original phrase and the distance its new application has introduced. Today, when irony itself is not always understood, there is the risk of the phrase being confidently attributed to oneself and, moreover, being hastily and incorrectly reproduced. The antique ponderousness of exact quotations will be compensated for, I hope, by the quality of the selections . . .
Those who wish to write quickly a piece about nothing that no one will read through even once, whether in a newspaper or a book, confidently extol the style of the spoken language, because they find it much easier, more modern, and direct. They themselves do not know how to speak. Neither do their readers, the language actually spoken under modern conditions of life being socially reduced to its indirect representation of itself, as endorsed by the media, and comprising some six or eight constantly repeated turns of phrase and fewer than two hundred terms, most of them neologisms, with a turnover of a third of them every six months. All this favours a certain hasty solidarity. In contrast, I for my part am going to write without affectation or fatigue, as the most natural and easiest thing in the world, the language I have learned and, in most circumstances, spoken. It’s not up to me to change it. The Gypsies rightly contend that one is never obliged to speak the truth except in one’s own language; in the enemy’s language the lie must reign.

And, because I seem bound to jig the firmament of how to write, proposing nothing and concluding less, in a salient (silent) wash of un-recapturable memory-tithings and -decimates, the sort of thing the word “mimsy” was just made for—, there’s Edmund White writing in 1979 “On James Merrill” (out of The Burning Library):

He believes that words do convey messages, that a line is a mix-and-match ensemble pieced together out of reliable signifiers. Other poets, perhaps fed up with the aural racket of our country, the booming emission of television, the press and advertising, have come to distrust (perhaps despise) discursive language. They prefer to hover like entranced oracles over the intoxicating fumes of the unconscious and to jot down its spare, suggestive but elusive utterances, to trace in the dust the faint outlines of their nether selves. Still others, more advanced, seem to be more interested in the syntax of thought than in the content of a thought. The speaker in John Ashbery’s work, for instance, tells us nothing paraphrasable. His is not a sociable voice, he’s at home neither with language—nor with us. Rather, Ashbery manipulates, in always less predictable ways, our verbal expectations—which he invariably frustrates. After I have finished reading a poem by Ashbery (who I intensely admire), I have the feeling that Dr. Penfield has run an electrode over various cells of the exposed cortex and that flickers of old memories, submerged sights and sounds, have been lit up in odd combinations.

* See, say, in the Lydia Davis translation of Swann’s Way, the lines: “they in their horror of vulgarity had made such a fine art of concealing a personal allusion beneath ingenious circumlocutions that it often went unnoticed even by the person to whom it was addressed.” And, in the Taylor book:

The ‘missing’ song. In any case, the bridge between verse and chorus was now echoing in his memory. Four chords and seven words:

It was still only a fragment, but he felt so relieved.