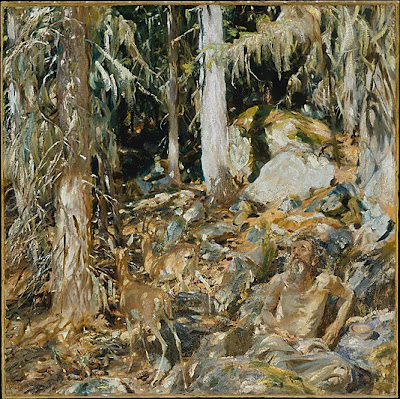 At any time the word hermit was enough to transport him, like the witch’s broomstick, to the solitary hut, which was delightfully surrounded by shady solemn groves, mossy rocks, crystal streams, and gardens of radishes. While the fancy lasted, he forgot the most obvious of all facts, that man is not made for habitual solitude, nor can endure it without misery, except when turned into the superstitious ascetic;—questionable whether even then.

—John Foster, out of “On the Application of the Epithet Romantic, Letter II”
(Essays, in a Series of Letters, 1804)

It’s like practicing a scale: at once different and never the same.
Ask not why we do these things. Ask why we find them meaningful.
Ask the cuckoo transfixed in mid-flight
between the pagoda and the hermit’s rococo cave. He may tell you.

We look at imitation askance; but like the shell which the hermit-crab selects for itself, it has value—the avowed humility, and the protection.

What I need for my writing is seclusion, not “like a hermit,” that would not be enough, but like the dead. Writing, in this sense, is a sleep deeper than that of death, and just as one would not and cannot tear the dead from their graves, so I must not and cannot be torn from my desk at night.

So the young man went inland and became a qivigtoq, a hermit, “a ghost who may never return home.” It was said that qivigtoqs become supernaturally strong. They learn the speech of animals, and they are nalussaertok, aware of everything.

It is unnatural to think of men who have grown venerable in asceticism and meditation as plump babies. While you are free to challenge the idea that the poets of antiquity in the East were not the same rollicking characters as the poets of antiquity in the West, I am no less free to reply that those in the East were so often lonely horsemen, hermits beside water falls, passengers on moonlit roads and men whose hearts were hollow, while those in the West were flirtatious young men that stood outside of the post office and picked up girls, sailors, tourists, and professors at Fribourg. Enfin, I refuse to take seriously the idea that living in a bamboo grove increases one’s heft.

. . . continuous, the sea-thrust
is powerless against coral,

bone, stone, marble
hewn from within by that craftsman,

is master-mason planning
the stone marvel:

yet that flabby, amorphous hermit
within, like the planet

senses the finite,
it limits its orbit

of being, its house,
temple, fane, shrine:

it unlocks the portals
at stated intervals:

prompted by hunger,
it opens to the tide-flow:

Loneliness is necessary for pure poetry. When someone intrudes into the poet’s life (and any sudden personal contact, whether in the bed or in the heart, is an intrusion) he loses his balance for a moment, slips into being who he is, uses his poetry as one would use money or sympathy. The person who writes the poetry emerges, tentatively, like a hermit crab from a conch shell. The poet, for that instant, ceases to be a dead man.

The empiricist has written: bipartite divisions are false. Truth / not truth a non-truth. The enslaved are the worst custodians of liberty though they are good examples to the free. Without them you are nothing. And you are not free but in name. The examiner remains steadfast, confounded by squandered energy. “I have but one lifetime and a stone,” he says with a wearied sigh. He is like the hermit crab on the shore: begging, defenseless, and without greater shelter than the evanescent translucence of a temporal shell.

The Chinese epithet ‘mountain man’ . . . immediately reminded the initiated reader of that long line of poets who left the world, became hermits and took as their sobriquet some variation on these words. Not a single word in the Chinese poetic vocabulary is innocent, no more so than the phrase ‘A lady asked me’, or the epithet ‘gray-eyed’, is innocent in the West.

Shaven priests are supposed to be more temporal, bearded ones more evangelical: the wicked Frolo was beardless, the good Père de Foucauld bearded. Behind a beard, one belongs a little less to one’s bishop, to the hierarchy, to the Church as a political force; one looks freer, a bit of an independent, more primitive in short, benefiting from the prestige of the first hermits, enjoying the blunt candour of the founders of monastic life, the depositories of the spirit against the letter: wearing a beard means exploring in the same spirit the slums, the land of the early Britons or Nyasaland.

—Roland Barthes, out of “The Iconography of the Abbé Pierre” (Mythologies, 1957)

. . . I see all this and wonder at the men and women who can mow the dandelions down and all the bluets with them, for the sake of an idea of an idea of unadulterated green and grass that is short and not conducive to bugs and mosquitoes, and we had a bee in today, I still can’t feel as strongly about it as I do when something tells me I’m about to see the year’s first big snow. As if for the sake of alertness maybe, I can steel myself then and let fall in a minute everything I’ve stored or gotten like a hermit or a squirrel from the sun and the green, not that I ever understand what I’ll do after that, when the gray qualities of November really begin to take over nor even to speak of the tediousness of early February, so much more inspiring to me than any part of June.

—Bernadette Mayer, out of “Primitive Road” (Proper Name and Other Stories, 1996)

I can think sitting still as well as standing up. And what is knowledge? What are our learned men save the descendants of witches and hermits who crouched in caves and in woods brewing herbs, interrogating shrew-mice and writing down the language of the stars?

. . . seldom was there a day without drizzle and fog and spindrift floating like the wraith of a star, slapping her knees, slapping her hands, almost tumbling as the wet-washed winds whirled against her broad skirts and long, thin legs, wading through the thin line of leaden-colored and foaming surf which cast its twilight on her face, her water-colored eyes peering above her misted and rimless eye-glasses, her cheeks spotted with hectic rose as the grey light was streaked with rose, she would stop to kick old driftwood back into the water, to poke at a dead lobster or broken hermit shell or mop of livid sea-weed, and sometimes she would fight to assert her will when the waves returned it, when the waves washed up the same sad thing again. Or if the same thing came not again, it seemed to her the same. Doubtless one sea shell was like another . . .

Any characteristic act—whether it is a sailor’s sailing or a hermit’s withdrawal or a writer’s writing—is an act of reciprocal invocation. It activates a world in which the act makes sense. It invents.

As I looked up the clouds assumed, as I assumed, faces of hermits. The pine boughs looked satisfied washing in the waters. The top trees shrouded in gray fog looked content. The jiggling sunshine leaves of Northwest breeze seemed bred to rejoice. The upper snows on the horizon, the trackless, seemed cradled and warm. Everything was everlastingly loose and responsive, it was all everywhere beyond the truth, beyond emptyspace blue.

“. . .Thou knowest not how came ye, hence callest thyself unbegotten; certainly knowest not thy beginning, hence callest thyself unbegun. I know that of me, which thou knowest not of thyself, oh, thou omnipotent. There is some unsuffusing thing beyond thee, thou clear spirit, to whom all thy eternity is but time, all thy creativeness mechanical. Through thee, thy flaming self, my scorched eyes do dimly see it. Oh, thou foundling fire, thou hermit immemorial, thou too hast thy incommunicable riddle, thy unparticipated grief. Here again with haughty agony, I read my sire. Leap! leap up, and lick the sky! I leap with thee; I burn with thee; would fain be welded with thee; defyingly I worship thee!”

caint call your name
but your face is easy


just good to hold the world together
like hooved up ground

I would buy a whole 130-acre farm
for one hermit lark, his song,
especially his song at evening by a
pond:

In the swamp, in secluded recesses,
A shy and hidden bird is warbling a song.

Solitary, the thrush,
The hermit, withdrawn to himself, avoiding the settlements,
Sings by himself a song.

Song of the bleeding throat!
Death’s outlet song of life—(for well, dear brother, I know
If thou wast not gifted to sing, thou would’st surely die.)

F. Schuyler Mathews rose about 1900 to defend the hermit against the nightingale, the European challenger sung by everyone of clout from Shakespeare through Byron to Matthew Arnold: “The song of the hermit thrush is the grand climax of all bird music; it is unquestionably so far removed from all the rest of the wild-wood singers’ accomplishments that vaunted comparisons are invidious and wholly out of place.” After six or eight pages elaborating upon and illustrating the thrush’s range and brilliance, Mathews wraps up the once-heated North Atlantic controversy swiftly and cleanly—“There is no score of the nightingale which can compare.”

The clothing they gave me was smart but no good for train wrecks.
I continued to love despite all the traffic-light difficulties.
In most cases, a sane hermit will beat a good big man.
We waited in vain for the forest fire, but the bus was late.
All night we baked the government into a big mud pie.
Not one century passed without Shakespeare calling us dirty names.
With all those syllables, we couldn’t write a cheerful death notice.

—Bob Kaufman, out of “Song of the Broken Giraffe”
(Solitudes Crowded With Loneliness, 1965)

There’ll be plenty of time
When an acorn grows out of your ear
To accustom yourself to my ways,
To carve yourself a hermit’s toothpick.

How orderly it seems here in this all-but-last resort. I just saw an elf, a large red elf, with milk in its mouth. Dog breath, dog biscuits, dog dream in a field after phantoms and bones, a hermit’s bath of cloud.

My kingdom for a toothpick! My tadpole for a picnic!