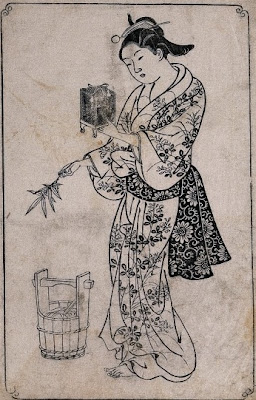 . . . you know only
A heap of broken images, where the sun beats,
And the dead tree gives no shelter, the cricket no relief,
And the dry stone no sound of water.

Some of the sounds bouncing from the stones are
nearly the same sounds they heard—resonant
human voices and the perwicka perwicka
of a quetzal in flight at a distance—
and give us access to them almost
through grinding cicadas and crickets
thrumming serrated thighs
though their domestic acoustics, the high
rubato laugh of children and the basso
continuo of city commotion
have precipitated out . . .

. . . after a hard freeze, say at the end
of November or very early December,

trash: what do these things mean,
starting so late as ghosts when the

hard water is dripping from its
prophecy of what's to come: dust-winged

living dead or doomed, the mockery of
summer, of fall, already shut down,

the crickets stunned silent where
they stood like little cargoes . . .

It seems to be so pure and innocent, yet the oak was Zeus’s tree, and had a dryad in it, a kind of girl Ariel, and the dove belongs to Aphrodite, and the cricket’s squeak and cluck is a symbol for shepherds letching after each other, or for the milkmaid with the sunburnt nose and slim bare feet in the daisies. So what looks like Wordsworth or Boratynski is actually Sicilian and pastoral, a long time after Theokritos. But it’s looking ahead to nature poetry, if we want to see it that way, of the kind we begin to get in Ausonius.

the field out back

Warmed-over gospel. Stick-figure truth.
Sang with a cricket caught inside my
throat.

Stuck tongue I sucked singing thru
cracks in a falling wall. Maybe my
own, maybe someone else’s.
Stuck
tongue bloated, foolish beauty.
One’s own

There’s the aphorisms
Settling out of this splendid knockabout
Gale wind, like leaves, surly,
Smiling miles off.

One is “The cricket is
A device the offended man, in retaliation,
Slips inside a letter to the
Offender. It erupts
The moment the envelope is opened.”

—John Latta, out of “Poem Beginning with a Line by John Latta” (Rubbing Torsos, 1979)

Any cricket can inherit a million, sit in a library and cook up a complicated or crotchety style. Plenty of Americans who know the importance of the word, if it is French or British, can be taught to do smooth puttying. But damned few know it and know the reward and would rather work with the basic difficulty to what end is not apparent.

Sounds of the animals & of the winds, waters, & forest, are for the most part triste,—whippoorwill, owl, veery, night-hawk, cricket, frog, & toad,—but the thrush, songsparrow, oriole, Bobolink, & others are cheerful.

With Dirce in one bark convey’d
Be glad poor beaste, love follows after thee
Till the cricket hops
but does not chirrp in the drill field
8th day of September
f       f
d
g
write the birds in their treble scale . . .

The only way to be quiet
is to be quick, so I scare
you clumsily, or surprise
you with a stab. A praying
mantis knows time more
intimately than I and is
more casual. Crickets use
time for accompaniment to
innocent fidgeting . . .

Cricket thought has stopped time’s allowance
and horn-brand light has sliced the tune
but the average of access is summed to a lozenge
and they’d better screen the train . . .

—Cathy Park Hong, out of “Hagglers in the Bazaar” (Dance Dance Revolution, 2007)

. . . was dipped in Hoily Olives and chrysmed in Scent Otooles; hears cricket on the earth but annoys the life out of predikants; still turns the durc’s ear of Darius to the now thoroughly infurioted one of God; made Man with juts that jerk and minted money mong maney . . .

Let Mephibosheth with the Cricket praise the God of chearfulness, hospitality, and gratitude.

I, my love, am to be Father of All Things. For this was I created, and to this will I cleave. Now this is the Race that shall be Ryder—those who can sing like the lark, coo like the dove, moo like the cow, buzz like the bee, cheep like the cricket, bark like the dog, mew like the cat, neigh like the stallion, roar like the bull, crow like the cock, bray like the ass, sob like the owl, bleat like the lamb, growl like the lion, whine like the seal, to say nothing of screeching like the parrots and all sundry cryings, wailings, belchings, gnashing, sighing, sobbing, screaming, such as one hears the world over, but from a thousand several throats. . . . Some shall be prophets, some sophists, some scoundrels, some virgins, some bawds, some priests, some doxies, some vassals, some freemen, some slaves, some mongers, some pamphleteers, some eunuchs, some hermaphrodites, some nobles, some pussywinks, some panders, some jades, some lawyers, some doctors, some presidents, some thieves; pro and con, for and against, though never one bourgeois or like to other men as we now know them, but at the fertile pitch of genius.

What more is there to love than I have loved?
And if there be nothing more, O bright, O bright,
The chick, the chidder-barn and grassy chives

And great moon, cricket-impresario,
And, hoy, the impopulous purple-plated past,
Hoy, hoy, the blue bulls kneeling down to rest.

Chome! clicks the clock, if there be nothing more.

You’ve talked to the sun and moon,
Those idols of stitched skin, bunch grass and twigs
Stuck on their poles in the fall rain;
You’ve prayed to Sweet Medicine;
You’ve looked at the Hanging Road, its stars
The stepstones and river bed where you hope to cross;
You’ve followed the cricket's horn
To sidestep the Lake of Pain . . .
And what does it come to, Pilgrim,
This walking to and fro on the earth, knowing
That nothing changes, or everything;
And only, to tell it, these sad marks,
Phrases half-parsed, ellipses and scratches across the dirt?
It comes to a point. It comes and it goes.

This is the buoyant meadow, a bottomless

while its fires aspire upward, & its interstellar crickets pulse:

Where once the world stood
surrounded,
on a cylindrical column, by a spherical bark

was circular, sublunary, wrapped in

—Ronald Johnson, out of “The Unfoldings” (The Valley of the Many-Colored Grasses, 1969)

I lay in bed all day rereading a novel about me:

“A cricket chirps and then dies.”