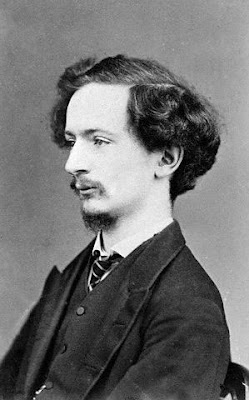 Bicycled in to work thrashed by a cold rain, water sopping in under the shiny ripstop gear. “Drip drop drip drop drop drop drop . . .” Completely random query: who—of John Ashbery and James Schuyler—do you suppose recently had been reading T. S. Eliot’s “Swinburne as Poet” at the onset of The Nest of Ninnies, Chapter Six:

“‘Snowdrops,’” Mrs. Bridgewater said in a clear voice, “‘that come before the swallow dares.’” Dr. Bridgewater, anxiously watching Victor get the car out of the garage, held his peace.

Mrs. Bridgewater, apparently to the minor unsettlement of Dr. Bridgewater, butchering a line out Shakespeare’s The Winter’s Tale wherein Perdita talks of “daffadils, / That come before the swallow dares, and take / The winds of march with beauty . . .” Eliot, arguing that, for Swinburne “the word . . . gives him the thrill, not the object”:

When you take to pieces any verse of Swinburne, you find always that the object was not there—only the word. Compare

Snowdrops that plead for pardon
And pine for fright

with the daffodils that come before the swallow dares. The snowdrop of Swinburne disappears, the daffodil of Shakespeare remains.

(The pining snowdrops line out of Swinburne’s “Before the Mirror” (“Soft snows that hard winds harden / Till each flake bite . . .”)

Thumbing through Marianne Moore’s “Idiosyncrasy and Technique” I spotted her quoting “Rolfe Humphries, in his little treatise entitled ‘Writing the Lyric’”:

“Take the letter s,” he says, “one of the most insidious sounds in the language, one which will creep in, in a sibilant reptilian fashion like the original serpent in the garden, and if you are not careful, not only drive you out of Paradise, but hiss you off the stage; . . . see if you cannot write a quatrain without using it at all.”

(Moore’s clipped—and somewhat enigmatic—reply: “Pondering my ‘Blessed is the man who does not sit in the seat of the scoffer,’ I could only say that another’s expertise might save one considerable awkwardness.”) Humphries’s enjoinder, though, points obliquely at the lipogram, minor darling of the Greeks resurrected by members of l’Ouvroir de Littérature Potentielle. William T. Dobson, out of Literary Frivolities, Fancies, Follies and Frolics (1880):

Lipogram is the name applied to a species of verse in which a certain letter, either vowel or consonant, is altogether omitted——that is to say, the author in what he writes will avoid the use of one letter in particular; a kind of literary work involving an amount of labour and ingenuity altogether inadequate to the result achieved . . .

Dobson reports that “the Greek poet Lasus (538 B.C.) . . . wrote an ode upon the Centaurs and a hymn to Ceres without inserting the letter s in the composition” and that “the works of Pindar also contain an ode in which the letter s does not appear,” adding glumly: “if this kind of literary folly has little beauty, it has at least the sanction of antiquity.” Joseph Addison, in The Spectator (No. 62, 11 May 1711), sees in the lipogram the result of “false Wit”:

As true Wit generally consists in this Resemblance and Congruity of Ideas, false Wit chiefly consists in the Resemblance and Congruity sometimes of single Letters, as in Anagrams, Chronograms, Lipograms, and Acrosticks: Sometimes of Syllables, as in Ecchos and Doggerel Rhymes: Sometimes of Words, as in Punns and Quibbles; and sometimes of whole Sentences or Poems, cast into the Figures of Eggs, Axes, or Altars: Nay some carry the Notion of Wit so far, as to ascribe it even to external Mimickry; and to look upon a Man as an ingenious Person, that can resemble the Tone, Posture, or Face of another.

No monk too good to rob, or cog, or plot,
No fool so gross to bolt Scotch collops hot.
From Donjon tops no Oronooko rolls.
Logwood, not Lotos, floods Oporto’s bowls.
Troops of old tosspots oft, to sot, consort.
Box tops, not bottoms, schoolboys, flog for sport.
No cool monsoons blow soft on Oxford dons,
Orthodox, jog-trot, book-worm Solomons!
Bold Ostrogoths of ghosts no horror show.
On London shop-fronts no hop-blossoms grow.
To crocks of gold no dodo looks for food.
On soft cloth footstools no old fox doth brood.
Long-storm-tost sloops forlorn work on to port.
Rooks do not roost on spoons, nor woodcocks snort.
Nor dog on snowdrop or on coltsfoot rolls,
Nor common frog concocts long protocols.

Dobson lists the source thus: “an ingenious writer in Notes and Queries some years ago.” The lines here, differing in a few particulars, appear in No. 209, 29 October 1853, with the note: “Although I am the veritable K. I. P. B. T. of the former Notes, I sign myself now, in accordance with more recent custom. Harry Leroy Temple.” Oddly enough, Dobson apparently saw fit to bowdlerize the line “Box tops, not bottoms, schoolboys, flog for sport”; he replaces it, ineptly, with the non-“univocalic” (and awkward) “Box tops our schoolboys, too, do flog for sport.” Humorlessness and prudery. Completely random query: did Christian Bök paw idly through Dobson’s Literary Frivolities prior to Eunoia? Another vowel in the column reads:

“The veritable K. I. P. B. T.” Not an abbreviation as I’d suspected. Merely a pseudonym. In the “former Notes” in question, I find the following:

Of course the general meaning of these two verses is obvious enough. But how is the latter to be read? Are we to read “dallies on,” as one word, i.e. keeps dallying, and “skort” (as a mere abbreviation of the Latin “scortum”) as nominative in apposition with “wife?” If so, the verse is intelligible, though harsh enough even for Hall.
If not, the word “skort” must have some other meaning which I am unacquainted with. I cannot find it at all in Halliwell, the only authority I have at hand to refer to.
K. I. P. B. T.

I think my clothes are dry now.
Posted by John Latta at 8:27 AM