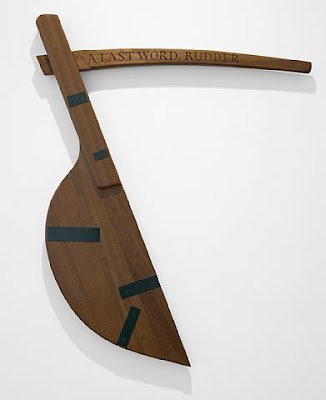 —Gertrude Stein, out of “Regular Regularly in Narrative” (How to Write, 1931)

I also saw a fleet of canal-boats—a wilderness of domesticity. They lay like villagers and greenhorns in the water—the tide bounced them about like huge, clumsy logs. I could not help being a bit contemptuous. A dead cat lay under the rudder of one. Nearby was a little butterfly hunting sustenance. Silly jumble!

In storms and
at sunset, with the metallic coils of the tide
around my fathomless arms, I am unable
to understand the forms of my vanity
or I am hard alee with my Polish rudder
in my hand and the sun sinking. To
you I offer my hull and the tattered cordage
of my will.

—Frank O’Hara, out of “To the Harbormaster” (Meditations in an Emergency, 1957)

My heart was to thy rudder ty’d by th’ string
And thou should’st towe me after.

—William Shakespeare, out of Antony and Cleopatra (1623)

For it is certain that you will rise from the bench a new person, and even before you have emerged into the full daylight of the street you will feel that a change has begun to operate in you, within your very fibers and sinews, and when the light of the street floods over you it will have become real at last, all traces of doubt will have been pulverized by the influx of light slowly mounting to bury those crass seamarks of egocentricity and warped self-esteem you were able to navigate by but which you no longer need now that the rudder has been swept out of your hands, and this whole surface of daylight has become one with that other remembered picture of light, when you were setting out, and which you feared would disappear because of its uniqueness, only now realizing that this singleness was the other side of the coin of its many-faceted diversity and interest, and that it may be simultaneously cherished for the former and lived in thanks to the versatility of the latter.

There is the sea, moving the bulk-
head with its horse strength; and the multiplicity of rudders
and propellers; the signals, shrill, questioning, peremptory, diverse;
the wharf cats and the barge dogs—it

is easy to overestimate the value of such things. One does
not live in such a place from motives of expediency
but because to one who has been accustomed to it, shipping is the
most congenial thing in the world.

The back-swell now smooth in the rudder-chains,
Black snout of a porpoise
where Lycabs had been,
Fish-scales on the oarsmen.
And I worship.
I have seen what I have seen.

Then, with a snap here and a snap there, as if he were closing the sections of a folding ruler, whistling a melody by Luigi Boccherini as he worked, he collapsed the boat, mast, rigging, hull, keel, rudder and all, into a handful of sticks and cords. These he doubled over again and again, tucked them in with a napkin’s worth of sails, and stuffed the lot into the zippered pocket of his windbreaker. His chart and compass he shoved into the pocket of his smitch of white pants.

If rightly made, a boat would be a sort of amphibious animal, a creature of two elements, related by one half its structure to some swift and shapely fish, and by the other to some strong-winged and graceful bird. The fish shows where there should be the greatest breadth of beam and depth in the hold; its fins direct where to set the oars, and the tail gives some hint for the form and position of the rudder. The bird shows how to rig and trim the sails, and what form to give to the prow that it may balance the boat, and divide the air and water best.

—Henry David Thoreau, out of A Week on the Concord and Merrimack Rivers (1849)

By viewing nature Nature’s handmaid, Art,
Makes mighty things from small beginnings grow:
Thus fishes first to shipping did impart
Their tail the rudder and their head the prow.

If Lizards or Serpents haue their tailes cut off from their bodies, they will grow againe. In fishes they serue in good stead, as rudders and helmes to direct them in their swimming: yea they fit their turnes as well as oares, to set them forward as they stirre them, to this or that hand.

The nothing of the day is a machine called the Velocepede. It is a wheelcarriage to ride cock horse upon, sitting astride and pushing it along with the toes, a rudder wheel in hand. They will go seven miles an hour. A handsome gelding will come to eight guineas, however they will soon be cheaper, unless the army takes to them. I look back upon the last month and find nothing to write about, indeed I do not recollect one thing particular in it. It’s all alike; we keep on breathing. The only amusement is a little scandal of however fine a shape, a laugh at a pun and then after all we wonder how we could enjoy the scandal, or laugh at the pun.

The boat. Room, as in the waggonette, for twice as many, three times, four times, at a pinch. A land receding, another approaching, big and little islands. No sound save the oars, the rowlocks, the blue sea against the keel. In the stern-sheets Lady Pedal, sad. What beauty! she murmured. Alone, not understood, good, too good. Taking off her glove she trailed in the transparent water her sapphire-laden hand. Four oars, no rudder, the oars steer.

The Ancient Egyptians believed the seat of the soul was in the tongue: the tongue was a rudder or steering-oar with which a man steered his course through the world.

They say Charon the boatman plies his oar
inside the tiniest burst arteriole
just like a ship placed inside a bottle
his craft can negotiate passages
so small, simply to consider
the beauty of such navigation assuages
the sense of justice, elsewise unconsoled
in this technomedical age (“I’ll get out alive!”)
which assumes the drowner dodges
the swinging bluntness of the rudder:
a chance equal to that of a wave avoiding the shore