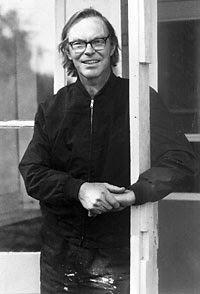 Back up out of the several cities, the several smeared—with hurtling ease—into one city, its clamor and rev. Siren, jackhammer, lurch and gab. Walking gizmos walking with gizmos, prodding such repeatedly, impeaceably. Inert robotics of the screen-bound. And home to Metcalf (Waters of Potowmack) quoting John B. Calhoun’s 1952 paper “The Social Aspects of Population Dynamics”:

Wherever animals live they are constantly altering the environment about them. This occurs through such diverse phenomena as release of excreta, alteration of surrounding temperature and humidity, construction of trails and burrows, and the development of habits, all of which may alter the behavior of members of their own or later generations.

As soon as animals begin to condition their environment through the elaboration of relatively permanent artifacts such as trails, nests, burrows, and the like, biological conditioning assumes a more definite cultural aspect. To be sure, such artifacts satisfy primary organic requirements: dens are a place of retreat from enemies or inclement weather; nests are places where the young are safe; trails lead to food or harborage, and food caches serve to make food more accessible. However, beyond such primary functions, dens, nests, trails and the like further serve as a physical mold in which the social matrix takes its form.

If one looks at human beings in the way that the early slave traders did, conceiving of their space requirements simply in terms of the limits of the body, one pays very little attention to the effects of crowding. If, however, one sees man surrounded by a series of invisible bubbles which have measurable dimensions . . . it is then possible to conceive that people can be cramped by the spaces in which they have to live and work. They may find themselves forced into behavior, relationships or emotional outlets that are overly stressful . . . When stress increases, sensitivity to crowding rises—people get more on edge—so that more and more space is required as less and less is available.

For the hard-charging sociologists of la poesía norteamericana, a note (out of Calhoun), possibly explicatory of the various “schools”: “Perception of spatial relationships may have repercussions directly or indirectly on both social behavior and population dynamics, because patterns of locomotion through an environment alter the rate of contact between associates, as well as their orientation to the physical structures of the habitat.” Thus, in various “litters of dogs . . . raised in 20 x 70-foot pens”:

Snow trails reveal the manner in which the dogs utilize their confined area. Wirehaired Fox Terriers beat a single path about the periphery; Cocker Spaniels also beat a path about the periphery of the pen, but they also beat a few trails diagonally across the pen; Beagles and Basenjis form trails as do Cocker Spaniels, but in addition there are occasional to frequent wanderings away from the paths through the otherwise unbroken snow; and finally, the opposite extreme from the Wirehaired Fox Terriers is exhibited by Shetland Sheep Dogs—their tracks appear to be distributed completely at random over the pen with very little indication of a peripheral trail adjacent to the fence.

Or some few, of breed sempiternal and undetermined, stand stock still unyelping, pierced by a muteness, unsatisfied, unconsoled, and wild.
Posted by John Latta at 5:18 AM