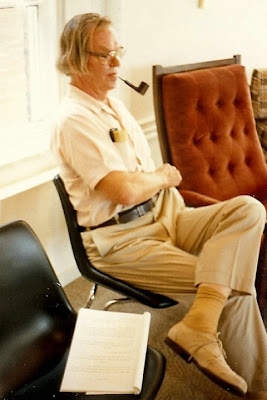 Rather peremptorily “Called Back” (see Emily Dickinson to “Little Cousins” Louise and Frances Norcross) to Metcalf whilst perusing A Garden Carried in a Pocket: Guy Davenport / Jonathan Williams Letters 1964-1968, looking (unsuccessfully) for any reference to John Cournos (only mention I see is Davenport asking Williams (29 October 1964): “Do you have something elegantly brief which a Harvard Press might do? Snazzy typographers . . . with a hand-press, golden-eggs-from-goose scarcity of output. I’ve edited their first piece (an unpublished letter from Gaudier-Brzeska, written from the frozen trenches, 1915, where he imagines himself ‘one of Ezra’s bowmen of Shu’)”—letter identified in Davenport’s “Postscript” to Twelve Stories as being shown him by Cournos at Haverford) . . .

I see, too, that Davenport wrote a review of Metcalf’s Genoa (1965). Williams, in Perugia, and recently “in Venezia with the old man” (Pound), writes thanking Davenport (19 June 1966): “It will, unquestionably, be the only articulate, decent notice paid the poor book. We live in a funny place. Pound can only shake his head, sadly. He knows. We all know. But that doesn’t simplify anything, really . . .” (Williams’s Pound is seen, too, “mostly muttering about how he had done nothing in his life but make a little noise in behalf of those that nobody was taking seriously . . .”)

Davenport reviews Metcalf’s Genoa in The National Review (XVIII: 18, 3 May 1966) along with John Hersey’s Knopf-backed Too Far to Walk (“an updated version of the Faustus legend, and not Goethe’s transcendental one, either, but the starker, tragic one of Marlowe. Our John Fist is Johann Faust, our corrupting upper-classman Breed is Mephistopheles, with LSD for kicks, a whore for Helen, and a cheap acte gratuit (trust the Devil to have been reading Dostoievski and Gide) for the thrill of sin”). Against Hersey’s story of “Puritan duplicity” (in Davenport’s words: “The darkest cranny of the Puritan mind is that it found sin intolerable in others, while all too frequently it found cause to taste a little itself, on the sly” or “My misbehavior is Romantic; yours is disgusting. I am uninhibited; you are a pervert. I am Faust; you are a clod . . .”) is posed Metcalf’s work with its “insistence on the wholeness of life,” unmistakably and dignifiedly kept nigh by “an unnerving awareness of the monstrousness of the human body, and of the indignities and suffering of the body.” Davenport begins by comparing numbers: against Hersey’s ubiquity (“thousands of copies”):

Paul Metcalf’s Genoa, beautifully printed by Andrew Hoyem in San Francisco, designed by the poet-printer Jonathan Williams, distributed by a few bookstores only (like all of Williams’ Jargon Books, of which this is number 43), will be read by an infinitesimally small audience. One can say why without even opening the volumes. The jacket of Mr. Hersey’s novel is like an ad; title and author stand in poster type, and the blue face of a Troubled Youth emerges from a generous expanse of black. The cover of Genoa has no words at all: six photographs, instead—a diagram of a breech birth from Gray’s Anatomy, a whale, a portrait of Columbus, another of Herman Melville, another of Mrs. Bonnie Brown Heady and Carl Austin Mills together (the kidnapers and murderers of Bobby Greenlease, in 1953), and a stripper in a night club. Put all these together and you have the material out of which Mr. Metcalf has made his remarkable narrative.
Genoa is not, however, about these things. It purports to be a document from the hand of Carl Mills’ brother, a club-foot doctor whose life has been bookish and responsible, free of the demon that drove his brother to one of the most brutal and demoralizing crimes in our history. (Mrs. Heady gave as her sole explanation for the murder the desire she had always had for “a big round bed with silk sheets.”) Mr. Metcalf’s reconstruction of Carl Mills’ past is fictional, just as his narrator is Mills’ brother in the sense that we all are.

Mr. Metcalf (who is Melville’s great-grandson) has chosen to look at the horror of Carl Mills with the poet’s big eyes: eyes that are not content to look at yesterday (like Dreiser) or at the edges of the social order (like Zola), but with eyes that try to see all the way back to the American wholeness. He tells three narratives at once, the story of Columbus, of Melville, of Mills. “Tell” is not the word. He shows, he displays the original accounts; he knows his way around Melville with a sureness that will make the scholars blush (and discloses a theme in Melville that twenty years of burrowing by the Ph.D.’s missed—a theme so beautifully disclosed clue by clue that the reviewer can only say, See it for yourself).
And what is he saying? It is wiser to ask what language he’s speaking. It’s worthwhile pointing out that he’s speaking a language that Hawthorne would have understood, . . . with a hunch that nineteenth-century voices are beginning to make sense that we’d never suspected before. He is speaking with the language of Charles Olson, the poet who wrote the first perspicacious study of Melville, Call Me Ishmael, and whose Maximus poems are one of the chief documents of the nation’s conscience. He is also speaking the language of William Carlos Williams, whose honest voice is evident everywhere in this strange book. Add to these the voice of Columbus (heroic, peculiarly dramatic, haunting) and of Melville, and you have some idea of the richness of this narrative.
Mr. Metcalf weaves the three themes skillfully, making them touch just when they can speak in concert, disclosing ironies, deepening the intuitive evidence that there is a plot to American history. This is a history book, a critical work, a psychological study, a valid novel, and yet not quite any of these. Mr. Metcalf has made his own form, his own sense of the propriety of telling these three tales together. It is a book to read with astonishment and then to re-read with the familiarity of a second time through, to see the lines of force that have made the patterns. This is a clear book; it is by no means a pretty one. Mr. Metcalf’s insistence on the wholeness of life keeps it close to an unnerving awareness of the monstrousness of the human body, and of the indignities and suffering of the body. His skill at juxtaposing human gestures keeps us from becoming suspended in either admiration or disgust: it was ambition and great daring that motivated Columbus and Carl Mills. Melville, whose mind had plumbed some nameless blackness (“God’s foot on the treadle,” as he says in Moby Dick), stands between the hero and the monster, partaking of each, capable of understanding both.
The history of American letters is filled with books like Mr. Metcalf’s Genoa (Melville’s own, for an obvious example), written with genius but with no bow toward public taste of the fashions of the time. Invariably we regret, years later to be sure, that we didn’t have the perspicacity to see the goodness of the book at the time. Here’s your chance . . .

One recalls Melville’s own monstrous shrug and defiant refusal of the meanness of the public way (out of Pierre, the book Melville dedicated to a mountain in the Berkshires):

Among the various conflicting modes of writing history, there would seem to be two grand practical distinctions, under which all the rest must subordinately range. By the one mode, all contemporaneous circumstances, facts, and events must be set down contemporaneously; by the other, they are only to be set down as the general stream of the narrative shall dictate; for matters which are kindred in time, may be very irrelative in themselves. I elect neither of these; I am careless of either; both are well enough in their way; I write precisely as I please.

And, pertinent too (or impertinent—“I write precisely as I please”), how, in the cold honey-colored sun of six-thirty a.m., caught bicycling at a railroad crossing whilst a forty-some car freight train clanged and rocked clumsily by, I perched one-footedly earth-bound and read the graffiti. Identified mightily with one spheroid-headed cartoon boy rolling along with mouth in a frown, hint of a smirk nevertheless evident. Labeled: “FAUX CARTOGRAPHER.” Nous sommes tous des cartographes faux . . .
Posted by John Latta at 6:57 AM