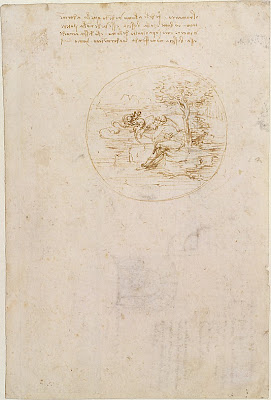 Leonardo da Vinci, “Allegory on the Fidelity of the Lizard,” 1496
(“Script reading from right to left: ilramarro . fedele allomo vede[n]do quello adorme[n] / tato . co[n] batte . cholla bisscia esse vede no[n]lla potere / vincere core sopra ilvolto dello mo . ello dessta accioche / essa . bisscia nonoffenda loadorme[n]tato . homo— The lizard faithful to man, seeing him asleep, fights with the snake, and as he [the lizard] sees that [he] cannot conquer her [the snake], he [the lizard] runs over the face of the man to wake him so that the snake may not harm the sleeping man.”)

Out of the tenuous weekend, its foibles and repairs, its trajectories and retreats, a thin memory:

Near the close of the 15th century
the wine-dresser of Belvedere caught a lizard,
which he presented to Leonardo da Vinci,
who constructed out of the skins of other lizards
two miniature wings, filling them with mercury
so that they moved and trembled when the lizard walked.
And he made for his pet a little beard and some horns,
and kept it in a box; and it gave him pleasure
to offer his friends this grotesque creation.
To think deeply right now would terrify me.

Evan S. Connell, Jr.’s Notes from a Bottle Found on the Beach at Carmel (1962). The final line a recurring tag. (I recall reading it originally in a Mary Ruefle piece in Life Without Speaking (1987), epigraph to “Gigantic Brazen Head”: “Woebegone, / if only I were free / to be a tugboat. / Woebegone, the word, / if I were only the word—”) Connell’s story out of Vasari:

Leonardo, therefore, having composed a kind of paste from wax, made of this, while it was still in a half liquid state, certain figures of animals, entirely hollow and exceedingly slight in texture, which he then filled with air. When he blew into these figures he could make them fly through the air, but when the air within had escaped from them they fell to the earth. One day the vine-dresser of the Belvedere found a very curious lizard, and for this creature Leonardo constructed wings, made from the skins of other lizards, flayed for the purpose; into these wings he put quicksilver, so that when the animal walked, the wings moved also, with a tremulous motion: he then made eyes, horns and a beard for the creature, which he tamed and kept in a case; he would then show it to the friends who came to visit him, and all who saw it ran away terrified. He more than once, likewise, caused the intestines of a sheep to be cleansed and scraped until they were brought into such a state of tenuity that they could be held within the hollow of the hand, having then placed in a neighbouring chamber a pair of blacksmith’s bellows, to which he made fast one end of the intestines, he would blow into them until he caused them to fill the whole room, which was a very large one, insomuch that whoever was within was forced to take refuge in a corner: he thus showed them transparent and full of wind, remarking that, whereas they had previously been contained within a small compass, they were now filling all space, and this, he would say, was a fit emblem of talent or genius.

Next page, in the Connell: “Adequate knowledge assumes its form.” (Guy Davenport’s version—out of Shaker Mother Ann Lee: “Every force evolves a form.”) And, a few lines along: “Each detail I have loved, for its own sake.” Reading Connell’s sparely commented arrangements here—and in Points for a Compass Rose (1973)—I think of both Eliot Weinberger’s essays and David Markson’s late novels. Readers, collectors, essential delvers within—see William Caxton’s edition of Guillaume de Deguileville’s The Pylgremage of the Sowle (1483): “More necessary to the land is a diker and a deluer than a goldsmyth.” Enough.
Posted by John Latta at 5:45 AM