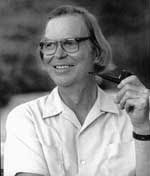 Metcalf, succinctly, out of “The Making of a Play” (Where Do You Put the Horse?):

My effort in all the books, beginning with Will West, has been to collapse time, to create a plane on which events of all periods may occur at once, to create tensions that one finds in the static arts, that I found so forceful, for example, in the color associations of Josef Albers—the chemistry of a red against a green, etc.

Reliably juxtaposing: heritage of the Imagists. Arrangement pointing at a tendency. Word running counter to word, and simultaneously pushed up against it. In a piece largely about Emily Dickinson (“Manacle Your Icicle”), Metcalf quotes Melville (out of “Cock-A-Doodle-Doo!”): “And that crash on the railroad just over yon mountain there, where two infatuate trains ran pell-mell unto each other, and climbed and clawed each other’s back; and one locomotive was found fairly shelled like a chick, inside of a passenger car in the antagonist train . . .”

In a piece largely about the paintings of Lucien Freud (“Melville and Freud (Lucien, That Is)”), Metcalf quotes Elizabeth Renker’s Strike Through the Mask: Herman Melville and the Scene of Writing (1996):

Physically, too, writing was a struggle for Herman: his handwriting was illegible; he found spelling impossible; and, among other ailments, he suffered from eye, back, and head trouble that made the activity painful. . . .The physical engagement with the written page that threatened Herman in such a profoundly physical sense was in fact a violent one: he disfigured the surface of his writing paper, filling up every available white space with writing as well as with cross-outs, revisions, carets, circles, and other manipulations. He cut pages apart and pinned passages together; he wrote on both sides of the page; he turned the paper upside-down and wrote some more . . . When he was writing at white heat, his hand became increasingly rough and more and more abbreviated and elided.

Melville plunged the act and method of writing into the substance of what he wrote. Something comparable happened when, first Cezanne, then Picasso and Braque, then the Abstract Expressionists, broke up the surface of the canvas, making the painting both in and on it.
It can be argued that Melville’s career as a writer was destined to fail, he simply could not be understood—until these painters had opened the door for him. When painting passed from representational to abstract, a recognizable face was erased. The canvas became faceless—with a new language of hieroglyphics.
Melville covered the page with writing, so as to obliterate all white space.
He used colored pencils for editing.
The manuscript was an object to him, as much so as is the canvas to the painter.

In a review (called “Conscious American Roots”) of a book of Edward Dahlberg’s essays, Metcalf quotes Melville’s Clarel—positing how:

Sequel may ensue,
Indeed, whose germs one now may view:
Myriads playing pygmy parts—
Debased into equality:
In glut of all material arts
A civic barbarism may be:
Man disennobled—brutalized
By popular science—

Lines that end: “atheised / Into a smatterer . . .” “To create a plane on which events of all periods may occur at once” akin to a grand and Godless leveling. Metcalf’s odd ambivalence vis-à-vis Melville: against such constant referencing there’s, too, things like Metcalf’s jocular yelp of “Off my back, please!” in reply to the Sagetrieb interviewer’s mention of Melville (“You’ve described your relation with Melville as having a monkey on your back—”). Is some modicum of Metcalf’s dodge Melville caution a result of finding in Melville’s work itself a means and method? For suddenly it seems obvious: Metcalf’s “documentary” poetics is right there in nuce (and plain sight) in Melville’s much-vaunted series of “extracts” prologuing Moby-Dick, that “glancing bird’s eye view of what has been promiscuously said, thought, fancied, and sung of Leviathan, by many nations and generations, including our own.” Thus (a random scoop out of the water):

“Several whales have come in upon this coast (Fife). Anno 1652, one eighty feet in length of the whale-bone kind came in, which, (as I was informed) besides a vast quantity of oil, did afford 500 weight of baleen. The jaws of it stand for a gate in the garden of Pitferren.”
Sibbald’s Fife and Kinross.

“Myself have agreed to try whether I can master and kill this Sperma-ceti whale, for I could never hear of any of that sort that was killed by any man, such is his fierceness and swiftness.”
Richard Strafford’s Letter from the Bermudas.
Phil. Trans. A.D. 1668.

“We saw also abundance of large whales, there being more in those southern seas, as I may say, by a hundred to one; than we have to the northward of us.”
Captain Cowley’s Voyage round the Globe. A.D. 1729.

*  *  *  *  * “and the breath of the whale is frequently attended with such an insupportable smell, as to bring on a disorder of the brain.”
Ulloa’s South America.

“To fifty chosen sylphs of special note,
We trust the important charge, the petticoat.
Oft have we known that seven-fold fence to fail,
Tho’ stuffed with hoops and armed with ribs of whale.”
Rape of the Lock.

“If we compare land animals in respect to magnitude, with those that take up their abode in the deep, we shall find they will appear contemptible in the comparison. The whale is doubtless the largest animal in creation.”
Goldsmith, Nat. His.

“If you should write a fable for little fishes, you would make them speak like great whales.”
Goldsmith to Johnson.

“In the afternoon we saw what was supposed to be a rock, but it was found to be a dead whale, which some Asiatics had killed, and were then towing ashore. They seemed to endeavor to conceal themselves behind the whale, in order to avoid being seen by us.”
Cook’s Voyages.

A mustering, arranged to exhibit a tendency. How’d Mother Ann Lee put it: “Every force evolves a form.” Isn’t what Metcalf is doing in a book like Mountaineers Are Always Free! (1991) a brash honorary mimicking of Melville’s own needlessly self-deprecatory work of the “mere painstaking burrower and grubworm of a poor devil of a Sub-Sub”? Here, the bibliographical pointers allowed to accumulate at the end, and the arrangements roughly topical and chronological, all, though, under the blazing standard of “West Virginia.” A scoop (here, how “in the 1960s Point Pleasant was the center of a UFO-monster ‘invasion’”):

“A huge, bird-like creature, with glowing red eyes, had suddenly dropped like a heavy wet sack upon the sand of the yard. It made a flapping, gurgling sound as it righted itself and stood up.”

"There, blocking the road, crouched a huge black thing. Ape-like in appearance, it straightened up and stood about eight feet tall. It seemed to be watching them with curiosity and remained in the middle of the road for about 30 seconds while the two youths, now near panic, wondered what to do. Then the creature waddled off into the woods and they gunned the car out of there.”

“No one noticed a nose or mouth, only eyes, or eye-like openings, from which projected ‘greenish-orange beams of light.’ These light beams pierced through the haze pervading the scene . . . No one is sure whether the shape rested on the ground or was floating . . . there was a strange, nauseous odor resembling burning metal, or burning sulfur.”

“. . . they saw two red eyes glaring at them; a huge monster, ten feet tall, breathing fire, with a bright-green body and a blood-red face, waddled toward them, and they turned and ran.”

“He wore a silvery skin-tight costume and had very long silvery hair.”

“It didn’t seem to be walking exactly. It was almost gliding . . . faster than any man could run.”

“. . . an overpowering odor, ‘like metal,’ that so sickened them they vomited for hours afterward.”

“Its head, all the witnesses agreed later, was shaped like an ‘ace of spades.’”

“It loved to chase cars, and frighten menstruating women.”

Two leviathans.
Posted by John Latta at 6:26 AM