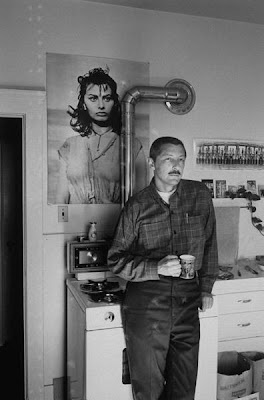 Evan S. Connell, Jr., out of Notes from a Bottle Found on the Beach at Carmel (1962), that book of marvels and commonplaces, or signs and wonders, or myths and texts, a florilegium of a book, a chrestomathy:

We fully recognize and admit that our completed image
is not merely a reconstruction of separate, constituent,
and unrelated impressions; but rather we tend to perceive
certain shapes and patterns both naturally and readily;
and these we select out of whatever may contain them,
regardless of their disguise.

A kind of maker’s credo mid-assembling. And, too: “I must look for significance in the past.” In a 2001 Bookforum interview, Connell made such unregimented processual intuiting central:

I don’t know how or why anything develops, nor am I conscious of a link between fiction and nonfiction. Very often a character or situation emerges from another writer’s work, and I ask myself if I could use it. In other words, how could it be stolen? Thievery has a long if questionable pedigree. Scribblers from Shakespeare on down have borrowed, parodied, copied, paralleled, imitated. Sculptors and dancers and painters and guitarists probably do the same. Years ago I tried to analyze and calculate everything. Now I depend more on experience and, perhaps, intuition. If a beginning feels right, I continue. Maybe it will reach an identifiable destination, maybe it will wander toward the unknown, maybe it’s a cul-de-sac.

A sense—particularly in Notes . . . and Points for a Compass Rose (1973), both lineated, discontinuous, formally paratactic works of selecting and arrangement, meandering and return (the temporal itself expunged under the hazard and felicity of mere placement, the Atomic Age nudging up against the prehistoric and becoming it*)—of Connell’s being akin to Metcalf. Their refusals of sequence, of any cobbled up narratory ruse, its incidental shilling for totality. Connell mayhap a more diffusory Metcalf, world-dispersing. Against Metcalf’s American continent and the enormity of its pushes within and without: Connell’s medieval alchemy, the onslaught of mystery and waywardness. In common: a sense of man’s essential folly and piggery, and love, and the violence of its lack. A random offering:

Someone just now has inquired concerning
the usage of a device I am building.
I will respond in this way:
When the Greeks were studying the shape of the ellipse
they could imagine no purpose for its shape,
but yet their investigations were requisite preliminaries
to later, eminently practical discoveries.
Therefore, the question is not valid.
When I have completed the fine adjustments
I will show the citizenry where to look;
each then shall be privileged to observe for himself
the phenomenon of which I often have spoken,
which gradually is fading out of sight
and will be lost entirely to our descendants,
diminishing through various causes,
certain of which are explicable, but others less so,
not unlike the magnitude of nations.

We are a tree, as we are its fruit.

The sun rides low in the north, very near to the horizon;
seasons alter. I have a letter from my wife,
who has told our children that I am drowned and
never to come home. Why should I feel as desolate
as I do? All journeys end.

The dolphin can tell if the drowned sailor
ever has tasted dolphin flesh;
if he has, the fish will devour the body; but if not,
the fish will nudge his body ashore.

Now, whoever is not unacquainted with the writings
and disputes of various philosophers
will acknowledge that no small part of them is spent
on the subject of abstruse ideas. For instance,
according to Cardanus, an emerald placed on the tongue
will assuage the most violent grief.
And yet this is not to be taken literally.

The motion of the head can transmit to the beholder
affection, approval, badinage, curiosity, and remembrance.
The confluence of the hand, head, eye, and brow
results in variations as infinite and filled with meaning
as are the words of a supreme poet.

In certain countries the great masters of any art
will never teach for money.
There are measurements other than those we know.

The celebrated star of Tycho Brahe
first was observed on the 11th day of November
in the year 1572, not long after the massacre
named for Saint Bartholomew, who was flayed alive
and hung, head downward, for his belief.
Thirty thousands were cruelly slaughtered
by order of Catherine de Medicis, the Duke of Anjou,
and others. Astrologers proclaimed the Star of Bethlehem
had come to announce the end of the world.
But when seventeen months had gone
the star of Brahe dimmed and was not seen again;
nor any disaster fell, save what was occasioned
by human fright and folly.

The cinders of a city have written
smokily against wall: Thou art . . .

It is time to be exact. According to Thomas Browne,
being ignorant of evils to come, or forgetful
of evils past, is a merciful provision of Nature
whereby we digest the mixtures of our few days, and,
our delivered senses not relapsing into remembrance,
our sorrows are not thus kept alive and raw
through the chancre of needless repetition. Yet
I would say that as we so entrust this present state,
few shall mark the diligence of our journey’s end,
white with ashes.

After the Enola Gay completed its flight
rape, robbery, and murder became not uncommon.
Schoolgirls turned willingly into whores
and their brothers grew into thieves. Despair
and hunger drove them, but also the appeal of chaos.
Later, it is said, these strangely experienced children
spoke with nostalgia of that time, just as
the shore becomes visible after its highest tide.

I was walking with my son in the direction of the estuary
where I meant to explain, as best I could,
the genesis of those incalculable conditions
which now afflict us, when we encountered a child
peeling shreds of skin from her body.
Her lips had melted, and she was blinded,
yet I think she was not unaware; it seemed to both
my son and myself that we could hear singing,
although it is possible we were somehow deceived.

Each of the world’s religions has prophesied
a fiery ending to the reign of Man.

Be any man laden with sick
women, children, sisters, or domestics, or be
he ill himself,
then let them lie where they be;
and we praise him, too,
if he would burn himself, or
that feeble person.

There was a moral factor, as I am the first to admit. I
have been meaning to . . .

We recognize, of course, how the presence of
each individual augments the total preparation;
during the 14th century incest was permitted,
if practiced upon an altar.

Fear him who trod upon the ape and the basilisk,
who conquered the lion and the dragon!
In the year 1350 the faithful were summoned to Rome
to celebrate the Jubilee and a marked lessening
of the Plague. But with these pilgrims came the flea,
so that out of every hundred, not one survived.
This may be regarded as a significant lesson for today.

The law of non-contradiction states that any proposition
and its opposite cannot both be true, and that whatever
implies a contradiction, or offers two values negating
each other, by definition must prove unreal; from which
we distinguish truths of fact from truths of reason.

Aquinas was of the opinion God alters the universe
at His pleasure, but yet there is one restriction:
He must obey the logic of Aristotle.
He may create, however He wills, a five-tailed ass,
but always a triangle shows three angles.

Proceeding by its juxtaposited parts, though each notably less textually “raw” (ab origine) than Metcalf’s . . .

* Connell, in an interview: “I think the alchemists are somehow related to the twentieth-century physicists, and especially to the people who created the Bomb. And as regards the way we look at the world, the transmutation of one substance into another is, it seems to me, related to what the alchemists were attempting to do. Not logically, but viscerally.” Too, Connell points to poet and Kayak-editor George Hitchcock, who, after twenty pages or so of Notes . . . had appeared in the Sausalito literary magazine Contact (c. 1959), “said how much he had liked that thing. He asked me if I could do a book entirely in that style. I’d never thought of it. But he was so obviously interested that I began thinking about it, and I decided that I’d see if I could carry on with it for a book-length manuscript . . . It just grew like a tree. I just went back to the original twenty pages and kept meditating on that, and it branched out.”