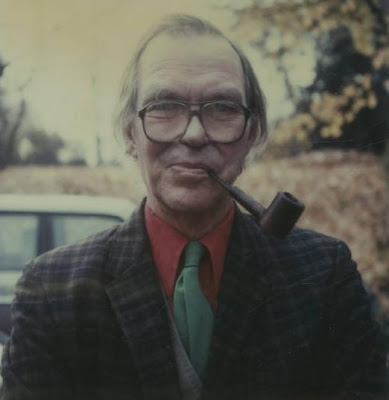 Paul Metcalf, writing about Charles Olson in a 1962 number of The Floating Bear (“it is history, and the archaic . . . / You see I can’t get away from the old measure of care / . . . wedded to the post-modern poetics, that provide the now! impact” and “he is pure New England, pure yank”), quotes, too, Henry David Thoreau (out of Walden), suggesting a Thoreau / Olson confederacy in mutual “antagonism to mu-sick”:

It is a ridiculous demand which England and America make, that you shall speak so that they can understand you. Neither men nor toadstools grow so.

Uncomprehending of Metcalf’s reading (or shorthand) here, I looked up the Thoreau. It continues:

As if that were important, and there were not enough to understand you without them. As if Nature could support but one order of understandings, could not sustain birds as well as quadrupeds, flying as well as creeping things, and hush and whoa, which Bright can understand, were the best English. As if there were safety in stupidity alone. I fear chiefly lest my expression may not be extra-vagant enough, may not wander far enough beyond the narrow limits of my daily experience, so as to be adequate to the truth of which I have been convinced. Extra vagance! it depends on how you are yarded. The migrating buffalo, which seeks new pastures in another latitude, is not extravagant like the cow which kicks over the pail, leaps the cowyard fence, and runs after her calf, in milking time. I desire to speak somewhere without bounds; like a man in a waking moment, to men in their waking moments; for I am convinced that I cannot exaggerate enough even to lay the foundation of a true expression. Who that has heard a strain of music feared then lest he should speak extravagantly any more forever? In view of the future or possible, we should live quite laxly and undefined in front, our outlines dim and misty on that side; as our shadows reveal an insensible perspiration toward the sun. The volatile truth of our words should continually betray the inadequacy of the residual statement. Their truth is instantly translated; its literal monument alone remains. The words which express our faith and piety are not definite; yet they are significant and fragrant like frankincense to superior natures.
Why level downward to our dullest perception always, and praise that as common sense? The commonest sense is the sense of men asleep, which they express by snoring.

A feral outburst, some of its lines known and previously noted. Though slippery in the fulsomeness of its own vagancy. If one connects wild musicking, its flights, to some higher “order of understandings,” one of a complexity uncowed by commonplaces like truth in simplicity—what to do with Thoreau’s “antagonism to mu-sick”? Isn’t Thoreau jockeying for a dialectical flutter—a vacillatory “both / and,” revelatory in denial—by saying “Who that has heard a strain of music feared then lest he should speak extravagantly any more forever?” (Similarly, the “volatile truth” of Thoreau’s sentence “The volatile truth of our words should continually betray the inadequacy of the residual statement” is one seemingly only with difficulty—and possibly wrongly—re-assembled out of the residuals of its self-betrayal, no? Like a terribly young wine whose only lasting tangibility—its “taste”—is experienced as a cold vapor on the tongue . . .)

Concomitantly, Metcalf’s two insistings out of Genoa (quoted in a piece called “Geography and Culture”):

In context, in Genoa, another re-assembling:

There being division, I am able to observe myself, to be at once within and without, and an exploration occurs, inwardly derived, over the surfaces, the topography of face and head, and downward over my body, I gain the sense of being different, of causing this difference in myself, of altering the outwardness of myself. I discover that flesh and muscle, perhaps even bone, and certainly cartilage, are potentially alterable, according as the plan is laid down. And the plan itself may shift and change: I may be this Michael or that, Stonecipher or Mills—Western Man or Indian, sea-dog or lubber, large-headed or small, living then or now; and even such outrageous fables as that of Ulysses’ men into swine become not unreasonable, when we understand that the men must have experienced some swinish designs within themselves, to which Circe had access . . .

(Melville: “I rejoice in my spine.”

Glancing again at the rafters, I think of my great-grandfather, who built this house with his own hands: Hammond Mills, a Yankee, born in New York City, who went upriver to Albany, and then west to Ohio and Indiana—a serious, hard-working man, whose favorite saying, his philosophy, perhaps, was handed down carefully from generation to generation, with the old furniture:

“The Mind is to the Body as the Whole Man is to the Earth.”

(and there is Melville, Mardi: “We have had
vast developments of parts of men: but none of
manly wholes.”

In “Geography and Culture” Metcalf connects the grit and tumble physiological sense precisely with Olson, compositional field made corporal field:

To me, one of the major reviving forces in modern poetry, beginning in the fifties, is the concept of the Physiology of the Poet as a field in which the poem is formed. To my knowledge, this began with Charles Olson, but he may have gotten it, perhaps unconsciously, from Herman Melville. Melville says somewhere, “I rejoice in my spine!”*—and in MARDI, he writes as follows:

Our brains should be round as globes; and planted on capacious chests, inhaling mighty morning-inspirations. We have had vast developments of parts of men; but none of manly wholes.

A man within himself upon an empty ground.
His head lay heavy on a huge right hand
itself a leopard on
his left and angled shoulder.
His back a stave, his side a hole into the bosom of a sphere.

His head passed down a sky (as suns the circle of the year).
His other shoulder, open side and thigh maintained,
by law of conservation of
the graveness of his center,
their clockwise fall.
Then he knew, so came to apogee
and earned and wore himself as amulet . . .

Knowing (a kind of wholeness) arrives out of extension (“apogee”—akin to Olson’s “I take SPACE to be the central fact to man born in America . . .”). Part, too, of the meaning of Thoreau’s “Extra vagance!” Or of what Metcalf calls (in a letter to Robert Buckeye partially reprinted in From Quarry Road: Uncollected Essays and Reviews of Paul Metcalf (2002) “the rigor of the writer’s efforts to stand clear.” Metcalf:

. . . to read the work of a really good writer . . . is as much as to enter a haunted house. It is unoccupied, doors and windows open, the space is public—but there is a spirit present, the intensity in direct proportion to the rigor of the writer’s efforts to stand clear.

(Which is why late MAXIMUS disappoints:
from the earlier, outside man, there
nothing left by the pathetic, deteriorating self)

Now, I consider that the phrenologists have omitted an important thing in not pushing their investigations from the cerebellum through the spinal canal. For I believe that much of a man’s character will be found betokened in his backbone. I would rather feel your spine than your skull, whoever you are. A thin joist of a spine never yet upheld a full and noble soul. I rejoice in my spine, as in the firm audacious staff of that flag which I fling half out to the world.