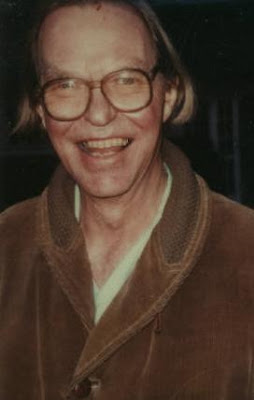 In a late piece printed in Conjunctions (1997), Metcalf writes of Ezra Pound under the rubric of “A Seereeyus Precursor” thus:

Over the long range of Ezra Pound’s productive years, his language and concerns evolved:

And then went down to the ship,
Set keel to breakers, forth on the godly sea, and
We set up mast and sail on that swart ship . . .

From these Homeric opening lines of the Cantos, he carries us through the Confucian Odes and into the modern age:

Disney against the metaphysicals

As Pound’s horizons expanded, it became apparent that in his conception of the poem, and subject only to the poem’s own internal discipline, anything might be included. Anything. This is the most significant lesson that I learned from Ezra Pound—a lesson learned when I was young, struggling to find my way, a lesson I was unable to use for many years—but a lesson learned.

More and more as the Cantos progressed, Pound pulled apart the curtain of the “creative” and quoted directly from sources.

At one point Pound referred to himself as “a seereeyus kerakter.” He was, above all, a man of action. When he and William Carlos Williams were students at the University of Pennsylvania they took up fencing. Williams realized one day, this man is serious—he means to kill me!

From one of Pound’s troubadour poems:

I have no life save when the swords clash.

A philosopher named Horace Rackham* wrote: “. . . the life of Action has no absolute value: it is not a part of, but only a means to, the End, which is the life of Thought.” Pound read this and made a marginal comment: “Nuts.”

In a letter to a friend: “Why the hell don’t you have a bit of real fun before you get tucked under?”

I never entertained Pound’s notion that by bringing ideas into the realm of politics, the course of history might be changed. I never, as Pound did, tried to get the ear of FDR. I never suffered, as Pound did, political failures. For me, going into action has meant cutting firewood. For Pound, it meant pounding the political typewriter: “I am held up, enraged by the delay needed to change the typing ribbon . . .”

His vision of misery:

No more do my shaftes fly
To slay. Nothing is now clean slayne
But rotteth away.

And, Metcalf’s kudos to Pound’s “magnificent ear”: “When I read through the Cantos, when the content becomes dense and obscure, unintelligible, I read on, let the impeccable speech rhythms carry me through, until the light filters up—which it always does.”

Metcalf’s “going into action has meant cutting firewood”—that insistence on corporeal doings with the physical world—recalls an exchange between John Burroughs and Walt Whitman in Metcalf’s The Players, a piece labeled “a documentary comedy-drama,” whose dramatis personae includes, too, the Detroit Tigers pitcher Mark “The Bird” Fidrych and American Major League Baseball umpire Ron Luciano. Metcalf’s note (preceding a list of sources): “all the words spoken in The Players were actually spoken or written by the characters to whom they are ascribed.” ** Thus:

BURROUGHS: No great poet ever appeared except from a race of good fighters, good eaters, good sleepers, good breeders.

BURROUGHS: We have swarms of little poetlings, producing swarms of soft and sickly little rhymelets.

WHITMAN: Human thought, poetry or melody, must have dim escapes and outlets—must possess a certain fluid, aerial character, akin to space itself.

BURROUGHS: Leaves of Grass requires a large perspective, you must not get your face too near the book.

WHITMAN: Most literary men, as you know, are the kind of men a hearty man would not go far to see.

BURROUGHS: Whitman was afraid of what he called “the beauty disease.”

WHITMAN: A literary class in America always strikes me with a laugh or with
nausea . . .

BURROUGHS: Most authors are parks, handsomely laid out and fenced in, with signs posted to KEEP OFF THE GRASS.

WHITMAN: Literary men learn so little from life—borrow so much from the borrowers.

BURROUGHS: It has been charged by an unfriendly critic that he strikes lower than the intellect.

Whitman’s “beauty disease” recalling William Carlos Williams’s own anathematizing, subsuming it within the full-brunt real—“‘beauty’ is related not to ‘loveliness’ but to a state in which reality plays a part.” One wonders what the un-slushing Burroughs would make of the aimlessness and slather of the current “age,” the nigh-unmitigated constancy of its ever-mediated assault, its further and further removals. Burroughs (in The Players):

I do not favor the typewriter. It would not do for me. The machine would get into the writing. They are part of our mechanical age and I hate ’em. Your writing will lose its freshness and individuality, if you compose on a machine. I can only think with a pen in my hand.

(Metcalf, in “The Eye Hears, the Voice Looks” (1984): “A handwritten manuscript is one thing; run up on the typewriter it is something organically different . . . the mode of presentation may fundamentally affect the substance of what is presented.”) And (Burroughs again):

The magazine writer has a new problem—how to address himself to the moving-picture brain—the brain that does not want to read or think, but only to use its eager shallow eyes—eyes that prefer the shadows and ghosts of people flitting around the stage than to see the real flesh and blood. How an audible dialogue would tire them—it might compel them to use their minds a little—horrible thought! For my own part, I am sure I cannot interest this moving-picture brain, and do not want to. It is the shallowest brain that has yet appeared in the world. What is to be the upshot of this craze over this mere wash of reality which the Movies (horrible word!) offer our young people?

Out of Burroughs’s journal, dated 9 November 1916 (though Metcalf leaves it undated, a piece in rhyme with the whole of its placement . . .)

** So one is stunned to learn of Whitman’s curiosity about the (changing) rules of baseball—“in base-ball is it the rule that the fellow pitching the ball aims to pitch it in such a way the batter cannot hit it? Gives it a twist—what not—so it slides off, or won’t be struck fairly?” And of Henry Ford’s presenting a car to naturalist and conservationist Burroughs—“In driving the car in the old barn, I get rattled and let it run wild; it bursts through the side of the barn like an explosion. There is a great splintering and rattling of boards and timbers, and the car stops with its forward axle hanging out over a drop of fifteen feet . . .”