A Short History of the Fragment 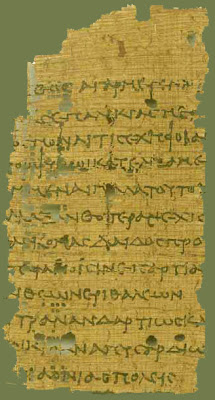 Reluctant Eliot with those “fragments . . . shored against . . . ruins”—pushed to it by Pound. Hugh Kenner, in a chapter (“The Muse in Tatters”) of The Pound Era, tracing a short history of the fragment, the modern onslaught seemingly to begin with scholar-salvaged bits (“thin scrapings . . . : single stanzas, . . . stray lines, stay phrases, single words, cited by Alexandrian commentators in passing illustration of meters, or of Aeolic forms”—here he’s talking of Sapphic pieces—“we know how she would have spelled the word for carbonate of soda”) tendered out of “masses of illegible papyrus scraps that came to Berlin from Egypt in 1896.” Swinburne’s approach to the fragment, along with countless others: “to dilate . . ., to reduplicate, to amplify, to prolong” with “cumbrousness of detail.” Kenner reports how one Sapphic fragment—the “tautly paced disclosure” “I loved you once, Atthis, long ago”—

Kenner, kindly, calls it a “champion expansion.” Swinburne is “never at a loss for more words.” Against that rhapsodic sumptuousness with its glut of rehash, its aesthetic hyperventilating, Kenner posits the Poundian approach: fragment comme “radiant gist.” Against any such stuffed and overweening aesthetic, any gussying up of the implicit, “an aesthetic of glimpses,” of ellipses rooted in the fragment’s own reticence, the ringing plausibility of its hints. (Kenner points to one source of such restraint in Walter Pater: “To such a tremulous wisp constantly reforming itself on the stream, to a single sharp impression, with a sense of it, a relic more or less fleeting, of such moments gone by, what is real in our lives fines itself down.”) An arrangement, then, of intensities—

(Kenner quotes Pound in 1950 saying: “Points define a periphery.” And, noting a sensibility that is constantly re-emergent, quotes Eliot speaking of Byron’s “imperceptiveness to the English word—so that he has to use a great many words before we become aware of him.”)

Reading all that, and thinking of the current use of the fragment, ubiquitous, largely untheorized (“as they say”), or copping to simple mimickry (“a broken way of attending calls for broken forms.”) The tendency is toward pure fragment, a undifferentiated slurry of brokenness, fragments to be churned through, used up, a glut of fragments. Look:

Words torn, unseen, unseemly, scene
some far suburb’s mall lot
Summer’s theme: this year’s humid
—to sweat is to know—
pen squeezed too tight yields
ink as blood or pus
so the phrase scraped, removed
offending thine eye: “Outsource Bush”
Against which, insource what? Who
will do it? Most terrible
predicate—high above mountains snow-capped
even in August in-flight motion
picture Eternal Sunshine of the
Spotless Mind infuriates many No
action, no funny, plot too
dense to follow, unless (unless!)
mind’s eye gives attention . . .

Out of Ron Silliman’s “Revelator.” No radiant gists in that wash—verbiage, broken and current, is all. A leveling occurs: “some far suburb’s mall lot” equals “to sweat is to know” equals “ink as blood or pus” equals “‘Outsource Bush.’” Not exactly “champion expansion”—but in a similar realm, hyper-attending to a pandemonium of bits makes its own dull rhapsody wherein naught shines. Or look:

and so on for an equal stretch, with all the fun of the cumulus, the humor (and implicit critique) in such pointed excess, and hence veering into

. . . denial of structured credit surveillance analysts, mockery of assurance managers and illness of disposition toward regulatory affairs consultants getting social housing means that you don’t really want communism, but you needn’t be ashamed only of that; your ear of shredded lichen is disproved din the kitchen salesroom, one made to resemble a mock kitchen, try it on as a polite form of fuck-up, down-payment or even for only the least, last or least lost scrap, no luck, shred or speck of kitchen, it is a good ear and has been licked but it will not pay for the annealed ultimate fragment of empty fridge or glossy glory spigot to glut on lately sublimed into a loss leader whose loss is implicitly infinite, in instalments, for in your defence it emerges that the kitchen was always and on purpose unsalable, whatever sort of incredibly weird noise you made in peace signs.

Out of Keston Sutherland’s “Ode to TL61P 3” in the new “Crisis Inquiry” issue of Damn the Caesars (Concilium Plebis: Richard Owens). Isn’t there a severe drain-off of attending (and ferocity) at the entry of the quasi-surreal “ear of shredded lichen” and its diminuendo into a frazzle of fragmentary dolings-out? (That precise intent is one likelihood: a new paragraph begins: “Since not a single song I made is comprehensible to you, I fear I must be too bourgeois or indigent to praise you . . .”) I can’t help but read Sean Bonney’s “Letter on Spectres” (dated: Saturday, August 20, 2011) as an indirect response to Sutherland (or, more precisely, to any claim to political efficacy in the distressed gamut—fragment to fragment—of experimental style that runs currently rampant (and unheeded). Bonney:

Yours was such an obvious bourgeois response. Pandemonium is suburbia, pure and simple. The rioters are speaking in perfect English. Its the middle-class, the magistrates, and you, who are all talking some weird, ignorant slang. All of your mouths are stitched up with some kind of weird gaffer tape. Your laboratory is a slum. Sorry. I don’t mean to be rude, but things have been pretty stressful. You know how it is when you read an account of a situation you’ve been directly involved in, but each one of its constituent parts has been extracted, polished, entirely rearranged?

And, at the end: “Each syllable is a different tonal cluster, penned in with police-wire and used electricity. I hear you’re thinking about becoming a bailiff. In any case, I’m glad they burnt your laboratory down. Now send me some fucking money.” Against the ubiquity of a poetics of fragments unleashed helter-skelter, consumed without pause, without particularity, without “gist”—“churned through” in unwholesome resemblance to capital and its endless “goods”—the “rioters are speaking in perfect English.” In arrangements, that is, of intensities, Pound-finicky holdouts against mere gush and glut.
Posted by John Latta at 7:20 AM