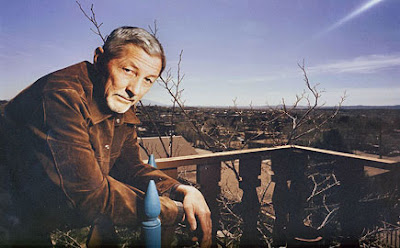 Up in the vin gris pre-dawn light, precariously reading:

We know that those things which most profoundly
and most permanently affect us
have come not out of deliberate calculation,
however intricate or stupefying to the brain,
but through labyrinths of feeling
whose multiple entrances tend to elude detection;
which only much later, if at all, can be admitted.
No man likes the deep purposes of his nature
held up to study.

Evan S. Connell, Jr.’s Notes from a Bottle Found on the Beach at Carmel (1962). Still. Needing grand dollops and swathes in order to ascertain its weal and movement. Proceeding:

I proceed without confidence;
I am sick with hesitation.

Yesterday someone mentioned animals
and things sensed in darkness, and told me
a man’s work should have the feel of a carving
in oak. If, he explained, it is meant to endure
and retain some characteristic meaningful
to future generations, it must at every cost
give evidence of the passage of time,
of meditation, and of skill in excess of mere
dexterous facility. Having said this he paused;
I supposed he had concluded. Then he said
an heraldic device is not easily chiseled.

And, with only a sere (dry-mouthed) surety intervening (“I know what I cannot prove, by reason or experiment”—a poetic in nuce), executing in pinched arabesque another story of man’s brute expediency, trifling and precise:

It was three minutes after ten, precisely,
when he was brought to us.
He seated himself, almost indolently,
and gazed above our heads
as though relieved the time had come!
We have discussed this privately,
remembering, first of all,
that he selected a lavish supper,
that he played at cards
and joked with the Jesuit,
and toward four o’clock in the morning
lay down on the simple bed and wept,
meanwhile looking blindly all around
and through the light we kept
burning by the Governor’s order.
It was then he fell asleep for the first time
in several days, and appeared to dream:
a curious expression played across his features.
And once he lifted up his hand, as though in greeting.
When he awoke and realized the hour
he seemed surprised, somehow embittered;
but then, glancing toward us
he smiled a trifle foolishly, and bent his head.
We have prayed for him, more than once. Now
who prays for us?

I do not think I soon will forget
how his hands drew suddenly up into fists, dancing
of their own accord across the polished oak arms
of the ponderous chair. I do not believe
I ever saw his face, concealed by his painted yellow
leather mask. Smoke was ascending from two holes
bored in the metal cap. For an instant
he tried to speak; and we have talked of this
between ourselves. We are of the opinion
he meant to tell us something. We think this may be so,
yet there are few things of which we can be sure.

The casually-made humility of the language, like Kafka’s. The way blunt uncertainty at the end blooms up grander than its occasion, to encircle all in its vacuity and distress. How the oak of the “ponderous chair” rhymes with the previous “carving / in oak . . . meant to endure,” merging with precipitant and shuddery irony. And here I think, too, “not out of deliberate calculation,” of Charles Olson’s assault against “the discrete” (and its troublesome discourse models—“classification . . . exposed as mere taxonomy; and logic . . . as loose and inaccurate a system as the body and soul had been, divided from each other and rattling, sticks in a stiff box.”) Or Olson’s asking: “What did happen to measure when the rigidities dissolved?” (“Equal, That Is, to the Real Itself,” 1958):

What is measure when the universe flips and no part is discrete from another part except by the flow of creation itself, in and out, intensive where it seemed before qualitative, and the extensive exactly the widest, which we also have the powers to include? Rhythm, suddenly, which had been so long the captive of meter, no matter how good . . . was a pumping of the real so constant art had to invent measure anew.

(Isn’t Connell, without grandiosity or fuss, simply proceeding, awash in the wash? See the Melvillean tale in Notes—

I mention at this point the log of the Yankee whaler
Monongahela, together with the testimony of
her captain, Jason Seabury, and of the men who sighted
and chased and struck with two harpoons
a plesiosaur that had survived from the Jurassic era.
These sailors measured the carcass,
finding it to be one hundred and three feet in length,
and seven inches; after which they stripped off
its meat and saved its oil, bring this to port
to sell, because they were practical men.
Numerous sermons could abide in this . . .

—and the subsequent remark, dour and longing, I suspect, for the outré and impractical: “I believe the sea is preparing specific revelations / for the benefit of Man, / who has forgotten the value of himself.” Connell, in an interview: “I think we’re all in a leaky boat.”)

Against which, precariously, with the circumspect wiles of a dodge, I lean a pertinent (I think) poem out of Marguerite Young’s Moderate Fable (1944):

That cloud might be called a barren cloud
If it presages, this April, no shaft of rain

But yet the truest love is in some aspects sterile,
The failing hypothesis of another mind.

As in a cage of glass, this world, we are
Matthew, Mark, Luke, John, diminished to a point almost bodiless,
Swarms of white ants, say, or experimental April snowflakes
To the star’s eye an implicit emptiness,

And by a supernal agency could be transferred
O, beyond our knowing it, unliteral canaries,
Their signature of flight on felt space,
Exchange of clouded futures and totality of memories,

And the jug flower buried to the lips,
Pin prick, hard jewel of consciousness,
Trespass like the peacock ambassador from God to man
Upon a highway erecting over chaos,

Thought substance for thought substance, like crown for crown,
An obligatory sequence of mortal history
Whereby Matthew now is Mark and Luke is John
And the personal pronoun attains a status in infinity,

Difference of persons but a specious truth
When within my skull the you becometh I
And another’s luna moth night-flying,

An argument destroying nature’s laws,
Yea, a fenceless world as worlds dissolve,
The unrealization of a fixed thing

Like the owl skimming over shallow flowers
Who voyage also from actual to a potential being,

Like April, which has its being only in a name.

For brightens uncertainty of self as self,

And in this confusion is our only existence possible.