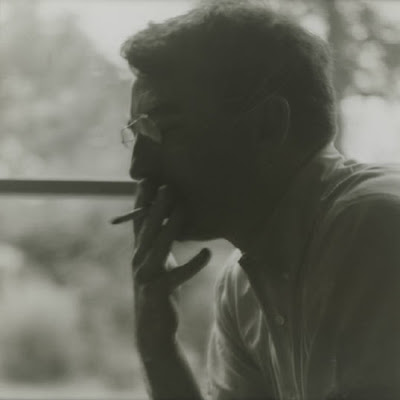 Guy Davenport, out of “A Stereopticon” (being a review of Nabokov’s Blues: The Scientific Odyssey of a Literary Genius and Nabokov’s Butterflies: Unpublished and Uncollected Writings):

There are butterflies in Egyptian frescoes (eyed by a tabby cat climbing through reeds). Dutch still lifes are rich in butterflies. There’s a Red Admirable (not Admiral, as Nabokov was forever correcting this misnomer) smack in the center of Seurat’s Sunday on La Grande Jatte, and a fritillary (it looks like) dead center in Tchelitchev’s Cache-Cache. Shakespeare knew his butterflies (six images, all focused on their beauty). Keats’s “fly” is a butterfly. Whistler used one for a monogram. The Bible mentions only the butterfly’s cousin, the moth.

Out of Davenport’s story “The Haile Selassie Funeral Train”:

Moths quivered on the dusty panes, Mamestras, Eucalypteras, Antiblemmas. And O! the gardens we could see beyond walls and fences. Outside Barcelona, as in a dream, we saw La Belle Jardinière herself, with her doves and wasps, her sure signs in full view among the flowers: her bennu tall on its blue legs, her crown of butterflies, her buckle of red jasper, her lovely hair. She was busy beside a sycamore, pulling water out in threads.

Out of Erik Anderson-Reece’s A Balance of Quinces: The Paintings and Drawings of Guy Davenport (1996):

In a collage from Apples and Pears, Mondrian’s perpendicular lines compartmentalize a perfectly balanced three tiered composite. Each image is a symbol of productivity and attraction in either nature or culture: the playfully phallic pear at the top right is the seductive shell of the seed, the coin at the bottom left is an emblem of desire and production . . . The fish . . . one of D’Arcy Thompson’s favorite examples of how nature-as-artist always knows what it’s doing, however aberrant the form may appear. The butterfly is nature’s most realized emblem of symmetry and metamorphosis. In Davenport’s gridded composite, the “natural” and the “cultural” are balanced, as pear, butterfly, and fish are contrasted with erotic and economic “fetishes”—a pair of boy’s briefs and a coin. The coin is society’s seed. Underwear is the seed’s seducing flower. Nature and culture need not be antagonists. Fetishes are healthy symbols until we metonymically mistake them for our real desires.

Out of “The Hunter Gracchus”:

Gracchus explains to the mayor of Riva that he is always in motion, despite his lying as still as a corpse. On the great stair “infinitely wide and spacious” that leads to “the other world” he clambers up and down, sideways to the left, sideways to the right, “always in motion.” He says that he is a hunter turned into a butterfly. There is a gate (presumably heaven) toward which he flutters, but when he gets near he wakes to find himself back on his bier in the cabin of his ship, “still stranded forlornly in some earthly sea or other.” The motion is in his mind (his psyche, Greek for “butterfly” as well as for “soul”). These imaginings (or dreams) are a mockery of his former nimbleness as a hunter. The butterfly is one of the most dramatic of metamorphic creatures, its transformations seemingly more divergent than any other. A caterpillar does not die; it becomes a wholly different being. . . .

For is not a house a still animal, needing a soul? What man touches God has first touched. A man's seed is yala, the baby in the womb is tonu, the baby is born when it has become toy. So with seed, plant, and fruit. Nit, caterpillar, butterfly.

Out of “A Field of Snow on a Slope of the Rosenberg”:

I was at Waldau before I came here, into the silence. And before that—look at the rabbit standing on its hind legs!—I was variously a student, a bank clerk, an actor, a poet, a sign painter, a soldier—I have seen those white butterflies as thick as snow over clover—an insurance salesman, a waiter, a vendor of puppets, a bill sticker, a janitor, a traveling salesman for a manufacturer of prosthetic limbs, a novelist, a butler, an archivist for the canton of Bern, and a distributor of temperance tracts. . . .

Out of “C. Musonius Rufus”:

A man rots when the child in him dies.
The genius philosophers urge us to heed is but a grasp of one’s childhood, any moment of which unrelinquished to the demons of time is sufficient to keep the god Apollo near enough, near enough. One touch of virginity can sweeten the sourest vinegar of a ravaged soul, one touch of liberty still green, one unforgotten chill at looking at a moth on the back of the hand. Savage folly in a turm of white butterflies, a quitch shot with crickets, hide and seek in the barley awns!

Out of “The Antiquities of Elis”:

We had an onion and some hot wine with sage in it at Herakleia, and looked at the sanctuary of the nymphs, scaring a heron as we approached. I admired the butterflies and lizards, Pyttalos found a trefoil which he picked, and we moved on toward Letrini.

Tatlin rattled the sifter of his porcelain stove, turned the damper up, pulled on his heavy brown sweater, settled down by the tall window against which snow was boiling like an insubstantial surf, a sea of weightless hexagonal crystals blown from Finland, snyeg, always snyeg, and opened his Leskov to The Tale of the Cross-Eyed, Left-Handed Gunsmith from Tula and the Steel Flea, imagined the museums of England with their cast-iron-strutted plate-glass ceilings allowing pink sunlight to fall together with the delicate shadows of nightingales upon Mr. Babbage’s brass-and-walnut calculator, cases of minerals, butterflies, samurai swords, Islamic coins, tertiary fossils, Merovingian bees, T’ang horses, Andaman wicker shields, and the tanned and stuffed corpse of Jeremy Bentham in its wide-awake hat, stock and alpaca coat. Snyeg, always snyeg.

Out of “The Owl of Minerva”:

Lunch is in my backpack, supper in yours.
—Word has gone around among the butterflies that we’re here.
—Who have told the mosquitoes and gnats.
—It’s their place. We’re intruders.
—No we’re not. We’re going to fit in. Everything’s a matter of learning how to belong. Two specks of brint and one of ilt join up to be water. And way up in the clouds goes in for being hexagonal crystals.

—I saw you wandering off, a thing you do, to pee or get a better look at a butterfly, and you saw this house and said absolutely fucking nothing about it.
—Right.

Behind him arrived an older boy in a beret and red briefs, a mop-haired spadger in sneakers and shorts, carrying a butterfly net, and their scoutmaster, who seemed nineteenish, sturdily athletic, with cropped blond hair and smiling green eyes.

We’re from Tarm, Sven Berkholst said. We’re out for butterflies, and some elementary marine biology around the shore. Nice meeting you, and we’ll push off. Troop, about-face. I’ll keep the boys away from up here.

Out of “The Bicycle Rider”:

They could see through the grime of the barnloft windows, Anders and Kim, how far the field of sunflowers they’d walked across stretched down to where the sawgrass begins back of the beach, sunflowers higher than their heads, bitter green and dusty to smell. They could see yellow finches working the panniers, butterflies dipping and fluttering, the glitter and lilac blue of the sea where they’d been horsing around on the sand.

Stitch of bronze midges over daisies, bees working wild hyacinths, butterflies yellow and white nuzzling clover at the meadow’s edge, Kim and Anders glistening wet rolled their shoulders and stretched like limbering gymnasts to dry in the hot light and sweet air from the river.

Out of “That Faire Field of Enna”:

The completed painting depicts a girl standing with her face to the tree, the It of Hide and Seek. Stand back, and her body makes the face of a winking demon: a butterfly near her right arm serves for his left eye; her left arm, his half-crossed right eye. Her dress is his nose, her legs his Viking moustache.

Out of “Ishmael’s Double”:

Queequeg was neither “caterpillar nor butterfly,” neither civilized not primitive.

Out of “The Cardiff Team”:

—One of the things I learned at your age was that finding out about what’s in books and the world and feeling great in my pants were cooperative. I though it was just me, the way I was. Mind and body are alive together. And here we are with the ants, midges, and ground spiders.
—Grasshoppers and butterflies.
—The sun is delicious. A warmth with kindness in it.
—I like this. It’s now and it’s books and paintings.