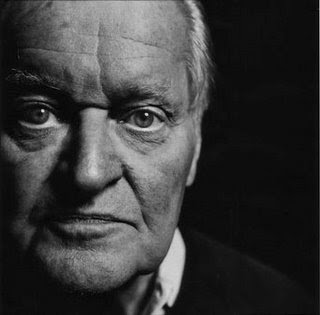 Hugh Kenner, in The Pound Era (1971), going Jamesian in a decoding of how James’s own “geomancer’s response to impalpabilities—tones and airs, surfaces and absences— inaugurated a poetic of the mute . . ., a poetic of eschewals and refrainings, working round the margins of a voiceless theme, a theme voiceless because not yet public, not yet specified, not resolved by its apperceivers to agent, action, acted-upon. That one cannot say, or else may not blatantly say, just who did what to whom, is the premise of the kind of situation that fascinates him.” Claiming, rightly: “James’s effort to articulate such matters within the shape of a formal English sentence yielded the famous late style, where subject and verb are ‘there’ but don’t carry the burden of what is said.” (A chapter later Kenner reports James—“even in his Notebooks”—“flushed with orgies of reticence”—a lovely phrase, feverishly filling every hole it empties itself into—“divulging even to himself no more than he must know to get on with the job.”) All of which made me think of Ashbery. Ashbery’s own Jamesian coding of impalpabilities, his own balance of fraught (burgeoning) eschewals. A debt to James so suddenly (seemingly) obvious I wonder if I ain’t suckering for a gaffe. A sentence out of Ashbery’s “The System”:

. . . so blind are we to the true nature of reality at any given moment that this chaos—bathed, it is true, in the iridescent hues of the rainbow and clothed in an endless confusion of fair and variegated forms which did their best to stifle any burgeoning notions of the formlessness of the whole, the muddle really as ugly as sin, which at every moment shone through the colored masses, bringing a telltale finger squarely down on the addition line, beneath which these self-important and self-convoluted shapes added disconcertingly up to zero—this chaos began to seem like the normal way of being, so that some time later even very sensitive and perceptive souls had been taken in: it was for them life’s rolling river, with its calm eddies and shallows as well as its more swiftly moving parts and ahead of these the rapids, with an awful roar somewhere in the distance; and yet, or so it seemed to these more sensible than average folk, a certain amount of hardship has to be accepted if we want the river-journey to continue; life cannot be a series of totally pleasant events, and we must accept the bad if we also wish the good; indeed a certain amount of evil is necessary to set it in proper relief: how could we know the good without some experience of its opposite?

Kenner, writing of the Jamesian voice “that pursued so many refusals and eschewals, and built so magisterially suspensions and resolutions out of things only half-named, only present by way of analogy” might, too, have pointed to such a chaos, its disconcerting additions, its sum. James, “The Future of the Novel”:

. . . as regards the tangible type, the end is that in its undefended, its positively exposed state, we continue to accept it, conscious even of a peculiar beauty in an appeal made from a footing so precarious. It throws itself wholly on our generosity, and very often indeed gives us, by the reception it meets, a useful measure of the quality, of the delicacy, of many minds. There is to my sense no work of literary, or of any other, art, that any human being is under the smallest positive obligation to “like.”

There only remain infatuations that we envy and emulate. When we do respond to the appeal, when we are caught in the trap, we are held and played upon; so that how in the world can there not still be a future, however late in the day, for a contrivance possessed of this precious secret? The more we consider it the more we feel that the prose picture can never be at the end of its tether until it loses the sense of what it can do. It can do simply everything, and that is its strength and its life. Its plasticity, its elasticity are infinite . . .

“It can do simply everything”: I find that completely brash and thrilling. Out of, notably, inextricably, the necessary loss of “the sense of what it can do.” Ashbery at the upshot end of “The System” (beginning, “The system was breaking down”): “this incommensurably wide way leads to the pragmatic and kinetic future.” Kenner quotes, too, James’s percept in The American Scene (1907) of America with its “air of unmitigated publicity, publicity as a condition, as a doom” and how “nothing, accordingly, no image, no presumption of constituted relations, possibilities, amenities, in the social, the domestic order, was inwardly projected.” Recalling, inevitably, Ashbery’s product-glut—“a mint-condition can / Of Rumford’s Baking Powder, a celluloid earring, Speedy / Gonzales, the latest from Helen Topping Miller’s fertile / Escritoire, a sheaf of suggestive pix on greige, deckle-edged / Stock . . .” out of “Daffy Duck in Hollywood”—and surface-insistence--see, say, “Self-Portrait in a Convex Mirror”—opening with that constant “swerving easily away, as though to protect / What it advertises.” And, later:

But your eyes proclaim
That everything is surface. The surface is what’s there
And nothing can exist except what’s there.
There are no recesses in the room, only alcoves . . .