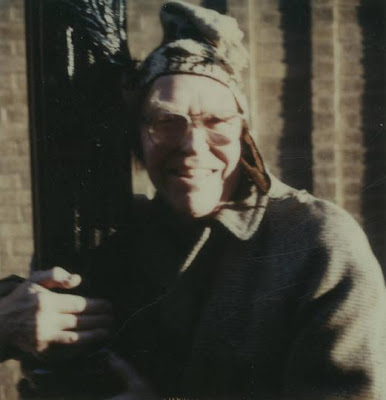 Paul Metcalf, out of Golden Delicious (1985). A list of “the things they carried”—gear and excess jettisoned off the Conestoga wagons, there in the Missouri jump-off terrain, and all along the way. Result of scouring the California Gold Rush archives. An era, a people known by what it possesses* (or is forced to shuck):

We find we have twice as much of everything as we can carry . . . Hardly a company has left here but that had too heavy a load & every train before travelling 50 miles throw away quantities of provisions & articles not absolutely necessary.       Ham, flour, pilot bread, Beans, sheet iron stoves extra axletrees & wheels, medicines       Tools of all kinds       lead crucibles, gold washers       The road and plain is strewn with them, hats, coats, boots, old iron, powder, balls, lead, boxes, trunks, valises, salt, bacon flour       barrels of bread, six dozen steel shovels       a complete outfit for a sawmill       brooms and brushes, ox shoes and horse shoes, lasts and leather, jumping jacks and jewsharps, rings and bracelets, pocket mirrors and pocketbooks, calico vests and boiled shirts       a boat       anvils, feather beds, rocking chairs, overboard goes everything.       Rifles are thrown by the dozen into the river and worthless white beans almost cover the ground.       a diving bell       some wooden buckets, and all our pickles       towels, gowns and hairpins       There is more clothing on the ground . . . than would fill the largest store in Boston.       and green bonnets enough to build a foot bridge across a creek.       meet and flower       good geese feathers in heaps       old clothes boots provisions, particularly beans       King Bolts, Crow Bars, Picket pins       spools, soap, scythes       a great walnut bedstead       The bacon was piled like cordwood, and some of the men poured turpentine on the provisions and set fire to them, so the Indians couldn't eat them.       sugar on which turpentine has been poured, flour in which salt and dirt had been thrown, and wagons broken to pieces, or partially burned, clothes torn to pieces       A few hundred yards from my camp I saw an object, which reaching, proved to be a very handsome and new Gothic bookcase! It was soon dismembered to boil our coffee.       Costly trunks torn to pieces.       2 large kegs of gun-powder, which we put in a wolf-hole, on a hill, close by, and blew up.       A Dutchman here, was discarding some tools, which he could carry no further: and was busy breaking saws, &c. over a stump. “Day cosht me plenty of money, in St. Louis, and nopoty shall have the goot of dem, by Got!” a general destruction and devastation appeard to take Place       I have never seen before in no place, such destruction of property
Saw a fine sheet iron stove sitting beside the road, took it along cooked in it that night, & then left it       Found an old stove and baked some bread.       great piles of bacon and flour, piled higher than my head, a notice on every pile “This is clean: help yourself”
an old man would pick up all the old iron lying along the road even to old iron tires which he would bind up with his immense strength and throw in the wagon telling his companions that it would come in good play later on. And his companions, later on, when the old man was not observing, would throw them out again.
a fair-sized library       books of every sort and size from Fanny Hill to the Bible.       law books, novels       Several Law Libraries
Lying by the way-side, are a great variety of books. . . . From this extended library I frequently draw a volume, read and return it.       an escritoire of rare workmanship       Huge piles Bacon are fired & affords a fine light

Wild flowers are scattered over the prairie beautifully . . .

Thence to the botany of the endroit (“the odor arising from them delightful to ones allfactorys”). Warring lists making the rapaciousness of the assault of the West apparent (“Pshaw!—enraptur’d with a landscape!—how ridiculous!” interjected into the list of grasses and wildflowers to mark the jocular ruse and human sweep . . .) I love the authentic press of borrowed diction out of diaries and letters, malleable orthography (“crawsing the Caw River the bote sunck with one family, tho all ways save . . . After a bad Knight, we went 5 miles for brec forst”), the way it makes the word tangible and mutable, a thing jumping in the mouth. (I note that Metcalf the tool-busting Dutchman. In the original, probably found by Metcalf in Gold Rush: the Journals, Drawings, and Other Papers of J. Goldsborough Bruff, Captain, Washington City and California Mining Association, April 2, 1849-July 20, 1851 (1949), the line reads: “Dey cosht me plendy of money, in St Louis, and nopoty shall have de goot of dem, py Got!” Dutch-inflected speech maintaining noises long-changed in English by the Great Consonant Shift . . .)

* Tim O’Brien defines an era and a milieu thus, too—particularly in the story “The Things They Carried” (1986):

They carried the standard fatigue jackets and trousers. Very few carried underwear. On their feet they carried jungle boots—2.1 pounds—and Dave Jensen carried three pairs of socks and a can of Dr. Scholl’s foot powder as a precaution against trench foot. Until he was shot, Ted Lavender carried six or seven ounces of premium dope, which for him was a necessity. Mitchell Sanders, the RTO, carried condoms. Norman Bowker carried a diary. Rat Kiley carried comic books. Kiowa, a devout Baptist, carried an illustrated New Testament that had been presented to him by his father, who taught Sunday school in Oklahoma City, Oklahoma. As a hedge against bad times, however, Kiowa also carried his grandmother’s distrust of the white man, his grandfather’s old hunting hatchet. Necessity dictated. Because the land was mined and booby-trapped, it was SOP for each man to carry a steel-centered, nylon-covered flak jacket, which weighed 6.7 pounds, but which on hot days seemed much heavier. Because you could die so quickly, each man carried at least one large compress bandage, usually in the helmet band for easy access.