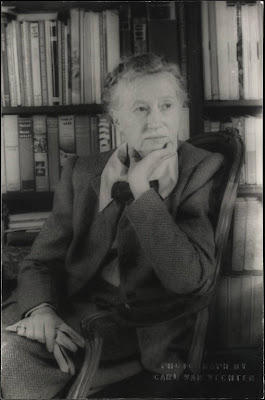 November 24, 1941
Dear Daughtry:
Many thanks for the persimmons. These meant more to me than you can imagine. I have far more things to eat and far more things to drink than are good for me. I indulge in abstemious spells merely to keep my balance.
Wild persimmons make one feel like a hungry man in the woods. As I ate them, I thought of opossums and birds, and the antique Japanese prints in black and white, in which monkeys are eating persimmons in bare trees. There is nothing more desolate than a persimmon tree, with the old ripe fruit hanging on it. As you see, there is such a thing as being a spiritual epicure.
Yours,
Wallace Stevens

William Carlos Williams, who emphatically plugged one critical interpretation of it (Parker Tyler’s in a 1946 Briarcliff Quarterly piece)—that “the plums’ ‘death’ (or formal disappearance and disintegration) was symbolically anticipated in the icy charm of their living flesh”—calling it “just nonsense!”:

This Is Just to Say

I have eaten
the plums
that were in
the icebox

and which
you were probably
saving
for breakfast

Forgive me
they were delicious
so sweet
and so cold

Williams’s statement (under the title “Why He Selected Some Flower Studies”) for the 1942 Whit Burnett-edited This Is My Best (a.k.a. the cumbersomely titled, America's 93 Greatest Living Authors Present This Is My Best: Over 150 Self-Chosen and Complete Masterpieces, Together With Their Reasons For Their Selections):

The thing has been with me to work the language in order to find what new may be done with it. Not merely does one chase after newness for the sake of sensation or abandon the old because it is stale. There is a necessity to reinvestigate our means of expression in every age. For in the forms of the arts many things get locked up, some of them permanent and invaluable and some of them stultifying if allowed to remain fixed. Unless every age claims the world for its own and makes it so by its own efforts in its own day and unless the mark of this effort and success is left upon all the forms of that age including those formal expressions which we call art, no one can be said to have lived in any age or at any time. These pieces show my own efforts to possess my world thought which, when successful, the life of my day has breathed whatever value they have into them.

Signed and dated “Rutherford, N. J. / June 14, 1942.” Is that “no one can be said to have lived in any age or at any time” Williams’s echo of Thoreau’s stunning and ever-admonitory “I went to the woods because I wished to live deliberately, to front only the essential facts of life, and see if I could not learn what it had to teach, and not, when I came to die, discover that I had not lived”? Williams’s “Flower Studies”: “Daisy,” “Primrose,” and “Queen-Anne’s-Lace”—all dated c. 1919. Here’s “Primrose” with its reprise chorus of “yellow” (cleansed of “the stain of love” it’d carried in the earlier “Love Song (I lie here thinking of you)”):

Yellow, yellow, yellow, yellow!
It is not a color.
It is summer!
It is the wind on a willow,
the lap of waves, the shadow
under a bush, a bird, a bluebird,
three herons, a dead hawk
rotting on a pole—
Clear yellow!
It is a piece of blue paper
in the grass or a threecluster of
green walnuts swaying, children
playing croquet or one boy
fishing, a man
swinging his pink fists
as he walks—
It is ladysthumb, forget-me-nots
in the ditch, moss under
the flange of the carrail, the
wavy lines in split rock, a
great oaktree—
It is a disinclination to be
five red petals or a rose, it is
a cluster of birdsbreast flowers
on a red stem six feet high,
four open yellow petals
above sepals curled
backward into reverse spikes—
Tufts of purple grass spot the
green meadows and clouds the sky.

About “Primrose” at some point in the late ’fifties Williams commented to John Thirlwall: “Close observation—trying to sum up what I saw. A true imagistic poem. Written at the shore in Connecticut.”

Adjacent to Williams in This Is My Best is Marianne Moore’s statement (“Why She Selected What Are Years?”):

“What Are Years?” partly written in 1931 and finished in 1939, is elegiac.
The desperation attendant on mortal fallibility is mitigated for me by admitting that the most willed and resolute vigilance may lapse, as with the Apostle Peter’s denial that he could be capable of denial; but that failure, disgrace, and even death have now and again been redeemed into inviolateness by a sufficiently transfigured courage.

Signed and dated “Brooklyn, N. Y. / March 22, 1942.” The audacity of Moore’s own clipped and inviolate clarity (and so rhythmically limned!)—what a sustaining thing against the era’s dull muttering.

What is our innocence,
what is our guilt ? All are
naked, none is safe. And whence
is courage: the unanswered question,
the resolute doubt,—
dumbly calling, deafly listening—that
in misfortune, even death,
encourages others
and in its defeat, stirs

the soul to be strong? He
sees deep and is glad, who
accedes to mortality
and in his imprisonment, rises
upon himself as
the sea in a chasm, struggling to be
free and unable to be,
in its surrendering
finds its continuing.

So he who strongly feels,
behaves. The very bird,
grown taller as he sings, steels
his form straight up. Though he is captive,
his mighty singing
says, satisfaction is a lowly
thing, how pure a thing is joy.
This is mortality,
this is eternity.

To say “he who strongly feels, / behaves” is, likely, to reject any need for the “balance” gained by short “abstemious spells.”