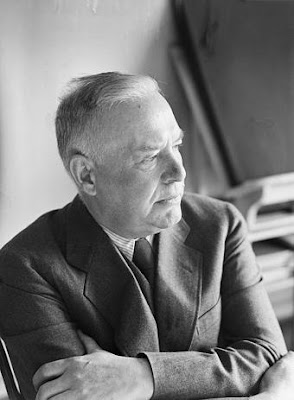 To dawdle unhampered at the task. To fob off propinquities, little mannerisms of the morning walk under the colossal vault of dun-rinsed sky. Morning’s usual outbursts mimicking the crows’ collapse into aimless harangue, and for what? Grit and continue. I liked (browsing, unencumbered, fretless) seeing—in a 26 November 1935 letter to Ronald Lane Latimer—Wallace Stevens’s glad ambush of premonitory freedom:

I suppose that the explanation for the bursts of freedom is nothing more than this: that when one is thinking one’s way the pattern becomes small and complex, but when one has reached a point and finds it possible to move emotionally one goes ahead rapidly. One of the most difficult things in writing poetry is to know what one’s subject is. Most people know what it is and do not write poetry, because they are so conscious of that one thing. One’s subject is always poetry, or should be. But sometimes it becomes a little more definite and fluid, and then the thing goes ahead rapidly.

The usual permit to sail without anchorage about the whole oceanic stint and continuum (blue sail, salmon-colored ocean), a privateer to indifference, a brigand untainted, untempered. Somewhere in Stevens’s The Necessary Angel he writes of the imagination, that “irrepressible revolutionist”: “nothing is more certain than that the imagination is agreeable to the imagination.” A sort of lofty obverse to the janitorial adage that “dirt breeds dirt.” The Newtonian ongoingness of such movement (“to move emotionally” being one definition of “to imagine”): “Every body persists in its state of being at rest or of moving uniformly straight forward, except insofar as it is compelled to change its state by force impressed.” For Stevens, the “force impressed” is the real. Out of a letter to José Rodríguez Feo (20 June 1945):

Reality is the great fond, and it is because it is that the purely literary amounts to so little. Moreover, in the world of actuality . . . one is always living a little out of it. There is a precious sentence in Henry James, for whom everyday life was not much more than the mere business of living, but, all the same, he separated himself from it. The sentence is . . .

“To live in the world of creation—to get into it and stay in it—to frequent it and haunt it—to think intensely and fruitfully—to woo combinations and inspirations into being by a depth and continuity of attention and meditation—this is the only thing.”

“Precious” or not, Stevens’s own next sentence rather drably reports how he is “going to Cambridge next week to read . . .” Isn’t it that Stevens’s compulsive vacillating between “what is real and what is not” allows for a making as apprehending? (I am thinking of lines in “An Ordinary Evening in New Haven”: “The enigmatical / Beauty of each beautiful enigma / Becomes amassed in a total double-thing. / We do not know what is real and what is not.”) And here again, in the fond-homage of perpetual return (meaning equally perpetual departure):

We keep coming back and coming back
To the real: to the hotel instead of the hymns
That fall upon it out of the wind. We seek

The poem of pure reality, untouched
By trope or deviation, straight to the word,
Straight to the transfixing object, to the object

At the exactest point at which it is itself,
Transfixing by being purely what it is,
A view of New Haven, say, through the certain eye,

The eye made clear of uncertainty, with the sight
Of simple seeing, without reflection. We seek
Nothing beyond reality. Within it,

Everything, the spirit’s alchemicana
Included, the spirit that goes roundabout
And through included, not merely the visible,

The solid, but the movable, the moment,
The coming on of feasts and the habits of saints,
The pattern of the heavens and high, night air.

That veering off—out of “Nothing beyond” and up towards “Everything . . . movable” ending in “high, night air” (a place seemingly both pure and immensely populous) isn’t that precisely the work of “the spirit’s alchemicana” (read: “the imagination”—the job of alchemy being transmutatory, “to woo combinations.”)