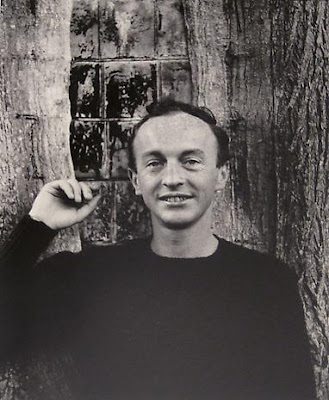 Still fossicking the O’Hara bibliography. To Barbara Guest, poetry editor of Partisan Review, who’d recently accepted “Ode to Joy”—with its plaintive refrain “No more dying” and its extended argument for the sheer imaginary excess “that love may live”—

. . . I traded Mike Goldberg three poems for a painting-on-paper (“Ode to Joy,” “Ode on Lust,” and “Ode on Necrophilia”) with the agreement that he owned the originals just as I own the painting, and if one were printed it would be acknowledged, just as if I loaned the painting. Can we acknowledge this without seeming silly? . . . If the painting were borrowed by an institution similar to PR, say [the Museum of Modern Art], it would be “Lent by Frank O’Hara, NY, NY.” What could we use for the poem? “Courtesy of Michael Goldberg”? . . . It becomes quite laughable, doesn’t it? But I think it is a nice thing for us poets that someone recognize a poem’s tangibility in terms of value and would like to do it if we can. Perhaps we will some day see the chance to walk into Sidney Janis with a long poem and say, “Here you are Sidney, 550 lines and I’ll take Gorky’s The Calendars” . . . Anyhow, Larry [Rivers] (whose original idea it was) has also traded me a drawing for two poems, so we may as well get it set now. I’m quite a horse-trader, eh?

(Three years later Gorky’s The Calendars, owned by Nelson Rockefeller, is destroyed by fire in the Executive Mansion at Albany.)

One of her strengths is this very ability to risk everything on inspiration, but one feels that the work is judged afterward by a very keen and even erudite intelligence. Headlong as her moments of creation would appear to be, one also senses behind the apparent disregard for the “look” of anyone else’s painting a profound awareness of pertinent elements (to absorb or to avoid) . . .

And talk of “whether to ‘make the picture’ or ‘let it happen’”: “Each has its pitfall, the one dry formalism, the other a complete mess. I do not know that one area of risk is greater than another, and doubtless the strong temperament finds that no decision can be made . . .” Which sounds like O’Hara’s own headlong and stymied vacillatory frieze: “I am guarding it from mess and measure.” Turns out O’Hara’s writing the Frankenthaler piece with difficulty, puts it off and writes “Hôtel Transylvanie”—dated 12 December 1959, and, incredibly enough, included in Donald Allen’s The New American Poetry 1945–1960 (indicating the unsettled pitch and flux of that volume’s contents)—sending it, too, along to Frankenthaler in a letter dated 18 December 1959: “Here is a footnote to your catalog—I wrote it out of frustration at not being able to get on with the piece about you, while listening to Manon, too . . . Most of it comes from the gambling scene in the 4th act (and apparently a few other things on my mind too) . . .” Isn’t some of O’Hara’s thinking about Frankenthaler leaking into “Hôtel Transylvanie” itself?

you will always live in a jealous society of accident
you will never know how beautiful you are or how beautiful
the other is, you will continue to refuse to die for yourself
and they will know as they listen with excessive pleasure that you’re dead
and they will not mind that they have let you entertain
at the expense of the only thing you want in the world/you are amusing
as a game is amusing when someone is forced to lose as in a game I must

Summarily diffident, “lyrical to a fault.” O’Hara in “the throes of certainty” (to attempt a figure oxymoronickal and sharp). See: “you know that I am not here to fool around, that I must win or die / I expect you to do everything because it is of no consequence . . .” Or the fierce jocularity of the ending:

The odd double-barrelled zeugma of “what and why I am and made to happen”—being becoming fate by means of sheer syntax.

. . . suppose I drop the “Outbreak” in the title, which I found rather melodramatic and which tends to make the gentleness of the closing anticlimactic and call it “In Favor of One’s Own Time,” or should it be simply “In Favor of One’s Time”? I tend to like One’s for some reason, but am often wrong—as you remember, Kenneth [Koch] had to talk me out of Meditations on an Emergency and into Meditations in an Emergency. Then further: suppose I make the last line [“]and we live outside his garden in pure tempestuous rights[”] or and [same line, without “his garden.”] I like the latter less perhaps, because it is Marvell’s we are living outside and hence the poem is in favor of our own time rather than his, nicher? (as Hans Hofmann says). Or do you think the whole idea of keeping Marvell’s garden in that poem is too conceited even though it is what gave me the lines in question?

Repeating info retrievable out of the “Notes” in O’Hara’s Collected. Though, oddly, Allen quotes the Koch editorial line verbatim, identifying its source as “FOH to John Ashbery, February 1, 1961.” That O’Hara repeated the story: not impossible, not likely. (One recalls—deflatedly—how the piece originally carried the title “Meditations on Re-emergent Occasions.”) O’Hara’s “marvellous” poem:

In Favor of One’s Time

an angel flying slowly, curiously singes its wings
and you diminish for a moment out of respect
for beauty then flare up after all that’s the angel
that wrestled with Jacob and loves conflict
as an athlete loves the tape, and we’re off into
an immortal contest of actuality and pride
which is love assuming the consciousness of itself
as sky over all, medium of finding and founding
not just resemblance but the magnetic otherness
that that that stands erect in the spirit’s glare
and waits for the joining of an opposite force’s breath

so come the winds into our lives and last
longer than despair’s sharp snake, crushed before it conquered
so marvellous is not just a poet’s greenish namesake
and we live outside his garden in our tempestuous rights

O’Hara’s undaunted “thrust”: “however exaggerated at least something’s going on.” Marvell’s “The Garden” begins: “How vainly men themselves amaze / To win the palm . . .” (O’Hara’s “athlete loves the tape”) and sees, too, how “The gods who mortal beauty chase, / Still in a tree did end their race.” O’Hara’s full tilt “tempestuous” refusal of the mind’s sere reductions (Marvell’s “Annihilating all that’s made / To a green thought in a green shade”), every force conjoined / opposed by its windy counterforce. 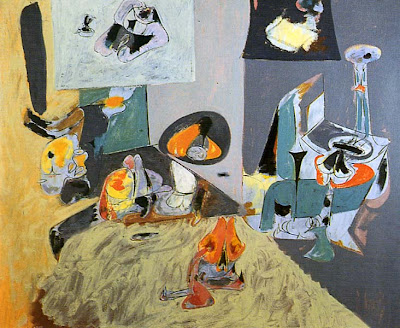