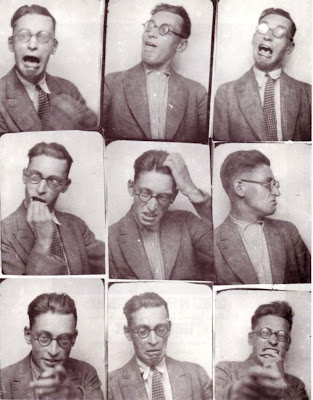 In DISILLUSION, perhaps the word ronds would be better than cercles. As I understand it, the use of pois, especially in connection with painting: a pois, means spots, dabs. But what I had in mind was something bizarre. Personally, I like words to sound wrong. Of course, I have not an ear for that sort of thing in French. If cercles is permissible, I should rather use it, because there is something tame about ronds. Perhaps it is not possible to transpose a feeling for words from one language to another. I think I can illustrate this in THE EMPEROR: In the third line, Des laits libidineux, if good French, carries over the feeling of concupiscent curds far better than Des crèmes délectables. Moreover, while gamines may be the better word, isn’t souillons a good deal more forcible?
In the second verse of THE EMPEROR, the word fantails does not mean fans, but fantail pigeons, so that motifs en évantail should be motifs en pigeon-paon. Going back to the first verse, the true sense of Let be be the finale of seem is let being become the conclusion or denouement of appearing to be: in short, icecream is an absolute good. The poem is obviously not about icecream, but about being as distinguished from seeming to be.
By the way, I had forgotten to speak of it, but pervenches is right for periwinkles.

(In a subsequent paragraph Stevens suggests the editors consider translating, too, “Fabliau of Florida”: “It is not the sense of a poem of that kind that counts, because it does not really have a great deal of sense; it is the feeling of the words and the reaction and images that the words create.” The translator of “Disillusionment of Ten O’Clock” and “The Emperor of Ice-Cream”**: Oulipo satrap and author of Exercices de style Raymond Queneau. One sees what Queneau made of Stevens’s notes:

I love that Stevens-of-the-mild-rebuke (of the literary): “Personally, I like words to sound wrong.” Recalling the subsequent (c. 1942) lines out of “The Poems of Our Climate”: “The imperfect is our paradise. / Note that, in this bitterness, delight, / Since the imperfect is so hot in us, / Lies in flawed words and stubborn sounds.” I think, too, of Stevens’s famous remark regarding “The Emperor of Ice Cream”—that it “wears a deliberately commonplace costume, and yet seems to contain something of the essential gaudiness of poetry”—one wonders if Stevens isn’t hijacking being’s “finale” with that note of something seeming “to contain . . . the essential.” Evidence of that odd dodge of Stevens: the perfectly mannered rip (“I dislike niggling, and like letting myself go”) that makes room for everything (and whatever opposes it). (In a 1947 “Homage to Henry Church” Stevens affably ticks off a page-and-a-half of just such contradictory dualities, clearly sympathizing (if not identifying) with him: “He was a simple man who had little interest in things that were not complex. He was a plain man who lived in a certain luxury which he ignored. He was most literate yet had only a few books on his table. He had read philosophy for forty years but it seemed to be, for him, pretty much a substitute for fiction.”)

One wonders what—if anything—Queneau “made” of Stevens. Is there a parallel between the Stevens of “Connoisseur of Chaos” (“A. A violent order is a disorder; and / B. A great disorder is an order. These / Two things are one. (Pages of illustrations.)”) and the Queneau who spent some years putting together a critical anthology of the writings of so-called “fous littéraires,” fossicking the recesses of the Bibliothèque Nationale for works (“inevitably published at their author’s expense”) by eccentrics, naïfs, madmen, and geniuses (only to find “little to be exhumed but paranoid reactionaries and long-winded old fools”)? The two do possess in common the seemingly contrary traits of both encyclopaedist and maximist. Singularity’s constant tug against the brute momentum of the ingathering factual crowd versus the stutter-y incohesions of mustered ineluctables and trailings-off. Summary versus undoing (its mountainous exemplary presence in particulars). Stevens (“A Note on Samuel French Morse”):

If we were all alike; if we were millions of people saying do, re, mi in unison, one poet would be enough and Hesiod himself would do very well. Everything he said would be in no need of expounding or would have been expounded long ago. But we are not all alike and everything needs expounding all the time because, as people live and die, each one perceiving life and death for himself, and mostly by and in himself, there develops a curiosity about the perceptions of others. This is what makes it possible to go on saying new things about old things. The fact is that the saying of new things in new ways is grateful to us. If a bootblack says that he was so tired that he lay down like a dog under a tree, he is saying a new thing about an old thing in a new way. His new way is not a literary novelty; it is an unaffected statement of his perception of the thing.

So we continue. Insufferably making our dopey monkey-shines and grimaces, oblivious of the gods, their misalliances elsewhere . . .

THE EMPEROR OF ICE CREAM

Call the roller of big cigars,
The muscular one, and bid him whip
In kitchen cups concupiscent curds.
Let the wenches dawdle in such dress
As they are used to wear, and let the boys
Bring flowers in last month’s newspapers.
Let be be finale of seem.
The only emperor is the emperor of ice-cream.

The houses are haunted
By white night-gowns.
None are green,
Or purple with green rings,
Or green with yellow rings,
Or yellow with blue rings.
None of them are strange,
With socks of lace
And beaded ceintures.
People are not going
To dream of baboons and periwinkles.
Only, here and there, an old sailor,
Drunk and asleep in his boots,
Catches tigers
In red weather.