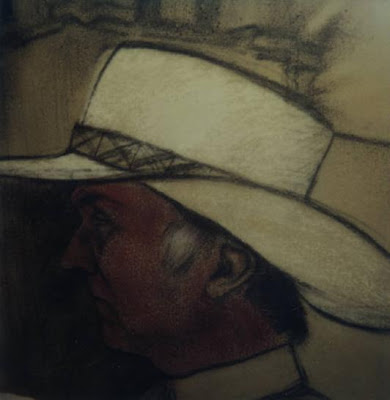 Reading, serendipitously, one of Williams’s fugitive pieces, an essay called “The Present Relationship of Prose to Verse” (out of 7 Arts [1953])—on the heels of a Hugh Kenner toss-off titled “1680 Words on Duncan’s Words” (out of the Duncan Ironwood [1983]), I am struck by the alignment of Williams’s final (rather unconvincing) paragraph (he is arguing against the ongoing prevalence of “the iambus”—and musters a series of ancient complaints against it, including that of “Gascoyne, in his ‘Certayne Notes of Instruction,’ [who, in 1575] writes of it; ‘Commonly now a days in english rimes we use none other order but a foot of two syllables, whereof the first is depressed or made short, and the second is elevated or made long . . .the iambus.’ ‘And surely I can lament’—he adds—‘that wee are fallen into such a playne and simple way of wryting, that there is none other foote to use’”)—Williams still niggling what Pound’d attempted to dismiss whole hog (“to break the pentameter, that was the first heave” in Canto LXXXI and “as for those who deform thought with iambics” in Canto XCVIII)—

Which imitating, limited and egregiously dopey though it may be, is what Kenner’d claim Duncan did. Kenner (Is it here that the kernel of what becomes—in 1987—The Mechanic Muse—with its chatper called “Pound Typing”—is formed? Kenner is clearly thinking about machinery, and using it to count the 1680 words. In Kenner’s contributor’s note one reads how the “Duncan essay arrived in one piece: a ten foot scroll direct from the word processor”):

“Give a poet a machine,” Duncan said in delight, “and he’ll use it.” Pound, his point was, had found a poetic use for every character on the typewriter keyboard, not excluding / and @, two symbols which also remind us of what typewriters were “meant” for: business letters. Men of letters of course use them too, but by habit never stray from the keys that spell words (one reason to say “men of letters”). So used, the typewriter is a mechanized quill, introducing no new possibility save perhaps the carbon copy. But Pound—it’s as if he’d recognized a keyboard instrument left lying around by inattention, and thought to find out what tunes it might be made to play.

And then what made me sit a little straighter when I subsequently read of Williams’s “sound of a locomotive approaching”:

That’s a model for thinking about some of Duncan’s playfulness, as when he noticed the word “locomotive” lying around and started taking it to pieces:

At Lake Como we saw mountains.

Though published among the “Imitations of Gertrude Stein,” that poem derives from her only the jaunty non-sequitur it uses to end with, Lake Como. For the rest, it’s intent on four queer syllables: not, in Stein’s way, undergoing their hypnosis, but in a tinkerer’s way, undoing screws, refastening. And out of bit and pieces of the word “locomotive” it contrives an acceptable imitation of how trains can sound, which is no more what the word was meant for than the Remington was meant for writing Cantos.
We may even want to reconsider “non-sequitur.” The mountains, at any rate, follow form “co co co co co como co momo,” where the train is surely laboring up-hill.”

The sorrow and irony of it all: the “acceptable imitation” still falls largely into the abyss of the iambus.

Too, there’s Duncan writing (15 June 1957) rather confusedly regarding “Xs of Harmony and Disharmony”—“with its pastiche of Whitehead and Wallace Stevens”—to Robin Blaser:

In form I wanted to let go as far as I could bring myself of any thematic development . . . and to stress a serial composition. We got the complete Webern. In which have been revelling—and what an impeccable ear he has for possible inner structures in a passage of a poem being set. “Poetry is not an art” Robert Graves said at tea: “I told Pound that poetry is not an art.” I look up again the passage in Virginia Woolf’s Roger Fry “How far, he would ask, could literature be considerd an art? Writers lackd conscience; they lackd objectivity, they did not treat words as painters treat paint . . . . . ‘that everything must come out of the matière of his prose and not out of the ideas and emotions he describes.’ Writers were moralists; they were propagandists and ‘propaganda shuts off the contemplative penetration of life before it has found the finer shades of significance. It simplifies too much.’” Virginia Woolf comments: “He lookd at the carpet from the wrong side.” The aesthetician does in seeing it as a product look “from the wrong side” and give only a clew in what he sees as to the process. Yes, it’s sadly clear that poetry is not necessarily an Art, any more than man is necessarily a Man. “An idiosyncracy magnified to the highest degree” Freud calls the constitutional intolerance of an aesthetic; and proudly claims for himself such an intolerance.

As Woolf says of Fry, one could say of Duncan: “He enjoyed his irresponsibility. It left him free to indulge his speculative genius unfettered.” The passage Duncan’s quoting:

. . . So he would be perverse and he would be disparaging. How far, he would ask, could literature be considered an art? Writers lacked conscience; they lacked objectivity, they did not treat words as painters treat paint. “Gerald Brenan is almost the only writer who has the same sort of ideas about writing as we have about painting. I mean he believes that everything must come out of the matière of his prose and not out of the ideas and emotions he describes.” Most English novels he read very few were on a par with Frith’s “Derby Day.” Writers were moralists; they were propagandists and “propaganda . . . shuts off the contemplative penetration of life before it has found the finer shades of significance. It simplifies too much.” Defoe’s simplicity delighted him; Henry James’s complexity satisfied him. But in between, what a waste, what a confusion, what a jumble of mixed motives and impure desires!
As a critic of literature, then, he was not what is called a safe guide. He looked at the carpet from the wrong side; but he made it for that very reason display unexpected patterns.

Poetry is not an art. It does not even begin as words. What happens is that there is a sudden meeting in the poet’s mind of certain incognizable, unrelated and unpersonified forces; of which meeting comes a new creature—the still formless poem. The poet feels this happening at the back of his mind as an expectance, a concentration which will persist until it is removed. First, he objectifies it by writing it in such a way that it has a general, not merely personal, context; then removes it as far as possible by putting it into circulation.

Poem as contagion. Which sounds, once made a thing to which one is constitutionally intolerant, somewhat like Freud’s “idiosyncracy magnified to the highest degree.” Oddly enough, that phrase, as used by Freud, refers not to “an aesthetic,” but to war. See Freud’s 1932 letter to Einstein: “Now war is in the crassest opposition to the psychical attitude imposed on us by the process of civilization; and for that reason we are bound to rebel against it; we simply cannot any longer put up with it. This is not merely an intellectual and emotional repudiation; we pacifists have a constitutional intolerance of war, an idiosyncrasy magnified, as it were to the highest degree. It seems indeed, as though the lowering of aesthetic standards in war plays a scarcely smaller part in our rebellion than do its cruelties . . .” Ah, Duncan. “Give a poet a quote, and he’ll misuse it.”