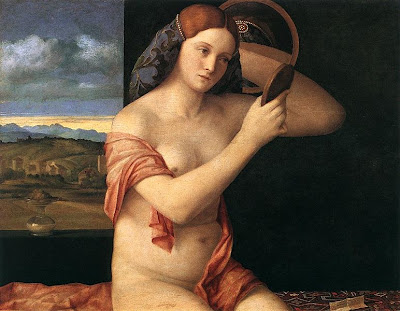 Out of the John Ashbery-edited Locus Solus III-IV (1962), the “New Poetry” number, Frank O’Hara’s “Favorite Painting in the Metropolitan”:

“these are the stairs in Funny Face”


“I don’t think Houdon does the trick”


“when I saw you coming I forgot all
about Breughel”

no we love us still hanging
around the paintings Richard Burton
waves through de Kooning the
Wild West rides up out of the Pollock
and a Fragonard smiles no pinker
than your left ear, no bigger either


“let’s go by my place before the
movies”


“but I think there’s a lot of sin
going on”

a long wait in the lists
and the full Courbets like
snow falling over piles of shit
such sadness, you love all
the Annunciations you are feeling
very Sunday take axe to palm


“they weren’t just Madonnas, they
were skies!”

so if we take it all down
and put it all up again differently
it will be the same elsewhere
changed as, if we changed we would
hate each other so we don’t change
each other or others would love us

I see the Bellini mirror and this
time you follow me seeing me in it
first, the perfect image of my
existence with the sky above
me which has never frowned on me
in any dream of your knowledge

Minor differences occur in the version printed in O’Hara’s Collected Poems (1971)—some evening-up of line lengths in the quoted material, a couple of nonsensical capitalizations (“But” in “but I would like” and “If” in “If I have a standard”). Donald Allen notes: “Dated July 31, 1961, in MS x107, from which the line divisions have been restored. First published in Locus Solus 3-4, winter 1962.” Of note, then, the (unabashedly and extendedly complaining) lines out of O’Hara’s 11 April 1962 letter to John Ashbery quoted by compiler Alexander Smith, Jr. in Frank O’Hara: A Comprehensive Bibliography (1979):

. . . how come you set up [the poem] like that, since it would obviously have fit correctly on the page with the simultaneous arrangement of stanzas and quotes, which is the way it’s supposed to read, if you just split the quotes into two lines (as I had already done for some of them in the ms.)? . . . putting the quotes between the stanzas is embarrassingly banal and precisely what I did not mean by having them in the poem at all, besides which the whole order of the stanzas is completely fucked up so the poem hardly means anything at all except like imagined connectives as in subway-john reading. For instance, stanza 1 is now stanza 4—accidentally the last stanza is still the last stanza but it is now connected with “oh shit! a run” which is hardly the same thing as having the poem end that we are going back to his place before the movies and / or / because we both feel so enthusiastic about his always having imagined my childhood as being like the infant in that Bellini—not that I might not have wanted the effects that do occur accidentally on some other occasion, but I didn’t want them here. Okay, end of complaint, I’m sure that it was the typesetter’s fault—it’s just that I don’t really mind mistakes because anyone can usually tell they are mistakes and get the right thing anyway, but in this case it seems as if someone just decided they liked the stanzas better that way than the way I intended and went ahead and did them that way . . .

(I detect a hint of Stein-talk eking in . . .) The “Favorite Painting in the Metropolitan” manuscript (reproduced in Frank O’Hara: A Comprehensive Bibliography) makes O’Hara’s two-column design and intent unmistakable: simultaneity and feint, the sparring reciprocity of exchange, the grand impermanence of everything. 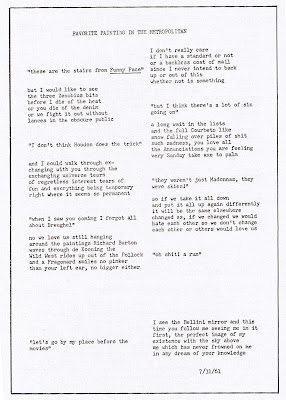 Frank O’Hara’s Manuscript of “Favorite Painting in the Metropolitan”


Is it here that Ashbery’s own “Litany” (“The two columns of ‘Litany’ are meant to be read as simultaneous but independent monologues”) finds its beginnings? Undoubtedly a ready hazard lies in the pursuit of any ghost, and O’Hara’s lithe protean slip is nigh ubiquitous in some “environs.” Thumbing the pages of Ashbery’s “Litany” though, isn’t a fleeting O’Hara caught just there where one of the monologists pauses, so that one is able to tune in to the second, saying clearly:

No one said it would turn out this way
But of course, no one knew, and now most of them
Are dead.
One, however, still looms,
Billboard-size in the picaresque
Night sky of eleven years ago. And whose
Hand is it, placed comically against your throat,
Emerging from a checkered cuff? Because a long time ago
You were promised safe-conduct
From a brief, mild agony
To these not-uninteresting pangs of birth
And so, and so, a landscape always seen through black lace
Became this institution
For you, inflected, as we shall see,
From time to time by discreet nautical allusions
And shreds of decor, to amount
To these handfuls and no other: a reminder
To keep it soft and straight forever as long
As no other pick up your ringing phone.

The “eleven years” (Ashbery likely wrote “Litany” c. 1977—he performed part of it with Ann Lauterbach in Cincinnati in 1978—O’Hara died 25 July 1966), the Pasternakian “safe-conduct,” the “nautical allusions,” the ringing telephone. The world shimmers with any ghost pursued.

* Though Bellini’s terrific “Young Woman at Her Toilet” might seem to fit O’Hara’s “Bellini mirror” reference, I can’t with any certainty put it “at” the Metropolitan mid-summer 1961. Meaning I remain wholly in ignorance regarding the identity of O’Hara’s “Favorite Painting in the Metropolitan.”