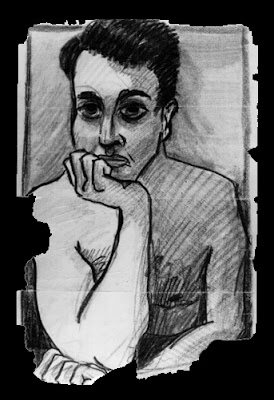 From the absolution by a black-stoled Benedictine with aspergillum and censer (te supplices exoramus pro anima famuli tut Ezra) four gondoliers in their Sunday best brought the coffin through the Palladian doors of San Giorgio Maggiore where it had lain before the altar in a solemnity of Gregorian chant and Monteverdi and set it with tricky skill among heaps of flowers in a black gondola from the stern of which thirty-five fat coral roses rode in high solitary splendor as it moved across the laguna, nodding and dipping their red into the Adriatic.

Guy Davenport at the funeral of Ezra Pound. The “tricky skill” of the humor-buttressed high solemn mode: sign of enduring love. Yesterday a long roundabout at the wheel of the Vibe, through some “weather.” The usual zig-zag of reverie made flat by the need to attend to the road itself. A short hard sleep. Up to some inches of wet snow pulling at all the earth’s ascendants. A striped skunk dolphining through it, arch and dive, arch and dive. Rousing up the degree of vigilance during the six a.m. dog outing, “nervous in the snow.” Duncan “After Reading Barely and Widely”:

Poetry, that must touch the string
for music’s service
is of violence and obedience a delicate balancing.

Sexual, that délicatesse: avid restraint aiming to cousin with stretched-taut abandonment. (Davenport talks of Pound keeping an eye on “the sources of energy, guiding us to the neglected ones, guarding them from contamination.” The “strain” of contraries.) I recall Duncan’s talk of Virginia Woolf in The H.D. Book:

Somewhere, working on Mrs. Dalloway or on The Waves, Virginia Woolf had the sensation of digging out a space in which her characters had their existence. “Whenever I make a mark,” she says of working on The Waves, “I have to think of its relation to a dozen others.” These are the rudiments of a projective-feeling in writing, of composition by field. August 30th, 1923, she writes of Mrs. Dalloway in progress: “The Hours and my discovery: how I dig out beautiful caves behind my characters: I think that gives exactly what I want; humanity, humor, depth. The idea is that the caves shall connect and each comes to daylight in the present moment.” Monday, October 15th: “It took me a year’s groping to discover what I call my tunneling process, by which I tell the past by installments, as I have need of it . . . One feels about in a state of misery—indeed, I made up my mind one night to abandon the book—and then one touches the hidden spring.”

Tunneling into daylight. Think of Woolf’s short story called “Kew Gardens” (1919)—Woolf’s snail a harbinger of the ant-centaur of Pound’s Canto LXXXI (“Learn of the green world what can be thy place / In scaled invention or true artistry”):

. . . the snail . . . now appeared to be moving very slightly in its shell, and next began to labour over the crumbs of loose earth which broke away and rolled down as it passed over them. It appeared to have a definite goal in front of it, differing in this respect from the singular high-stepping angular green insect who attempted to cross in front of it, and waited for a second with its antennae trembling as if in deliberation, and then stepped off as rapidly and strangely in the opposite direction. Brown cliffs with deep green lakes in the hollows, flat, blade-like trees that waved from root to tip, round boulders of grey stone, vast crumpled surfaces of a thin crackling texture—all these objects lay across the snail’s progress between one stalk and another to his goal. Before he had decided whether to circumvent the arched tent of a dead leaf or to breast it there came past the bed the feet of other human beings.

The audacity of Woolf’s p.o.v. (Akin, isn’t it, to that of Albert York in the uncannily unmediated “Three Red Tulips in a Landscape with Horse and Rider”? Looking at York’s painting directly triggered my recall of the Woolf story.) 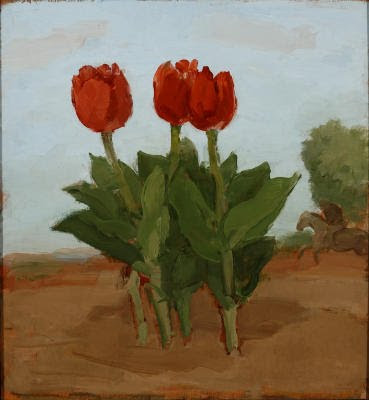 Albert York, “Three Red Tulips in a Landscape with Horse and Rider,” 1982

A concentratio that can only mock the “irregular and aimless movement” of the human passersby (“Pull down thy vanity”). In one letter (2 July 1959) to Robin Blaser, Duncan recalls “Pound’s hope that we might practice concentratio versus the dogmatic ravings.” (Isn’t dogma a purely human pitfall: “< ancient Greek δογματ- , δόγμα that which seems to someone, opinion, belief, doctrine, decree . . .”?) Truth is, I love the post-absence roiling vacuity slowly vivifying the zero-groundedness of the snowy reaches, that striped skunk bounding up out of the gutter, sheer impropriety arriving without notice to make itself at home. Duncan again in the balance, domestic and wild:

Today the spirit jumps up; there’s too much to do! We spent part of the morning cleaning house, and I spent a couple of hours sorting glass preparatory to the new window for James. With my mind still thronging with impulses to work there—hence perhaps the sharpening of the eye to be questioned by friend rose. I want a flowering without representing flowers. Newly opening and upthrusting artichoke plants ask a question of design too. There are studies growths, and then, an oriental poppy in bloom amidst scattered Californias, urges an almost careless, well—an abandond beauty.