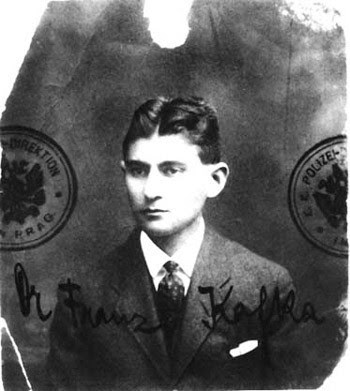 Two days go “by” and any sense of an emergent arc of intent: vamoosed. Back to zero, thumbing the memory-schmutz’d Baedeker of my own godless geniza, my too-dandled word-hoard, my trappings and impingements. (Gazing at the red and white spine of An Anthology of New York Poets (1970) I recall, not Ashbery’s Audenesque “On the secret map the assassins / Cloistered . . .” nor O’Hara’s Swank-published (in a Seymour Krim-edited colloquy called “The Swinging Modern Scene”) “Ave Maria” (“sheer gravy”), but lowly Ed Sanders’s immemorial “Elm Fuck Poem”:

in to the oily crotch
place dick

Et, like the scholiasts say, cetera. Undoubtedly my acquiring and reading said livre at the age of sixteen tamped down that particular piece of wadding “in to” the brain’s unfired pan . . .) Is memory, too, like Kafka’s pen, “only a seismographic pencil for the heart”? (Out of Gustav Janouch’s Conversations with Kafka, newly re-released by New Directions.) Kafka (in Janouch’s hand) capable of comic book wars with God (or whatever one calls the primordial gist—“Heaven captured in a drop of water . . . distorted and blurred by our slightest movement”), that thing unnamable, apprehended only through being—a kind of perennially interrupted agon—itself. Kafka:

The fact, to which we give different names, and which we try to apprehend by various processes of thought, pervades our veins, our nerves, our senses. It is within us. For that reason perhaps it’s invisible. What we can really grasp is the darkness. God dwells in it. And this is a good thing, because without the protecting darkness we should try to overcome God. That is man’s nature. The Son dethrones the Father. So God must remain hidden in darkness. And because man cannot reach him, he attacks at least the darkness which surrounds the divine. He throws burning brands into the icy night. But the night is elastic like rubber. It throws them back. And by doing so it endures. The only darkness which passes away is that of the human spirit—the light and shadow of the drop of water.

I think of bug-eyed Tom Veitch, tongue thrust out in an adamantly “madcap” pose for the photographer (see Veitch’s biographical note in An Anthology of New York Poets: “Lately in San Francisco undergoing various love torments and the painful emergence of God in his flesh. Hi folks”)—art’s own skew ways of throwing “burning brands into the icy night.” I probably didn’t, aged sixteen, read Veitch’s tiny piece of (I assumed) faux-naïveté called “The Finest Thing”:

The finest thing in the world
Is God and his works
Oh how I marvel at them,
Oh how I cry when I
think of dying and going into
heaven and God and becoming
part of it all. Oh how
marvelous, how
nice, how lovely to be
part of all this.

Custer was the last man in his regiment to die. The story goes that, on his knees, wounded in a dozen places, his yellow curls flying in the wind, he roared with laughter. A small Indian boy bent over the dying hero, eyes wide with wonder. We watched from a distance as the boy’s steel knife flashed in the hot afternoon sun. Crimson, the flow from the scalp as it separates from the skull . . .

You must search for the loveliness of America; it is not obvious; it is scattered; but when you find it, it touches you and binds you and makes you take a great, silent oath . . .

On the back cover of Antlers in the Treetops, unsigned, presumably tongue-in-cheek: “Imagine an almost complete trace of meaning.” Read next to Kafka’s brand-deflecting night, isn’t that as good a definition of the divinity’s inexact whelming as any?) How would Kafka read something like the series of imperatives André Breton and Paul Éluard assemble under the title “The Original Judgment” in The Immaculate Conception (1930)?

Don’t read. Look at the designs created by the spaces between the words of several lines in a book and draw inspiration from them.
Give your hand to the others to keep.
Don’t lie down on the ramparts.
Take back the armor that you took off when you reached the age of discretion.
Put order in is place, disturb the stones of the road.
. . .
What you find belongs to you only as long as you hold out your hand.
Lie as you bite the judges’ ermine.
You are the pruner of your life.
. . .
Learn to wait, with your feet in front of you. That’s the way you will soon go out, all covered up.
Light up the perspectives of fatigue.
. . .
When they ask to see the inside of you hand, show them the veiled planets in the sky.
. . .
Adjust your gait to that of the storms.
Never kill a night-bird.
Look at the convolvulus blossom: it does not allow one to hear.
. . .
Argue that your head, unlike a horse-chestnut, is absolutely weightless since it has not yet fallen.
Gild with the spark the otherwise black pill of the anvil.
Without wincing, imagine swallows.
Write the imperishable in sand.
. . .
Do you want to own the smallest and the most alarming book in the world? Have the stamps on your love letters bound and then weep—you have good reason to in spite of it all.
Never wait for yourself.
Look closely at those two houses: in one you are dead in the other you are dead.

(Translated by John Ashbery. Out of the Kenneth Koch-edited “Collaborations” issue of Locus Solus.) Sounds like Kafka. Perhaps Kafka’s pull is that of a magnet, aligning all other writing to it, invading the roundabout, leveling the field. (I think of Janouch’s reported glimpse of a Kafka drawing “covered with strange minute sketches, in which only the abstraction of movement was empathized, of tiny men running, fighting and crawling, and kneeling on the ground.”