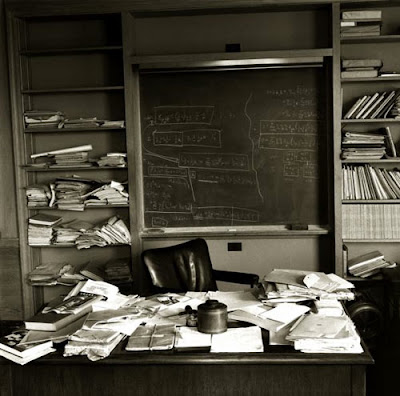 A dense, granular inch or so of snow. Sleeplessness. Coleridge (out of a letter to Joseph Cottle, early April 1797): “I should not think of devoting less than 20 years to an Epic Poem. Ten years to collect materials and warm my mind with universal science. I would be a tolerable Mathematician—I would thoroughly know Mechanics, Hydrostatics, Optics, and Astronomy, Botany, Metallurgy, Fossilism, Chemistry, Geology, Anatomy, Medicine—then the mind of man—then the minds of men—in all Travels, Voyages and Histories. So I would spend 10 years—the next 5 to the composition of the poem—and the last 5 to the correction of it. So would I write, haply not unhearing of that divine and rightly-whispering voice, which speaks to mighty mind of predestinated garlands, starry and unwithering.” (Odd how assuredly all the earnest preparatory diligence is junked at the moment of the writing, and how coyly—“haply not unhearing”—Coleridge welcomes that “divine . . . voice” with its “predestinated garlands.”) I think of the heroics of Gustave Flaubert writing Bouvard et Pécuchet. with its Flaubert’s quip of a supposed subtitle: “On the lack of method in the sciences.” He writes to Madame Roger des Genettes (24 January 1880): “Do you know how many volumes I’ve had to absorb for my two characters? More than fifteen hundred! My pile of notes is eight inches thick. This superabundance of documents has enabled me to be free of pedantry: of that I’m sure.” “A sort of “school thyself, pedant” approach—“that thy unflawed soul make soonest speak.” (Later in the letter Flaubert admits what may be—for him—the prime raison d’être for socking oneself away in an extended bout of study, “collecting materials”: “I’ve spent two and a half months absolutely alone, like a bear in its cave, and have come through perfectly well even though seeing no one: I’ve heard no stupid remarks. Inability to tolerate human stupidity has become a sickness with me, and that word is weak.”) I recall Tim Reynolds (mid-’eighties) pointedly conjecturing what Flaubert-with-a-computer would have achieved in Bouvard et Pécuchet. Likely a “pile of notes . . . eighty inches thick” is what I think. And with the same complaint: “riddled with doubts and utterly exhausted.” (Kenneth Goldsmith, in either case, would simply bind up the notes and smugly pronounce the book complete.) William Carlos Williams, in a letter to Kenneth Burke (25 February 1947), arguing the primacy of instinct (the secularist’s “divine”):

I do not believe you think Virgil formulated any such preliminary plan as this before beginning composition in the Aeneid. He was an alert and intelligent citizen of his times and besides a gifted poet; he saw a need (he also saw words) and must have felt a tremendous pleasure of anticipation. In composing the poem he felt an undoubted pleasure—of various sorts: sensual, sociological, historical identification, and so forth. He may, at an outside guess have indulged in a bit of logical philandering—if he found the time for it in a dull moment! But that he set down a primary scheme and followed it I can’t for a moment believe.

Brilliant, that “logical philandering”—reducing logic to the object of casual off-hours flirting, hardly serious. Williams: “The nascent instincts are the feelers into new territory—even Einstein has recently acknowledged or stated that. Deductive reasoning is in the main useless to us today or if not useless at least secondary in value.” Out of Williams’s rather giddy 1921 “St. Francis Einstein of the Daffodils” (a poem considerably revised some fifteen years later):

April Einstein
through the blossomy waters
rebellious, laughing
under liberty’s dead arm
has come among the daffodils
shouting
that flowers and men
were created
relatively equal.
Oldfashioned knowledge is
dead under the blossoming peachtrees.

Einstein in Berlin, in 1929, replying to a query by one George Sylvester Viereck—poet, journalist, Nazi apologist, friend of Nikola Tesla, and father of U. S. poet and Conservative nobodaddy Peter Viereck—regarding the fons et origo of Einstein’s theories, Viereck asking “How do you account for your discoveries? Through intuition or inspiration?” Einstein:

Both. I sometimes feel I am right, but do not know it. When two expeditions of scientists went to test my theory I was convinced they would confirm my theory. I wasn’t surprised when the results confirmed my intuition, but I would have been surprised had I been wrong. I’m enough of an artist to draw freely on my imagination, which I think is more important than knowledge. Knowledge is limited. Imagination encircles the world.

A bromide? Or a bromide only in any other setting? I think of Williams’s lines (Spring and All), that reverie of—

A world detached from the necessity of recording it, sufficient to itself, removed from him (as it most certainly is) with which he has bitter and delicious relations and from which he is independent—moving at will from one thing to another—as he pleases, unbound—complete

and the unique proof of this is the work of the imagination not “like” anything but transfused with the same forces which transfuse the earth—at least one small part of them.

Forces assuredly akin to “that divine and rightly-whispering voice” offering up, detached, its “starry and unwithering” world.