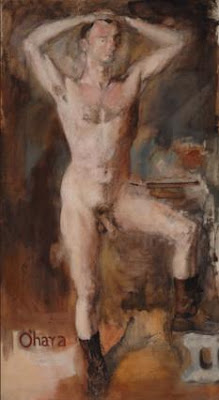 The original of the “Statement” for The New American Poetry: 1945-1960—the one beginning “I am mainly preoccupied with the world as I experience it”—opened with a rare O’Hara clunker: “Poetry is life to me.” Whether editor Donald Allen suggested the cut, or O’Hara recovered a momentary loss of sense: aucune idée.

O’Hara, editor. Donald Allen noted (in a letter to Alexander Smith, Jr., compiler of Frank O’Hara: A Comprehensive Bibliography, dated 18 July 1977): “. . . Frank was responsible for including Edward Field, whom he had known in the early and middle fifties . . . [and he] also suggested certain poems, “Fresh Air” [by Kenneth Koch] for example. One Sunday morning in the winter of [1959-60], he dropped by while I was pasting up the final dummy . . . I was thinking of cutting some poems to reduce what seemed like an enormous size, including his ‘Ode to Mike G[oldberg (’s Birth and Other Births)]’; but he declared that it was his ‘greatest’ poem and I’ve been very glad even since that I left it in.”

Frank O’Hara to Lawrence Ferlinghetti of City Lights Books (18 September 1964) regarding Lunch Poems: “What color is lunch? Maybe some sort of lipsticky red? (My favorite colors are actually orange and blue.)”

O’Hara, procrastinator. John Bernard Myers (writing to Smith, 24 August 1976) regarding the assembling of Love Poems (Tentative Title) (Tibor de Nagy, 1965): “I waited for these poems for three or four years; Frank could never get himself to type them up. When he did give them to me I couldn’t induce him to arrange them in their proper sequence nor give me a title. I wrote ‘Love Poems (Tentative Title)’ on the first page, then arranged them so that the sequence would show the beginning of a new love, its middle period of floundering, the collapse of the affair with its attendant sadness and regret. Frank liked the arrangement and my ‘tentative’ title. And that was that. The edition was sold out within a year.” Four hundred and eighty copies.

O’Hara, procrastinator. Writing to Ferlinghetti (8 September 1964) regarding Lunch Poems: “. . . I really admire the way you ‘put things together’ and would prefer it if you did it, with only the suggestion that maybe it should end with something like ‘Rhapsody’ or maybe something lunchy like ‘Adieu to Norman, Bon Jour etc.’ . . . I don’t care about the chronological arrangement, though I think maybe the day of the year after each might be useful, as it is in Allen [Ginsberg]’s Reality Sandwiches . . .” Lunch Poems ends with “Fantasy.”

O’Hara to Henry Rago, editor of Poetry (21 October 1959): “. . . I did nine odes and they are being published by Tiber Press with silk-screen color prints by Michael Goldberg (called Odes, simply enough) in a limited edition . . . The format looks terrific and all the artists did superb prints, though I haven’t seen any of the finished copy as it won’t appear till early 1960. I am, for better or worse, quite proud of the odes and happy that they will appear together, and with Mike Goldberg’s prints since he has influenced me a lot and they will perhaps emphasize an abstract quality in my poems which is usually not noticed (because I am so chatty withal!)” Reading some of the odes at Buffalo (25 September 1964), O’Hara remarked: “I don’t exactly know why, but I wrote a series of odes . . . in 1959, because, partially, I had never dared write an ode, because I thought it was so formidable a thing to write. So then I decided that I should just write some poems and call them odes, and with a little luck it would all work out.”

O’Hara’s Hopwood-winning manuscript of 1951. Judges: Karl Shapiro, Louis Untermeyer, Peter Viereck. O’Hara submitted it under the (required) pseudonym of “Pablo Pasternak.” Writing to Jane Freilicher (8 March 1951) amid the assembling: “I have had to go over all my oeuvre for the contest to compile a musculature for them to look at (this sentence is based on the criticism of Edith Sitwell), and a shitty site [sic] (I can’t help this, I must be going crazy with all these Schoenberg records forever dinning dinning dinning in my ears!) it looks to me. Unfortunately for my peace of mind I thought haphazardly of dividing the mess into three sections; serious poems, light poems, and plays. But alas! the three sections are all irrelevant to any concern of my own for myself, and the light poems are the most truthful, so there you are.”


The Tiny Boat of the Self Dashed by a Bigger Wave

O’Hara subsumed by history. Regarding the smallish 1953 poems—

is it sadness or the perfection
of eyes that clutches him?

And then faster and faster
the saline gushes of knowledge

O’Hara wrote to Larry Rivers (27 June 1953): “I was listening to a Chopin Nocturne when I woke up and suddenly I felt so unalterably great just by the contact with it that I swear I must have thought I was Homer at the edge of the sea and I suddenly thought of how words in one’s head boom and crash like the sea and do, corny as it sounds, keep ebbing before one ‘gets’ them. The most one can seize is merely a splinter of some magnificent edifice one had just apprehended, like that famous submerged cathedral. And it doesn’t matter, because one gets something at least that one didn’t have, just as the poems are slight, but mean a great deal to me.” Another way of saying: “Poetry is life to me.”