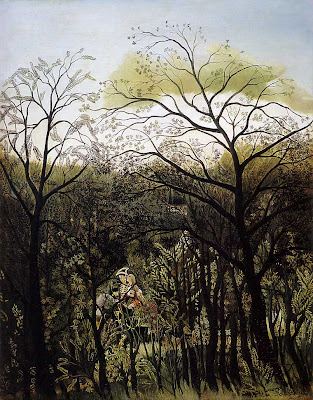 Henri Rousseau, “Rendezvous in the Forest,” 1889

You’d think, after a couple of days unharrowed (or un-discharged) by writing, a glut would out, some gleaming undulant pile of percepts and particulars, a cat-ejected tapeworm on the patio. No. Ardency cooled by remittance. Testimony tweaked by partiality. Some splendid bouts of reading, that sweat-equity, against an excess of hardy scriptural chores . . .

The indomitable Marianne Moore, in “The Ways Our Poets Have Taken in Fifteen Years Since the War,” a review of The New American Poetry: 1945-1960:

In his “Statement on Poetics,” Mr. Olson advocates open form or “composition by field,” projective or field composition being offered as an improvement on inherited or “non-projective” form. Inherited non-projective form can be projective, I would say, and projective form may be weedy and colorless like suckers from an un-sunned tuber. Kenneth Burke’s observation in Counter-Statement, it seems to me, applies both to the “field” and to the “library”: “a work may be said to have form in so far as one part leads a reader to anticipate another part and be gratified by the result.” Elsewhere, “Great artists feel as opportunity what others feel as a menace. This ability does not, I believe, derive from exceptional strength; it probably arises purely from professional interest the artist may take in his difficulties.” As a composer’s directions influence the performer’s interpretation, punctuation aids precision, and precision is the glory of the craftsman; syntax being equivalent to the staff in music, without which interpretation would sure overtax the performer. (Intentional ambiguity and inadvertent ambiguity, need it be said, are not the same, the perfect analogy for intentional ambiguity being Rousseau’s “Rendezvous in the Forest,” in which the illusion is the more precise by the fact that the adjoining horses—the dapple and the black—are so merged as to be almost indistinguishable.)

Precision and restraint against the seemingly resent-fueled huffing and puffing of Olson (see, in a letter to Creeley dated 5 May 1952, mid-complaint about “the lie in Stevens”—“however much the pleasure in his the play of words, is his language, that, it is without rhythm because it is without passion which is person (not personae, that further device against mass)”—how Olson veers off into helpless innuendo and taunt—

It gets so goddamned neat instead of a matter of insight by way of the sounds as well as the petit point
(even this cult of M. Moore, this Brooklyn sappho they all sit on their hands over: that spinner, their last penelope, that the brightness is lighting a la La Fountain . . .

Creeley’s reply—unknowingly designed to illustrate Moore’s fastidiously derisive remark made later in the review regarding expletive as “earmark of incompetence”: “Slater once wrote me how this same Sappho of Brooklyn used to nag at Hart Cane, on all the things he sent to the Dial, etc., etc. Isn’t this word too strong, isn’t that adjective too strange, isn’t this line weak, isn’t that not what you mean, isn’t—fuck it. Fuck it UTTERLY.” Boys, boys . . .)

Randall Jarrell (in “Her Shield”), even whilst applauding Moore’s restraint, would seem to insert doubt in the very catalogue of what’s lacking:

Her restraint, her lack—her wonderful lack—of arbitrary intensity or violence, of sweep and overwhelmingness and size, of cant, of sociological significance, and so on, made her unattractive both to some of the conservative readers of our age and to some of the advanced ones. Miss Moore was for a longtime (in her own phrase about something else) “Like Henry James ‘damned by the public for decorum,’ / not decorum but restraint.”

That coming after Jarrell’s warm-up list of the poems’ “almost ostentatious lack of transitions and explanations, the absence of romance and rhetoric, of acceptedly Poetic airs and properties . . .”

Is it Moore’s canny projecting of Olson’s declaredly rumbustious and world-beating “composition by field” (Olson: “If the beginning and the end is breath, voice in its largest sense, then the material of verse shifts. It has to. It starts with the composer. The dimension of his line itself changes, not to speak of the change in his conceiving, of the matter he will turn to, of the scale in which he imagines that matter’s use”) back into, too, the “library” that recalls Virginia Woolf’s rather sassy remark in Orlando: “Green in nature is one thing, green in literature another. Nature and letters seem to have a natural antipathy; bring them together and they tear each other to pieces.” A provocatory not unlike Moore’s own. Or there’s Orlando, exploring his lineage (“he would take a skeleton hand in his and bend the joints this way and that”) going into paroxysms of potentiality, only to abandon “the cardinal labour” for reading:

“Whose hand was it?” he went on to ask. “The right or the left? The hand of man or woman, of age or youth? Had it urged the war horse, or plied the needle? Had it plucked the rose, or grasped cold steel? Had it―” but here either his invention failed him or, what is more likely, provided him with so many instances of what a hand can do that he shrank, as his wont was, from the cardinal labour of composition, which is excision, and he put it with the other bones, thinking how there was a writer called Thomas Browne, a Doctor of Norwich, whose writing upon such subjects took his fancy amazingly.