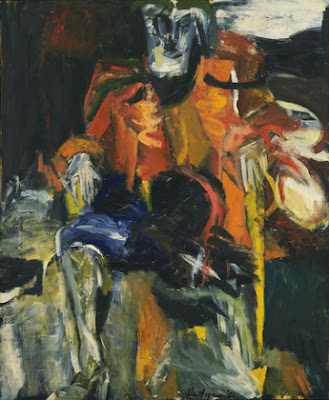 Drenching rain: scooting through it in my yellow “gear” (with the clownish ineffectual trousers). Wet saddle. Wet handlebars. Wet wheels. Reading The Journals of Grace Hartigan, 1951-1955. Stuck briefly pursuing the word “liana” (or “lianas”) around the O’Hara opus (I see John Bernard Myers using it—“The paintings . . . are like lianas, reaching with fresh tentacles to form tangles of density”—in the catalog for “George” Hartigan’s 1951 exhibit). (Myers claims, too, rather incoherently: “Hartigan asserts the electric, New York optimism and rejects the undertow of the néant,” and hints that the work holds “a portent of escape from the labyrinth of the contemporary malaise.”) My hunch that Myers’s “liana” is O’Hara’s “liana” (in the 1954 “Kitville”—“and garish her lips / as they parted! a piano / of grassy incidents / twined with the liana // of her wet arms! / behind the bath house / sweet as a wash basin, / her smilings, her pathos”—and in the 1959 “Rhapsody”—“portal / stopped realities and eternal licentiousness / or at least the jungle of impossible eagerness / your marble is bronze and your lianas elevator cables / swinging from the myth of ascending”) dashed by research (forgetting, too, the era’s Tarzan appetites, nearly as voracious as its cravings for French existentialism). Some of Hartigan’s mots, mostly undated, though proceeding chronologically (and wherein I bracket to interject):

Out of all colors but earths, reds, white and black. A little cobalt. It will be interesting to see if I can work with these limitations.

[Consider a writing limited by one’s being unable to afford the purchase of, say, verbs. Limited by necessity, not by the fashion-dictates of “constraint.”]
—
It seems that I must first make complete chaos on a canvas before I can find any order.

“One must have chaos within one to give birth to a dancing star.”

[Quoting Nietzsche (Thus Spoke Zarathustra): “I say to you: one must still have chaos in oneself to be able to give birth to a dancing star. I say to you: you still have chaos in you. Alas, the time is coming when man will no longer give birth to a star. Alas, the time of the most despicable man is coming, he that is no longer able to despise himself. Behold, I show you the last man.”]
—
Oct 29 [1951]
I know for me the “all-over” picture is finished. It had become a formula . . . It isn’t only a joke to say my “lyrical period” has ended . . .
—
Oct 30
The all over picture has died.
—
Nov 6
These new things are still too knowing. I must reach somehow into the complete unknown for my search . . .

The only way to discover oneself is to paint from the areas of blind, inspired feeling. How to reach into there is the problem. These new pictures are what I should have been doing months ago, now I must find what I should be doing now.

I must not paint pictures which are comforting to my eyes.

To shock the bourgeois is easy—to shock the “avant-garde,” that’s the thing. To shock oneself is the most important of all.

I am nauseated with the expressionistic, the baroque, the active surface, the rhythmic. We must be massive and ugly to find something new.

[Vouchsafe of Hartigan’s seriousness, “authenticity,” that continuous refusal of the “current means,” naysaying the platitudes of the new. N’oubliez jamais Barthes: “a Doxa (a popular opinion) is posited, intolerable; to free myself of it, I postulate a paradox; then this paradox turns bad, becomes a new concretion, itself becomes a new Doxa, and I must seek further for a new paradox . . .” Inevitably, the “avant-garde”—and its camp following— newly arrived, adores complacency.]
—
Nov 21
“Pumpkin’s World” now “The Horseman”
—
I find the things of mine which interest me most now are those dealing in some sense with the “subject” or “object.” A very difficult thing to pursue after the painting of the last 25 years.
—
“Pure” painting à la New York School just doesn’t excite me these days, and in a way I feel alone in my direction . . . What in hell I’m driving at I don’t know.
—
I really loathe expressionist painting down to the last splashy brush stroke. There is something about Matisse—In the end though all these ideas mean nothing—you have to paint your way through it. No rules, I must be free to paint anything I feel.

[Recalling Hartigan’s reporting Clement Greenberg’s complaint that de Kooning’s “trying to talk himself into a position that he can only paint himself in . . .”]
—
Strange how old hat the extreme can look when the basis isn’t firm enough . . . All that Bauhaus business is so dead. It’s a mistake to try to be new, “up-to-date.”
—
April 18 [1952]
Tuesday I begin work at a drafting job for about two months. It means giving up painting entirely for that period, but I hope to save enough money to paint without interruption thru the whole summer. One thing it will do which is good at this time—cut off daily phone conversations with John [Bernard Myers], hence all gossip and petty arguments, involvements in politics of the stinking art world. I’ll see a few people in the evening from time to time and generally try to mull over what I feel about my working direction. Feel a need to cut myself off from everything.
—
I do need a prop in some way, perhaps it will be “nature.”
—
I don’t know what I’m after but whatever it is, if I must look conservative—reactionary—timid—or even (horrors) feminine—in the process then it must be. I think I know how really strong I am, and if a great painter like Matisse could paint weakly and timidly to clear his eyes for what was to come then I can too. I don’t fear painting a bad picture or a weak one now. Oh, the mystery of the image. Nature, you monster you. I was on the edge of succumbing to the need of looking “modern” –abstract—contemporary.

All of which is fashion, not painting, and is most dangerous.
—
Saw the “Demoiselles d’Avignon” again at the Mod. Museum and something clicked, who knows what.

[Isn’t, I think, Hartigan’s “Grand Street Brides” a perfect amalgamation of Picasso’s “Les Demoiselles d’Avignon” and Velázquez’s “Las Meninas”? Hartigan says (of working with O’Hara on Oranges: “Inspired by Frank’s combination of ‘high’ art and popular culture, I began painting images from my Lower East Side neighborhood. Grand Street Brides was based on Goya’s Royal Family and used gowns from a bridal shop on Grand Street.”]
—
Another thing I found through a talk with de Kooning is that what I’m looking for in my painting is my “world,” my content. It’s a very serious thing and I must have time to be quiet with myself in order to find it.
—
I don’t mean by this that I’m interested in “lofty” themes, but that when I try to paint a specific person, incident or place I feel too restricted, too bound to it (the idea) and not to the painting. This is all very well but now where to begin?

[Uncanny how close Hartigan’s remark is to O’Hara’s note about the “lofty” in “Personism”: “I’m not saying that I don’t have practically the most lofty ideas of anyone writing today, but what difference does that make? They’re just ideas. The only good thing about it is that when I get lofty enough I’ve stopped thinking and that’s when refreshment arrives.”]
—
Aug. 15
“After all, the nature of truth is this—one’s life work might end up called ‘A Trip to the Zoo.’”—James Schuyler

Apply to present conditions where needed. 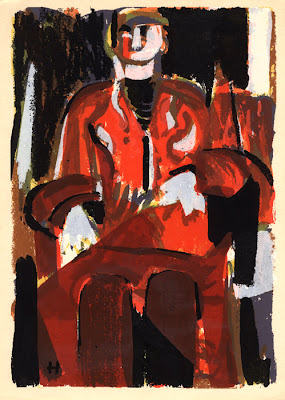 Grace Hartigan, “The Persian Jacket,” 1953
(Seriograph after the 1952 oil painting for the premier number of Daisy Aldan’s Folder, out of the terrific digital exhibit “Imagine! Painters and Poets of the New York School” mounted by the Special Collections Research Center at the Syracuse University Library.) 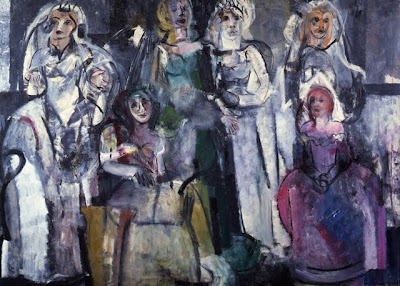 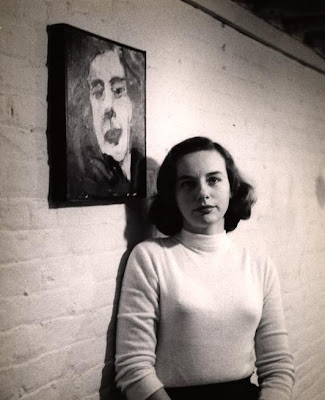